Uncovering the Ruined City of Pompeii

What was once a bustling maritime city is now one of the world’s most fascinating archaeological sites. Located at the foot of the ever-threatening Mount Vesuvius volcano, Pompeii was once one of the most advanced cities of the Ancient Roman Empire. Following the historic eruption of Mount Vesuvius in 79 A.D, this thriving metropolis was buried under six meters of ash and pumice-stone and destined to remain frozen in time for all eternity. Transport back in time with a Pompeii day trip from Rome or Naples and uncover the ancient city’s most interesting sights with this handy guide.

The main square of any Ancient Roman town is the Forum. Normally rectangular in shape and enclosed by giant colonnades the Forum was once a central marketplace and meeting point for Roman societies. Just like any ancient Forum, important buildings, shrines and temples surround the square, offering a fascinating insight into the society that thrived within their walls. Some of the most notable of these include; the Temple of Jupitar which sits to the north of the square. Equally interesting is the Macellum which served as a roofed market for buying and selling food and livestock. The Shrine of the Lares and the Temple of Vespasian are situated close-by, both were used sacred places of worship by this ancient society. Perhaps the most significant of all the buildings is the Curia. The Curia was a house of authority where senators would meet and decisions for the town would be made. A ruined basilica also faces onto the Forum, historians believe that this was used as a court of law. To its left, you’ll find the opulent Temple of Apollo, adorned with 48 ionic columns. 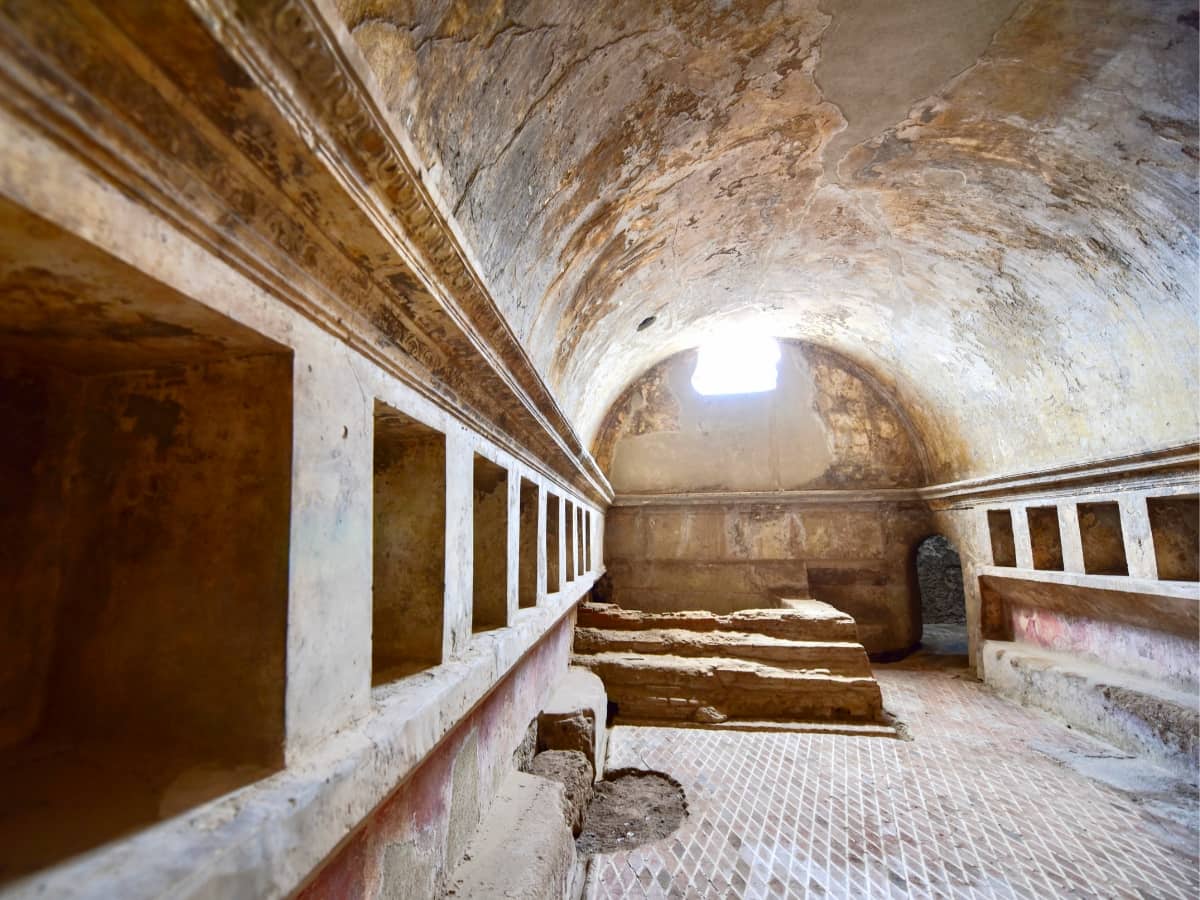 Public bathing houses were popular meeting points during Ancient Roman times. Although today we consider bathing a very private activity, bathing in Ancient Rome was a communal and very social pastime. While some wealthy Romans could afford to build their own bath at home, most classes in society opted to bathe in public baths, much like the spas we frequent today. The Terme Stabiane or Stabian Baths of Pompeii are a perfect example of a typical 2nd Century bathing complex. This highly sophisticated complex comprised of three baths in total, each serving its own purpose and even maintained at a set temperature. Bathers would first enter the apodyterium, this vaulted chamber is similar to our modern-day changing rooms. Upon undressing bathers would plunge into the center’s frigidarium pool. As the name suggest this was a cold-water pool. Following the intense chill of the frigidarium, bathers would then enjoy the more temperate warmth of the tepidarium before finally immersing in the heat of the calidarium or hot water pool. The thermal baths of Pompeii are one of the best-preserved buildings of the ruined city and definitely worth visiting on your Pompeii tour. 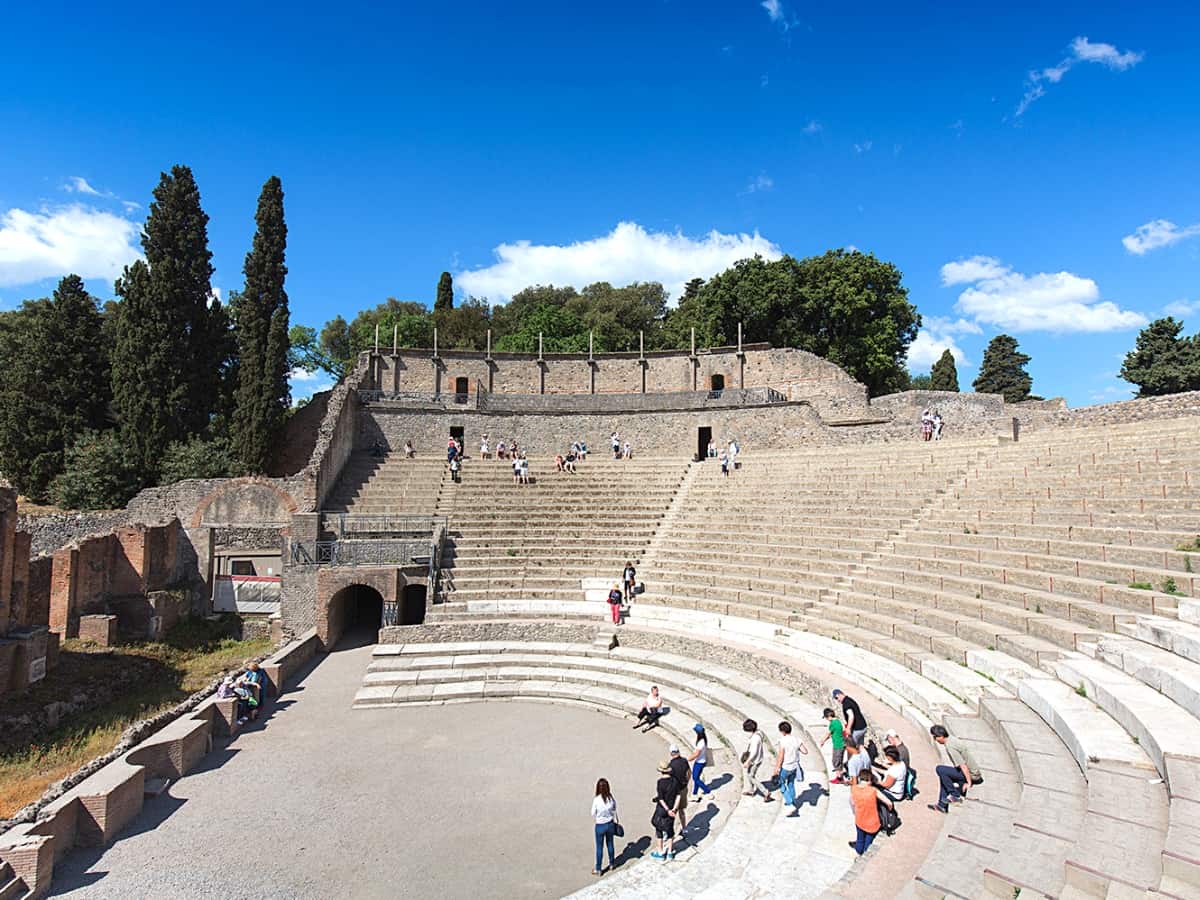 Cleverly built into the sloping ground, the tiered Teatro Grande or Large Theater, is one of the first stops on your expedition of Pompeii. Theatrical performances were a popular source of entertainment for the people of Pompeii. This open-air theater sat around 5,000 spectators and is a must-visit on your tour of Pompeii.

Top tip: be sure to climb to the top row of seats for impressive panoramas of this fascinating ruined city.

Beside the Teatro Grande is the more intimate Small Theater or Odeon. This well-preserved arena was dedicated to hosting performances of the most popular theatrical genre at the time, miming. It could seat 1,000 people and was decorated with a wealth of multi-colored marble, some of which is still visible today. 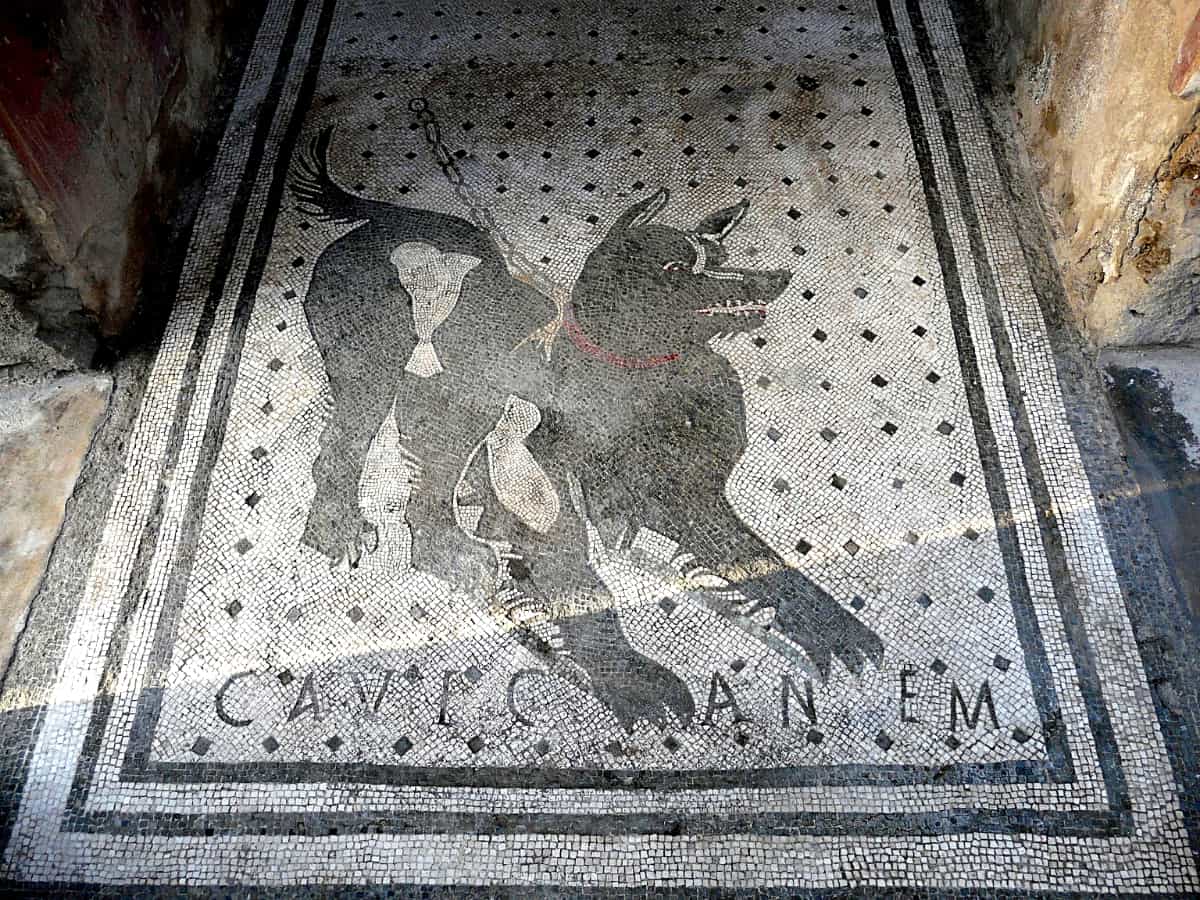 No tour of Pompeii is complete without stopping by the House of the Tragic Poet. It’s here that you will find the remarkable ‘Cave Canem’ mosaic. This perfectly restored mosaic depicts the image of a large black dog along side the description ‘Cave Canem’ which is Latin for ‘Beware of the Dog’. This mosaic is fascinating insight into the advanced civilization living in Pompeii during the time of the eruption, which was not so different from the societies we live in today. 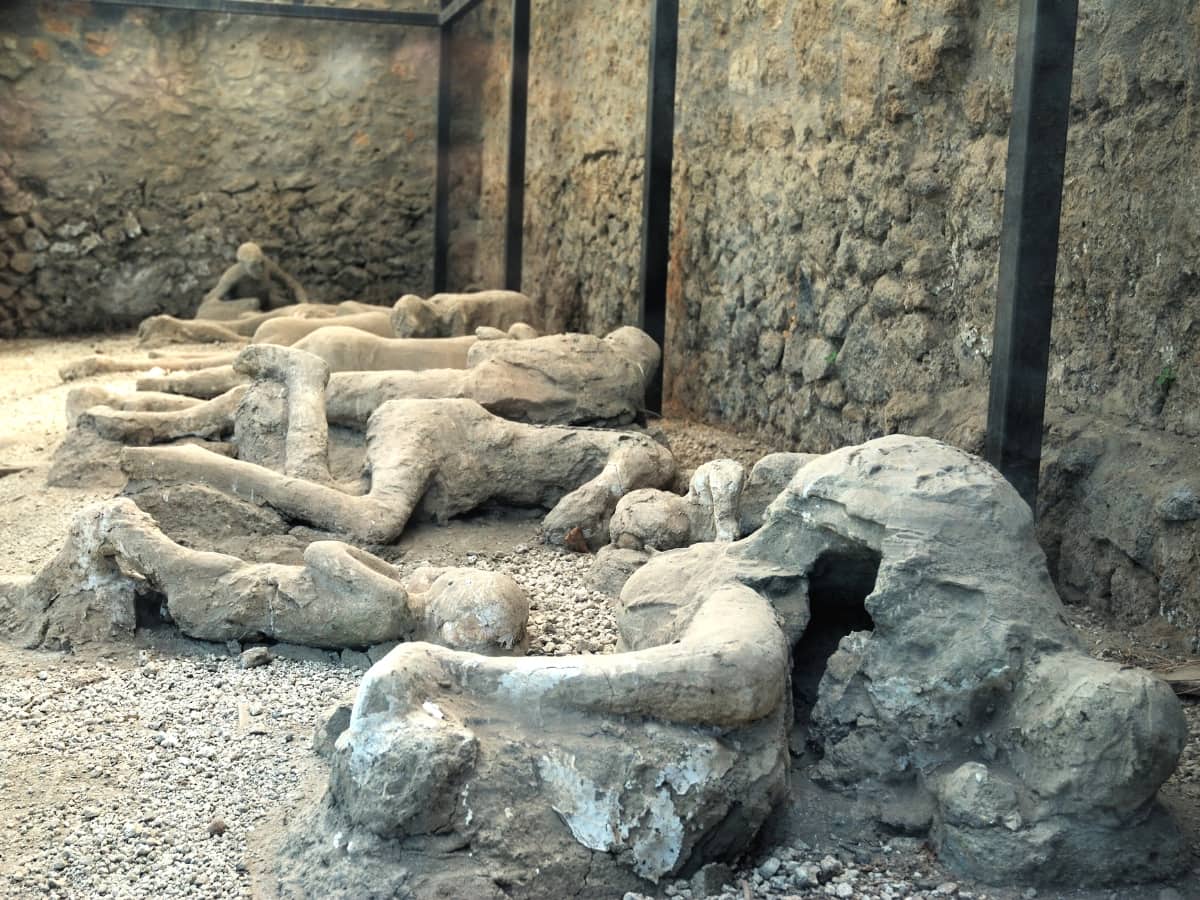 Not for the faint-hearted, the Garden of Fugitives offers visitors a devastating view of the scenes that unfolded following the eruption of Mount Vesuvius in 79 A.D. Here you’ll find the casts of thirteen victims who were killed as they attempted to outrun the clouds of ash descending from the menacing mound. Among the victims are the casts of small children, a sobering reminder of the horror the people of Pompeii faced that October day in 79 A.D. 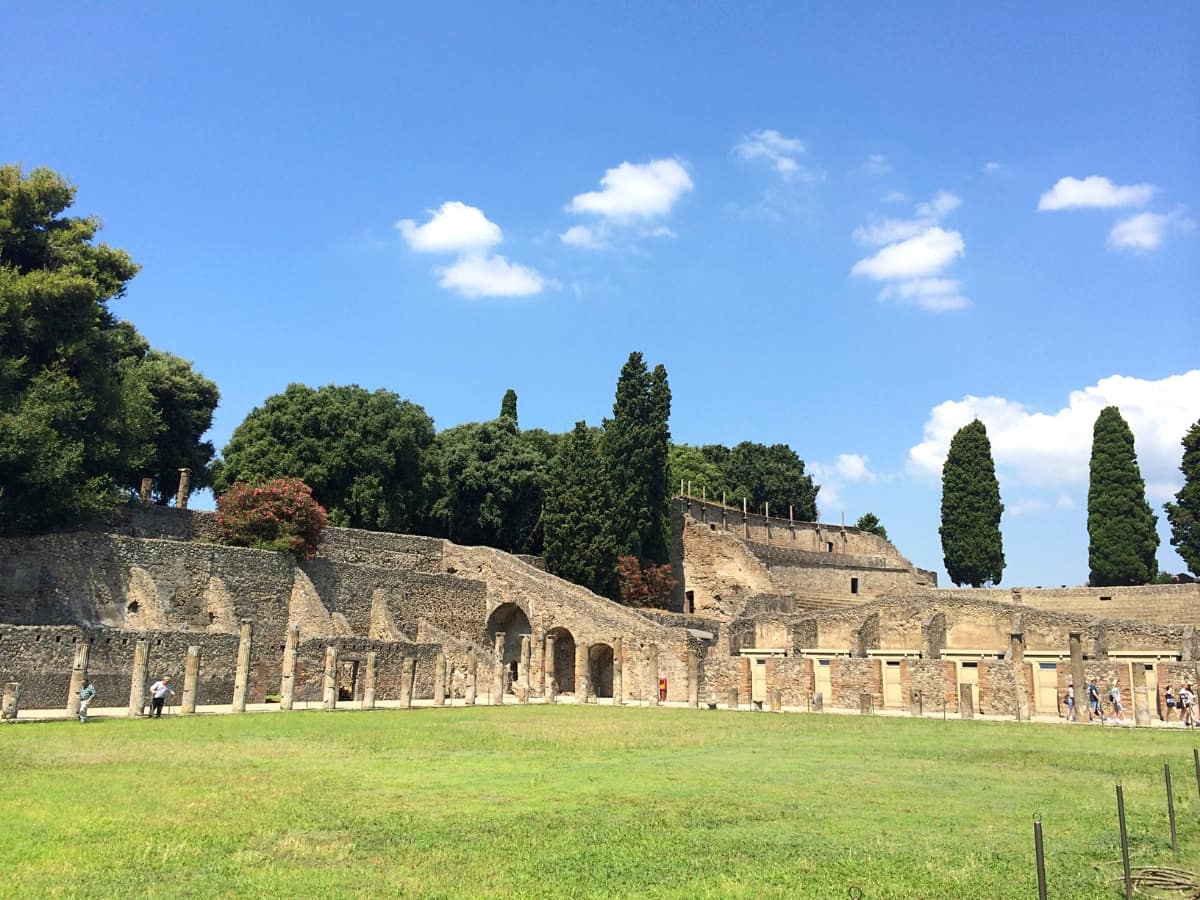 Since reopening its doors to tourists in January 2019, The Schola Armaturarum or Gladiators Schools is become a popular site to visit in Pompeii. This center was once a training ground for Pompeii’s most fearless gladiators. The site was closed in 2010 after the building began to collapse but reopened earlier this year following a three-year restoration project. Over 100 gladiator schools were in operation across the Roman Empire but today there is just three remaining; one in Rome, one in Austria and this one in Pompeii.

These are just some of the incredible sights waiting for you to explore on your Pompeii day trip. Enjoy a hassle-free day trip to Pompeii from Rome or Naples with round-trip transportation and an expert, English-speaking guide on one of our top-rated Pompeii experiences.

Unmissable Sights to See at the Vatican 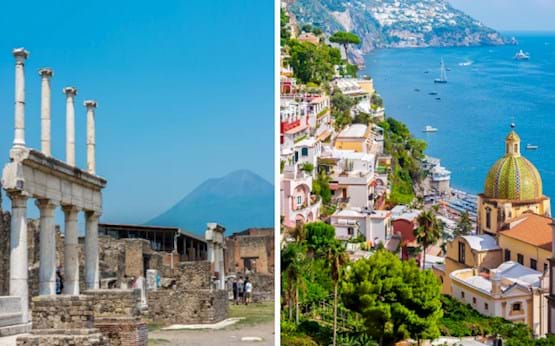