The Must-See Piazzas of Rome

If you’re doing it right you’re likely to spend a big chunk of your Italy holiday, especially in Rome, outdoors. A lot of this will be exploring ruins like the Colosseum and the Roman Forum but you should try to spend some time just wandering too. Italy’s cities are fantastic spots for people watching (which ones are the tourists? Will that fighting couple kiss and make up? Who owns that baby? And that old man and woman over there, are they married or have they been having a secret affair for the last 60 years?). So grab a coffee or ice cream to go or take your lunch al fresco on the edge of one of Rome’s piazzas and watch the world go by.

It may not have been finished during his lifetime but Piazza del Campidoglio is still one of Michelangelo’s masterpieces. If you’ve visited the Sistine Chapel and gazed upon David it’s easy to forget that Michelangelo was more than just a painter and sculptor – he was a scientist and town planner too. The square on top of Capitoline Hill presented him with one of his biggest challenges as a planner. It wasn’t square (in fact it wasn’t really any particular shape at all), the palaces weren’t symmetrical, and it faced towards the Roman Forum rather than towards his patrons in The Vatican. What he came up with remains one of the most interesting open spaces in Rome.
The three palaces on the hill were given new facades but even at that they were a trapezoid – the space was wider on one end than the other meaning the buildings didn’t face each other squarely or offer their planner any symmetrical shapes to work with. So he came up with an idea that would make the Campidoglio at least look symmetrical. He planned a busy twelve-star pattern that was raised slightly in the centre like an egg. It would play with space perceptions and the senses. The piazza would be turned to face the Vatican too. The Piazza del Campidoglio wasn’t completed until 1940 when Mussolini ordered the last paving stones to be laid.
Today the piazza is surrounded by the Capitoline museums and, as one of the seven hills of Rome, it offers one of the finest views of the city. Interested? Our Ancient Rome and Capitoline Museums tour visits Piazza del Campidoglio. 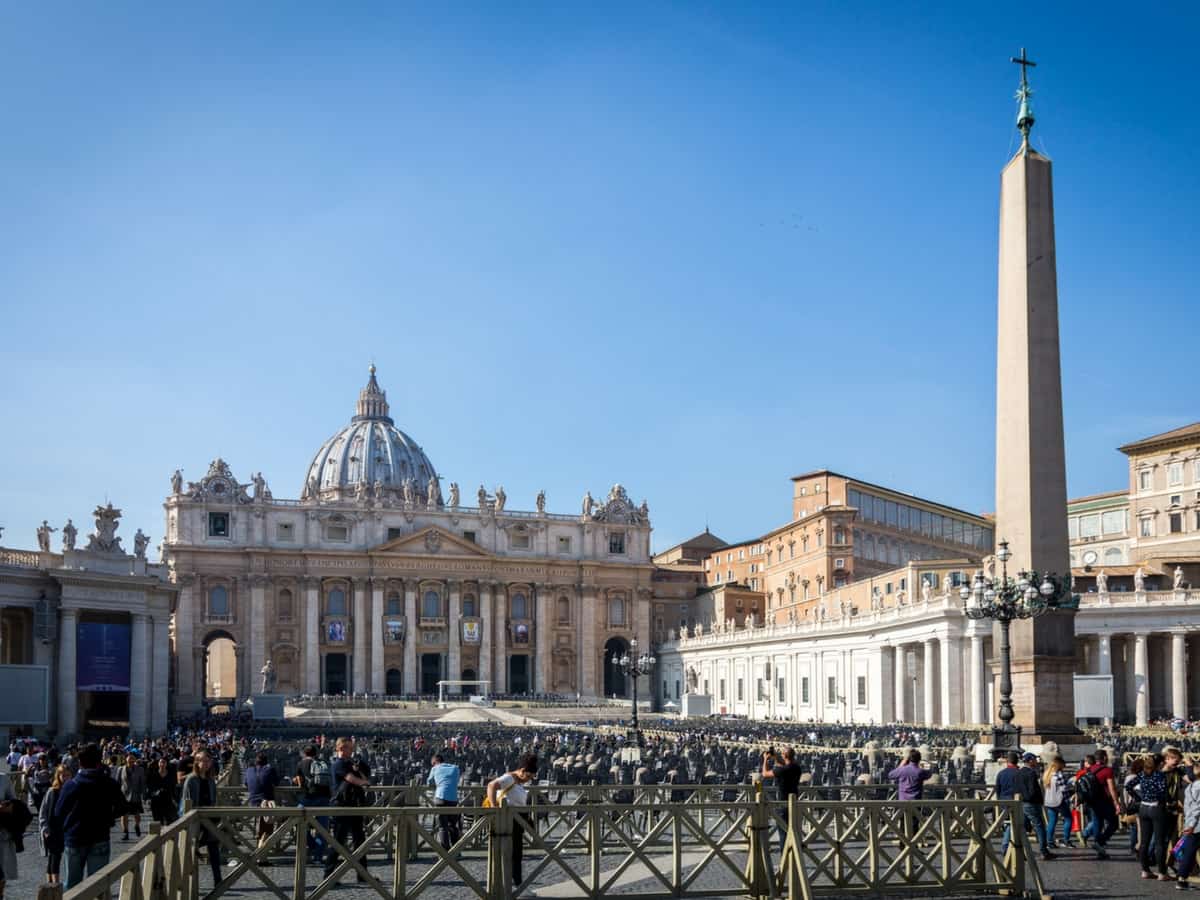 According to Lonely Planet, this is “one of the world’s great public spaces”. Technically it’s in the Vatican but this list would have been incomplete without Piazza San Pietro, St Peter’s Square. For most visitors this square will be their first view of The Vatican City, St. Peter’s Basilica is a circular space surrounded by 284 huge colonnades topped with 140 saints. The colonnades are four deep, running in two semi-circles, one on either side of the square. In the centre sits a 25m obelisk brought to Rome by Caligula.
This is where pilgrims flock for the Pope’s weekly audiences, where they watch all the church’s major events and it’s where they sit and wait for the smoke to signal the election of a new pope. This is a space that most visitors know long before they ever clap eyes on it. When Bernini planned the square he intended it as a welcoming spot. He hoped that pilgrims would stumble into the square, disorientated after a trip through Rome’s winding alleys, and find themselves standing in this huge square with the spectacular Basilica dome in front of them and colonnades all around them.
If you want to know more about St. Peter’s Square and Basilica, why not consider one of our skip the line access Vatican tours? 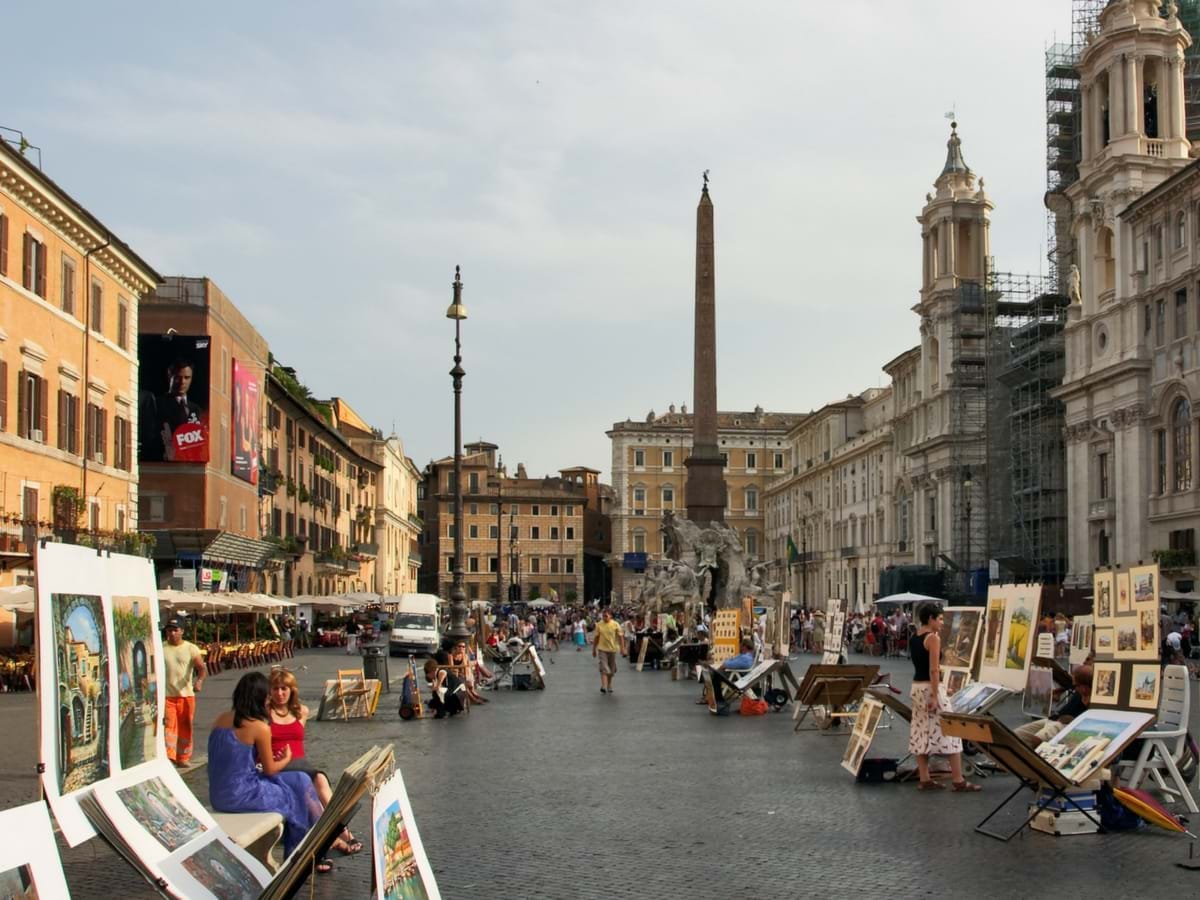 This is the public space of Rome, in fact the piazza as we know it today is built on the remains of an ancient Roman stadium that was used to host games. In the early 15th century people used to come for their vegetables as the area was a market place before it was named a public piazza at the end of that century. Today the piazza is home to Palazzo Pamphili which was built in Baroque style of the 17th century for Pope Innocent X. It also has a number of monuments and three incredible fountains, including Bernini’s Fontana dei Quattro Fiumi, Fountain of the Four Rivers, which is one of the city’s best. Piazza Navona is a real hub with cafés surrounding it and hawkers pushing a brisk trade – a definite must in any Rome visit. 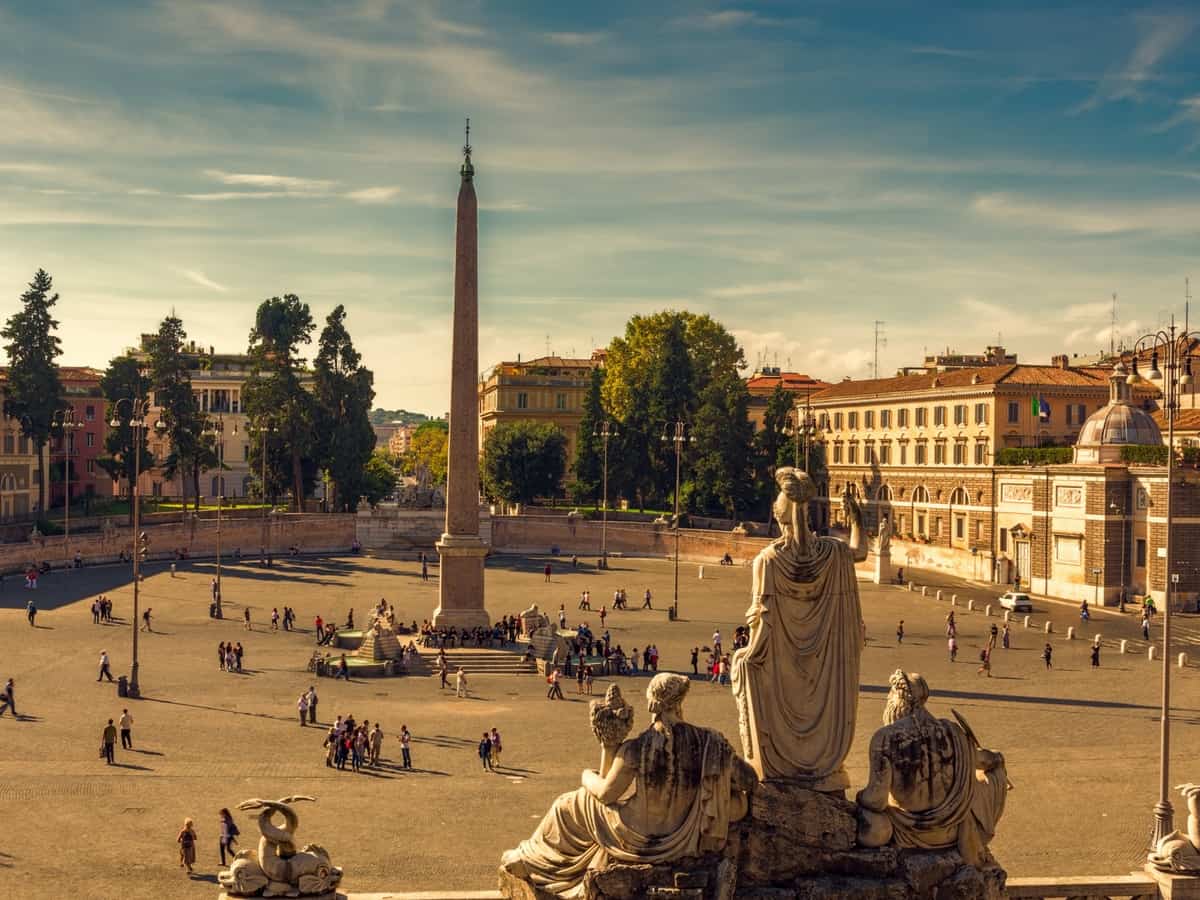 Most visitors come to Piazza del Popolo to see the twin churches of Chisea di Santa Maria dei Miracoli and Chisea di Santa Maria in Montesanto designed by Carlo Rainaldi in the 17th century. But remember, this is a space with a lot of history. It was once used for public executions!
Both Piazza del Popolo and Piazza Navona is visited on our Best of Rome Walking Tour. For more information see here. 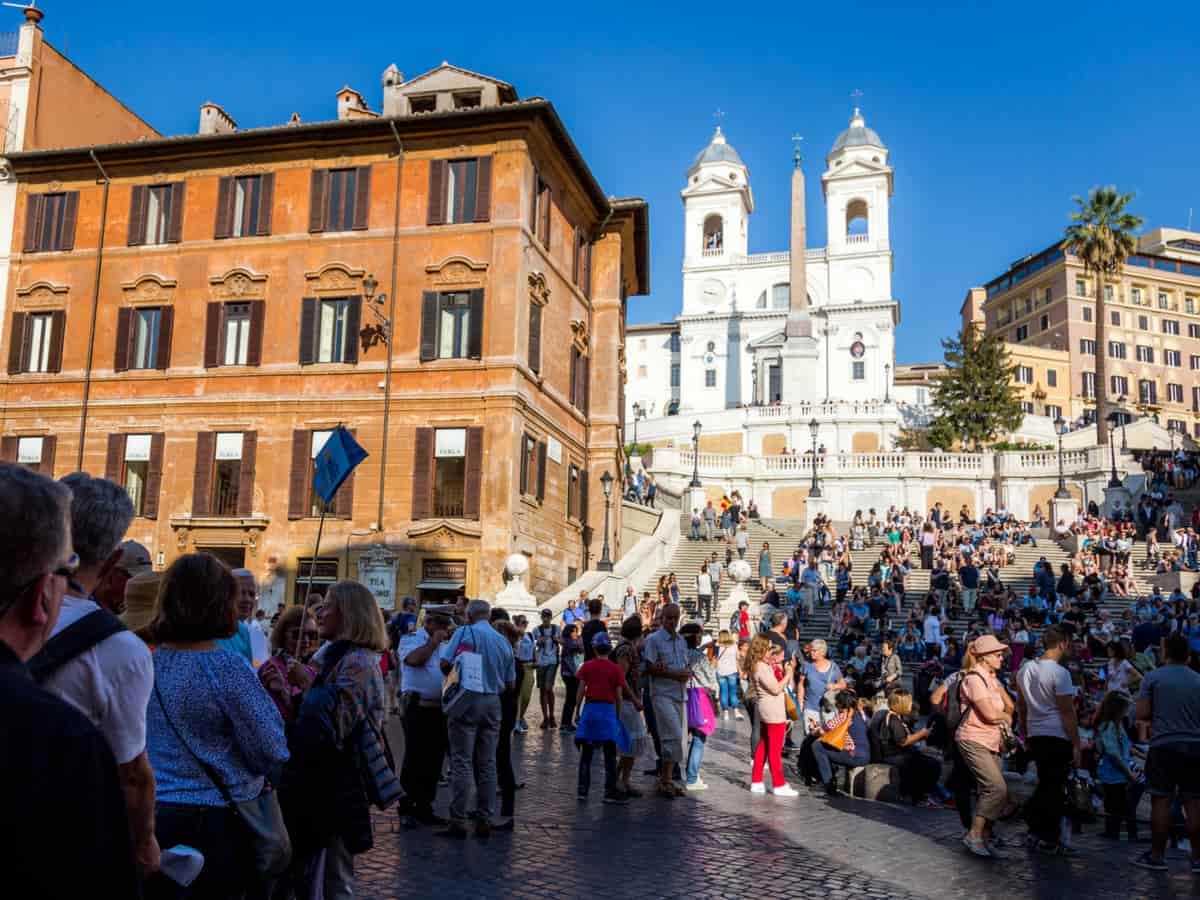 The Piazza di Spagna is completely different to most the other piazzas in the historical centre of Rome. It’s smaller, more closed in and hasn’t got a whole lot to do with religion. The square sits at the bottom of the lovely Spanish Steps and is home to the sinking boat fountain that is said to have been designed by Bernini. More than anything this is a place to relax. Have a seat on the Spanish Steps and watch the world go by – double points if you see anyone fall into the fountain! 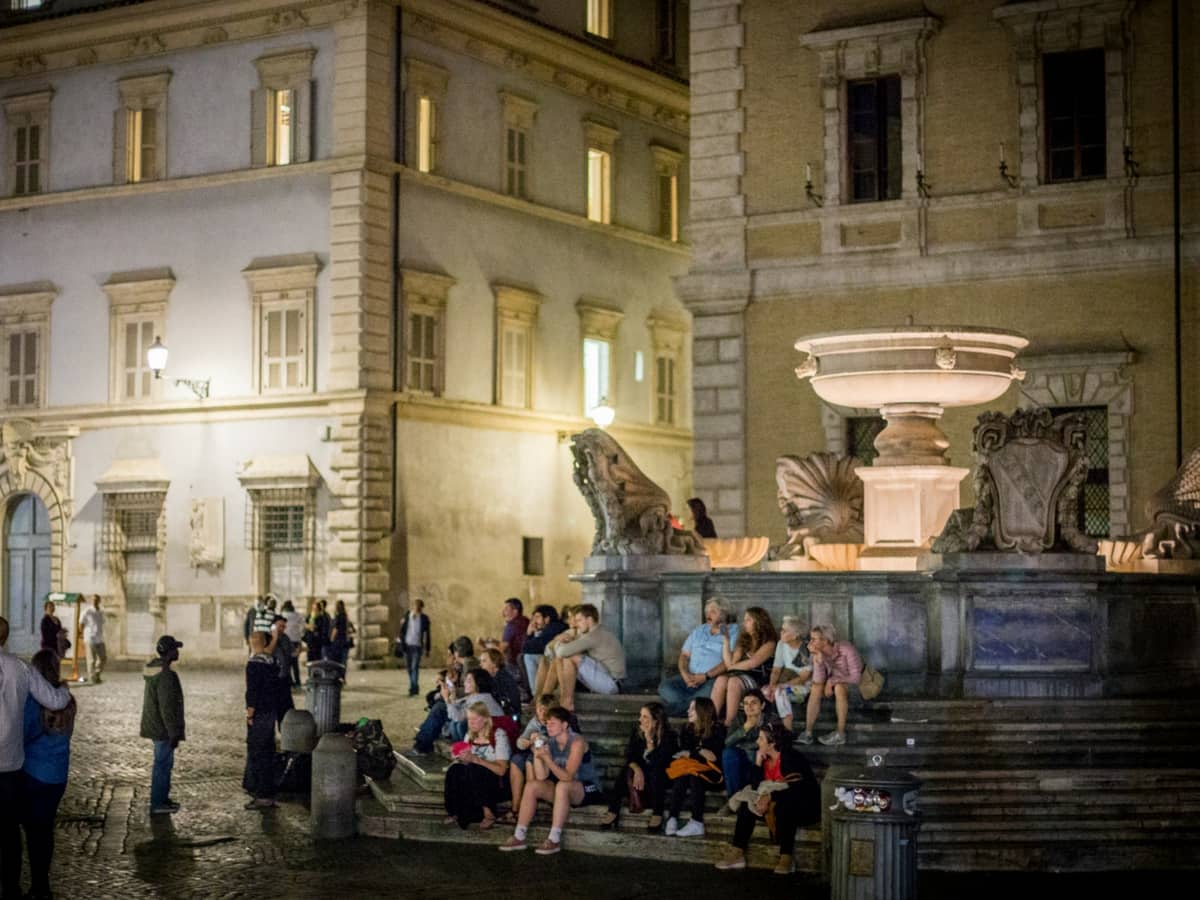 While it may not have the grandeur of Piazza San Pietro or the history of Piazza del Popolo, Piazza Santa Maria in Trastevere had to get a look into this list for a break from the centro storico of Rome which, to be honest, can get a little crazy in the throes of summer. Located on the other side of the river Trastevere is a different world. The domain of playing kids and flapping laundry, Trastevere feels like ‘Real Rome’ at its best. At its worst, it can be more like an expat colony. Piazza Santa Maria is a great people watching spot on lazy days. Take a seat at the restored ancient Roman fountain by the beautiful 12th-century Basilica di Santa Maria, grab an ice cream or gratachecca and contemplate the best local trattoria for lunch/dinner.

The truth about the Sistine Chapel