Despite the traffic, crowds and liberal concrete, London is surprisingly green. Some estimates suggest as much as 47 percent of Greater London is made up of green space. In addition, the city has more than eight million trees, which works out at around one tree for every resident.

With some 3,000 parks set within Greater London’s boundaries, there is certainly no shortage of green in this urban jungle. In fact, there is so much green space that choosing which park to visit may present a problem. Whether you’re on the hunt for a sweet summer’s day sunbathing spot, a grassy child-friendly hangout, a prime picnic locale or simply a refuge where you can relax around soul-soothing green and living, growing things, we can help in your search for the perfect park.

St. James’s Park: Perfect for a Scenic Picnic with the Family

St. James’s Park is one of London’s Royal Parks, a series of eight Crown-owned parks that the British monarchy have been kind enough to grant the public access to. Though it’s not the most expansive nor the grandest among the Royal Parks, St. James’s is undeniably lovely. Set across 57 immaculately manicured acres, this park features pretty lakes, carefully tended flowerbeds, sculptures, memorials, fountains and a footbridge, as well as a resident colony of pelicans who can be seen during their daily fish feeding.

Once you spread out a picnic rug here, you won’t be able to forget where you are, with some seriously iconic London landmarks, including Westminster, Buckingham Palace and the London Eye, all within sight. For anyone traveling with children, St. James’s has got the essentials: toilets, a playground, ducks that love to be fed bread, water fountains and a café, should the picnic plans go awry. And you can avoid what the British would refer to as a “numb bum,” by reclining in one of the park’s rentable deck chairs. 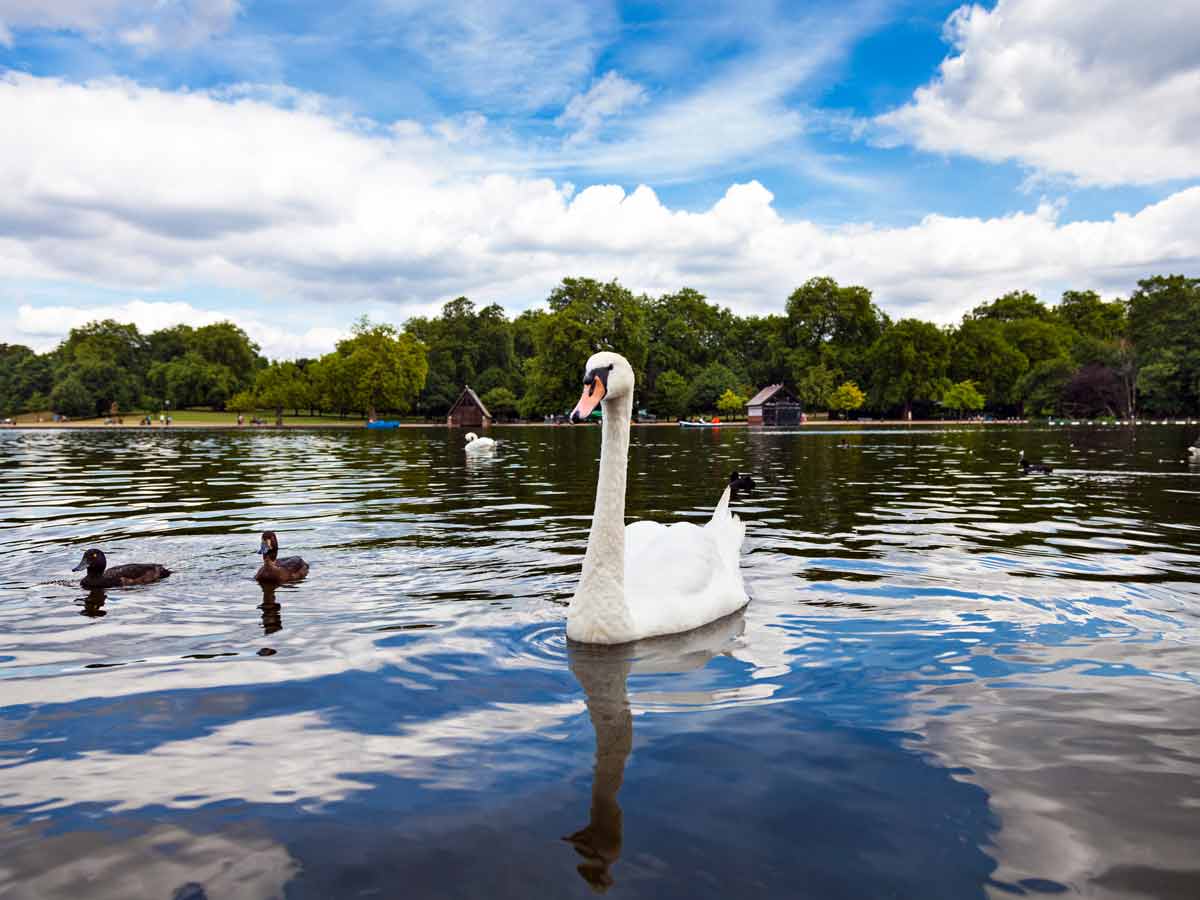 A Resident Swan on Patrol in Hyde Park

London’s most famous park, like all of London’s Royal Parks, started out life as a hunting ground for kings and their cohorts, and though it’s still officially owned by the monarchy, it is now heavily used by city dwellers and visitors alike. If you are looking for activities, Hyde Park has them in spades: you can go boating on Serpentine Lake, ride bikes or even horses around the park’s perimeter and watch the opinionated have their very public say at Speakers' Corner.

While Hyde Park is neat and groomed, Hampstead Heath is much more about natural in style. So much so that in certain parts of the 791-acre grassy park, you can almost fool yourself into thinking you’re not in London at all but out on a countryside ramble. It’s big enough that finding a secluded spot is never much of a challenge. Of course, some parts of the park, namely the open-air swimming ponds on the east and west side of the heath, and the summit of Parliament Hill, which affords views over London landmarks including the Gherkin and St. Paul’s dome, attract more park visitors than others.

Victoria Embankment Gardens: A Break from the Central London Crowds

This gorgeous little green space, hidden away between the Thames and the Strand in central London, rarely features on tourist agendas. In fact, it’s so well concealed that lots of resident Londoners know nothing of its existence. If you are sightseeing around Trafalgar Square or the Strand and find yourself in need of a sit-down, this fetching little park is ideal. It’s got a couple of picnic-perfect lawns, deckchairs, a bandstand that hosts events in the summer months, a scattering of statues and a 17th-century water gate that would have once provided access to the Thames, but – thanks to the changing water lines – now stands well back from the riverbank. On sunny days at lunchtime, it quickly fills with office workers hoping to get their fix of vitamin D and fresh air before returning to their screens.

With glass and steel office buildings including City Hall (HQ for London’s mayor) rising up around it, Potters Fields Park on the south bank of the River Thames, is not a place to escape the city but rather a place to revel in the urban environment. It’s not particularly big – don’t expect the expansive lawns of London’s Royal Parks – but it is a nice place for a picnic, with views across to the Tower of London. Time your visit just right and you may even get to witness Tower Bridge lifting, to the delight of visitors and the dismay of impatient commuters who are forced to wait while river traffic passes below.

Another former hunting ground for England’s royals until it threw open its doors to ordinary folk in 1811, Regent’s Park is one of London’s most-frequented green spaces. During summer, the park hosts a series of well-attended events, including food festivals and open-air theater. It’s also home to London Zoo, Regent’s Canal and Queen Mary’s Gardens, which is planted with some 12,000 roses. If you are staying in central London and want to get active, the relatively flat 3-mile-long road that hugs the outer edge of the park, is great for a bike ride or a jog.

This little-known gem in East London was one of London’s so-called “Magnificent Seven,” a group of large cemeteries built in the city during the 1830s and the 1840s to help alleviate overcrowding in church graveyards. This particular cemetery was opened in 1841 and was the final resting place for more hundreds of thousands of souls. As time went on, the cemetery fell out of use, and soon, headstones began toppling over and the grounds became overgrown with greenery. Fast-forward to the present-day and the atmospheric former cemetery is now a nature reserve, its crumbling gravestones shrouded with greenery, trees and wild flowers. A veritable sanctuary in an otherwise very busy part of town, Tower Hamlets Cemetery Park is one of the few places in London where a genuine sense of tranquility pervades.