No trip to London is complete without a visit to one of the city’s most famous monuments: the Tower of London. This historic castle, on the north bank of the River Thames, was founded at the end of 1066. Playing a prominent role in history ever since, the tower has done a bit of everything. It has been a treasury, a menagerie, a public record office, home of the Crown Jewels of England and so much more. And it is just waiting to be discovered!

In just 2.5 hours, your expert, English-speaking tour guide will take you from the main entrance throughout the Tower and its constituent buildings. After an inspiring introduction to the Tower’s colorful history, you’ll head on in. Admire Tower Green and the spot where Henry VIII beheaded both Anne Boleyn and Catherine Howard, and see the White Tower too - a medieval keep. The site just oozes history and stories, and your guide will be on hand to tell you everything you need to know.

You can explore the Royal Armouries, see the Tower ravens and, of course, get the chance to marvel at the Crown Jewels. They have been held here for the past 600 years and include orbs, crowns, rings and swords used during noble appearances such as coronation ceremonies and more.

The biggest perk of having a private tour guide dedicated to your group is that you’ll have the chance to ask questions, and tailor the tour to spend the most time at the parts you are most excited to see at the Tower of London.

5.00
2 Reviews
Excellent2
Great0
Average0
Poor0
Bad0
View Reviews
From
US$295.69
Price per adult based on a group of 2 people. Price per adult decreases as more people are added. 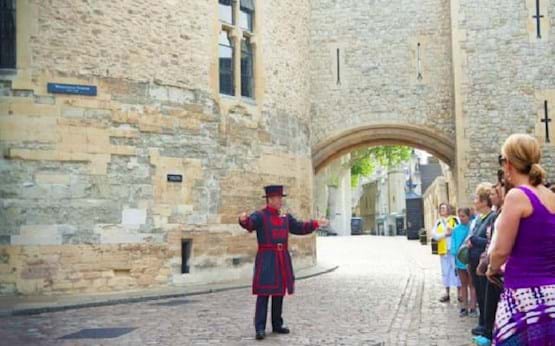 At times an important stronghold, a magnificent palace, and an intimidating prison; the Tower of London has a rich history intertwined with the English monarchy. Explore this famous attraction and get exclusive access to a Beefeater on our Tower of London tour.