Arguably one of the most recognizable works of art on the planet, Michelangelo’s David, which lives within the Galleria Dell’Accademia in Florence, still holds a few little secrets the World doesn’t know about. We’ve put together a short listicle with some of our favorite lesser known facts about David….

1) David is a one-piece marble wonder

Before Michelangelo set to work on it, the block of marble that became David was rejected by two previous artists, Agostino di Duccio and Antonio Rossellino, both had a go and decided it was too difficult to work with. It waited 42 years for Michelangelo to find it and create his masterpiece. 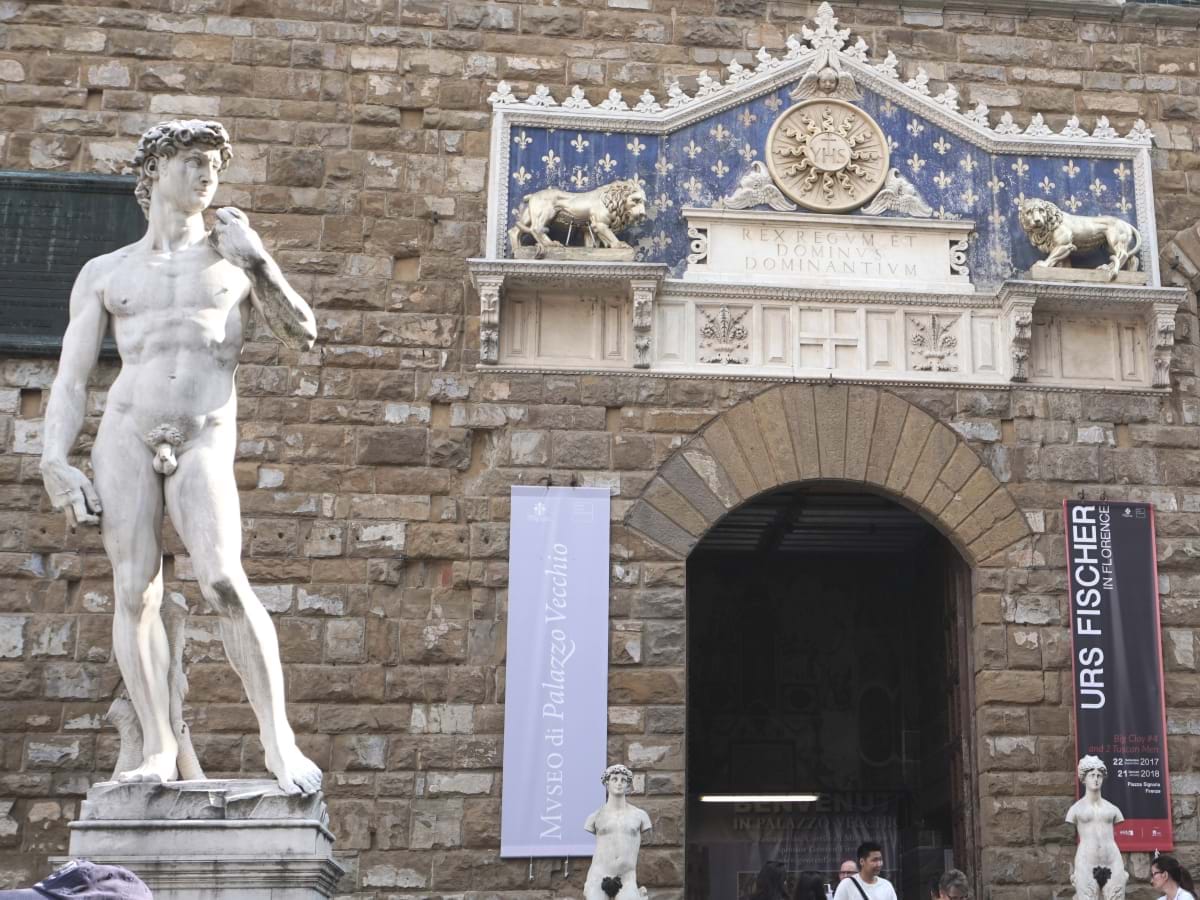 The replica of Michelangelo’s Statue of David outside the Palazzo Vecchio In Piazza Della Signoria in Florence.

2) Being Political: David was a symbol of the Florentine Republic

In a time of massive political change, David became a symbol of the Florentine Republic’s strength. Much like David facing Goliath, the Republic was threatened by stronger states on all sides, not to mention the Medici Family regaining power. When David was placed outside the city government buildings in the Piazza della Signoria this connection solidified itself in the public’s mind.

It has taken us 500 years to uncover one of Michelangelo’s biggest secrets: David has a squint. Those eyes gazing towards Rome were created through a trick of perspective, in reality Michelangelo intentionally gave his masterpiece a disability. David has been held up for centuries as the ultimate in physical male beauty, so we’re sure all the men out there would be happy to hear that he isn’t in fact perfect. It’s theorized that Michelangelo didn’t believe he measured up to the Roman Masters who he drew so much inspiration from, and so specifically left a flaw in his own masterpiece. 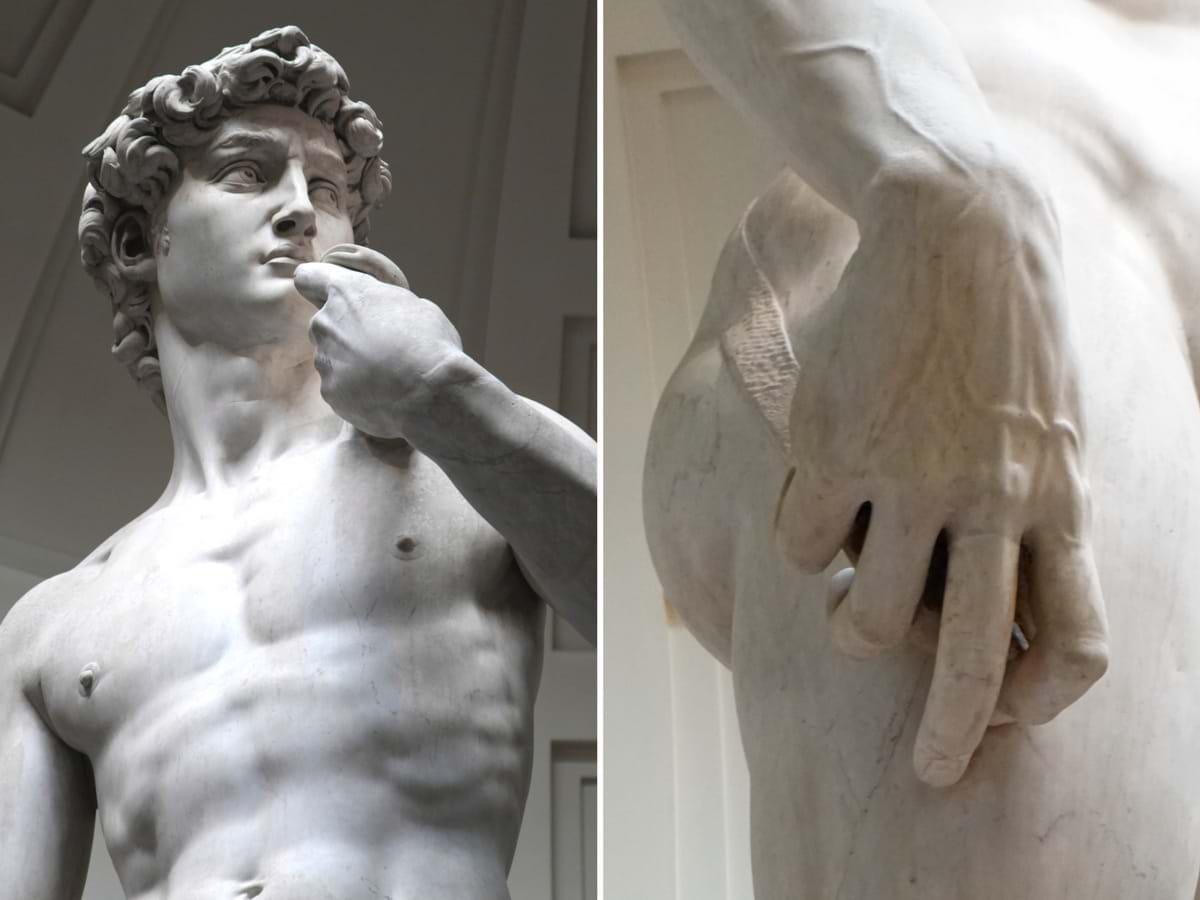 L: Close up of David’s face: it’s hard to see his squint but that’s the point. R: David’s disproportionate hands with incredible detail.

Another little quirk of David is his out of proportion head and hands. There are different explanations which could explain it, perhaps a nod to David’s nickname, Manu Fortis (Strong Hand), or because he knew the statue would be viewed from below and needed a little perspective. It could also have been Michelangelo’s creative license of a growing boy’s lanky limbs.

Being so political can have its downfall, as David well knows. He was on the receiving end of angry protesters twice during his early days in the Piazza della Signoria. The first time he was attacked with stones and the second time the protestors successfully broke his arm in 3 places. 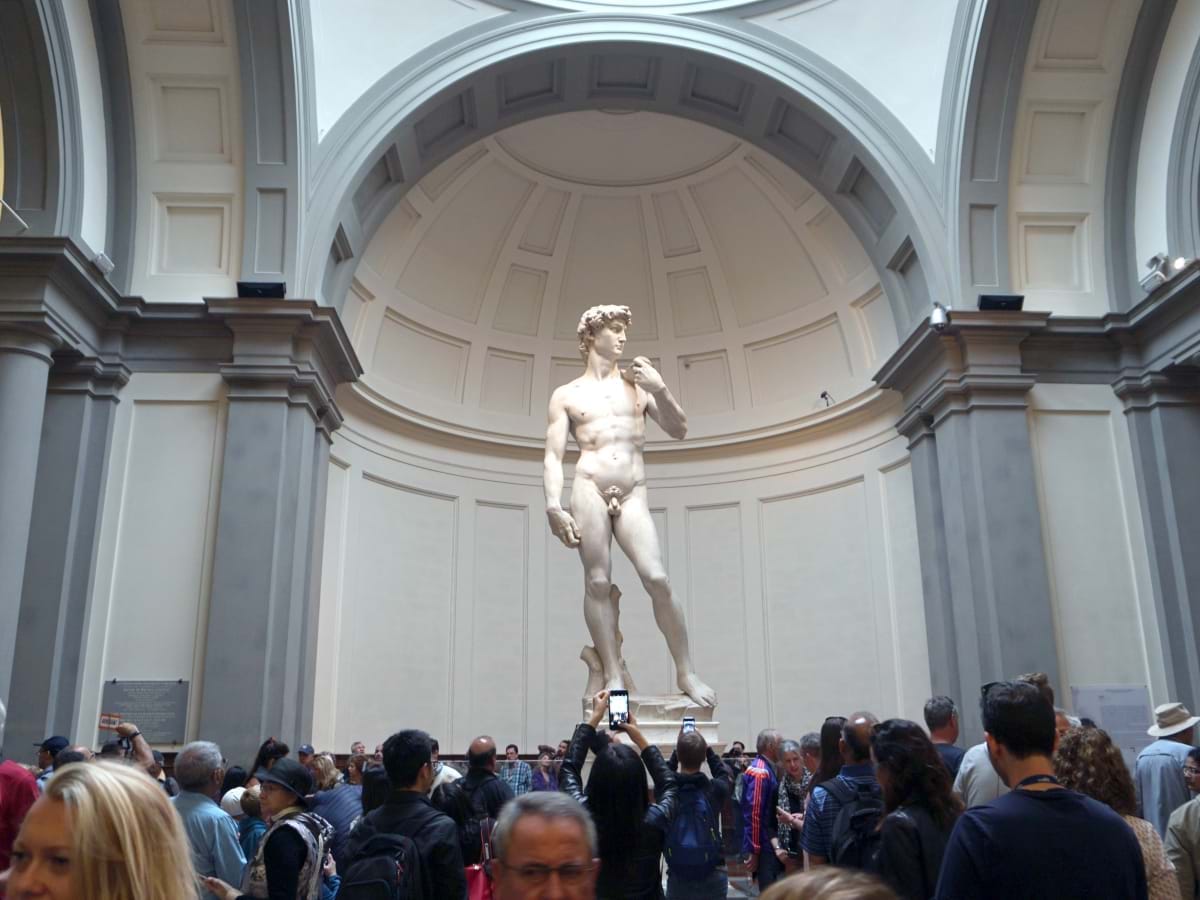 The Statue of David surrounded by his adoring fans. Approximately 1, 252 508 people visit David each year.

5) One David, hundreds of replicas

There is more than one David: in Florence alone, there are two replicas of David, but around the world there are at least 30 full size replicas of the statue. Not to mention the hundreds or kitsch smaller versions that were produced for popular art statements or for the tourism industry.

In 1857, the Grand Duke of Tuscany sent all the gentleladies a blushing when he gifted a replica of David to Queen Victoria. The Queen found David’s naked form so scandalous that a fig leaf was created to preserve David’s modesty. The Fig leaf could be attached and removed easily enough so that whenever the Queen Visited David, he could be appropriately covered. Needless to say, the fig leaf has developed its own following and is occasionally requested on loan by art lovers and museums alike.

7) The question of ownership

Who does David Belong to? Is it the City of Florence or the Nation of Italy? In 2010 a fight broke out between the Italian Government and the City of Florence over the statue’s ownership. The city of Florence had the greater claim as it had paid for the statue 500 years earlier and that it was made for Florence. While the Italian Government argued that it had funded the statues move to the Galleria Dell’Accademia – a state owned Museum- and also paid for its conservation for over 150 years. The issue is not yet resolved so we live in ambiguity on this one.

The Tree Trunk Behind David’s leg isn’t there to set the scene, It’s actually important to the massive statues structural integrity. Chiseling too much at the marble would cause too much stress to the block and potentially cause it to shatter. So, the tree truck was left to prevent this happening. It is a common trick used in sculpture and you’ll notice it on most statues. 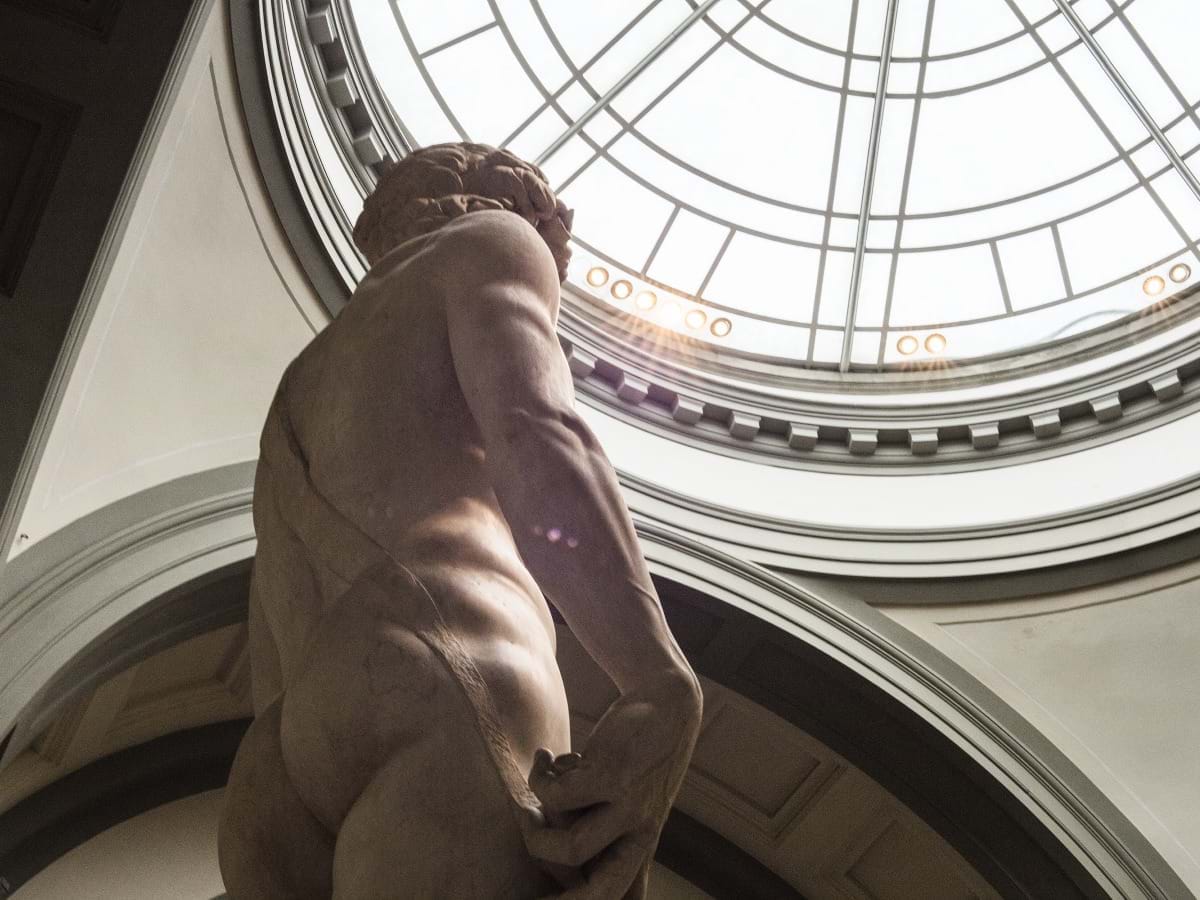 The Statue of David bathed in natural light from the glass dome in the Galleria Dell’Academia.

9) David was once adorned in gold

David wasn’t always completely in the nude, in the beginning parts of the statue were adorned in gold leaf. The tree and his sling in particular were gold and he also had a gold garland that draped over his hips that protected his modesty. They probably could have added something similar when they presented a nude statue of the perfect man before the Queen of England!

10) David had a few brushes with vandals

Two of Michelangelo’s most famous sculptures have been brutality vandalized. David was assaulted by a chisel wielding vandal in 1991, the man hammered off part of a toe on his left foot. While in 1972 a geologist, Laszlo Toth, broke through the guard rail in St Peter’s Basilica and broke off the Madonnas nose, forearm, part of her veil and eyelid. Apparently during the attack only a handful of witnesses tried to defend the statue by jumping on Toth, while others grabbed pieces of the broken Virgin and fled the scene. It took a particularly damning address from Pope Paul VI to those that stole pieces to send them back and a further 5 months to puzzle pieces as small as a finger nail back together.
The silver lining of it all? The restorers discovered an “M” carved into Mary’s left hand.

Undoubtedly you’ll get a load more interesting facts about David from the excellent tour guide on your Half day best of Florence highlights tour with David and the Duomo. But it never hurts to get yourself excited beforehand!

Things to Do in Rome in Winter 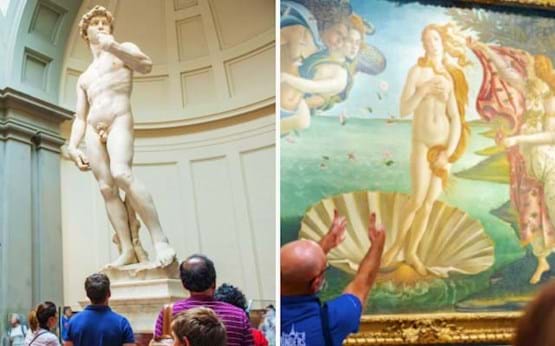 Get Skip-the-Line Access to the Uffizi Gallery and Accademia (home to Michelangelo’s David), and learn about the city on this half-day tour. You’ll enjoy Florence's sights and attractions with a guide and crafted itinerary.