Rome is a treasure trove of ground breaking and history altering art works. Heck the entire city is an artwork in so many ways. So, it is a wonder that you can walk into almost any public space and find an awe-inspiring piece of art. Welcome to the Caravaggio installment in our art treasure hunt.

You don’t have to be an art fan to be affected by Caravaggio’s work, undoubtedly, you’ll find his work more approachable than other pieces of this era. In a time where paintings were used to elevate religion above the realities of the world and create the metaphorical pedestal for religious icons to gaze down on us regular folk, Caravaggio’s depictions were the exact opposite. He made the most celebrated figures in Christendom mere mortals.

To begin, for the first timers out there, Caravaggio is one of the biggest names in art history. He is credited as the father of the baroque style of painting and the leader of a movement turning away from mannerism and romanticism. His paintings were direct, they didn’t filter the world but rather invited the viewer to participate in a scene that they could genuinely empathize with. Biblical figures were depicted as regular people, while Caravaggio’s use of light and dark symbolically showed the religious implications or journeys that his subject may or may not be about to embark upon. His work was both adored and detested by those of a religious mentality, adding further to his undeniable artistic charisma.

An introduction to Caravaggio (L-R): The Grooms' Madonna; David with the head of Goliath; Caravaggio himself on the Italian Lire; John the Baptist (John in the Wilderness);

Now assuming you are doing all the large, well-known art galleries such as the Borghese Gallery and the Vatican Museums, we’ve made the editorial decision to leave these locations out and move straight on the hopping around Rome to find his works that are still living in the locations they were commissioned to adorn- Caravaggio in situ. And as a bonus, they are all free to see!

Your treasure hunt begins in the Piazza del Popolo at the Santa Maria del Popolo church. Originally build to ward off the ghost of Emperor Nero, the Minor basilica of Santa Maria del Popolo is basically a museum, every day regular parishioners sit in the presence of works by some of the biggest artists in history, from Caravaggio and Raphael to Bernini and Bramante.

As you walk into the Cerasi Chapel, you’ll find your first two pieces of treasure. Framing the Assumption by Annibale Carracci are two of the most famous Caravaggio’s: The Conversion of Saint Paul and The Crucifixion of Saint Peter. Painted in 1601 these two paintings were commissioned specifically for the Cerasi Chapel and have remained in situ since. The Caravaggio’s were painted to be viewed from a sideways angle to draw the attention to Carracci’s Assumption and the lighting within the chapel was designed to enhance that dramatic use of light and dark that Caravaggio became so famous for; so, when you’re standing face to face with the magnificent works of art do take the time to view the entire chapel. This way you’ll see how Caravaggio’s use of light and perspective allow you to view the paintings even from the most extreme angle.

Then head down towards Piazza Navona to the church of Sant’ Agostino. This low-key Renaissance church holds more than just one incredible gem. This nonchalant church is home to a Raphael Fresco and a Sansovino statue, but more famously it houses The Madonna di Loreto also known as The Madonna dei Pellegrini. Caravaggio’s depiction of the Madonna in this painting adds to the list of scandals Caravaggio caused with both his paintings and his lifestyle; in this case it was about how Mary could live in such modest home and see pilgrims with such terribly dirty feet. 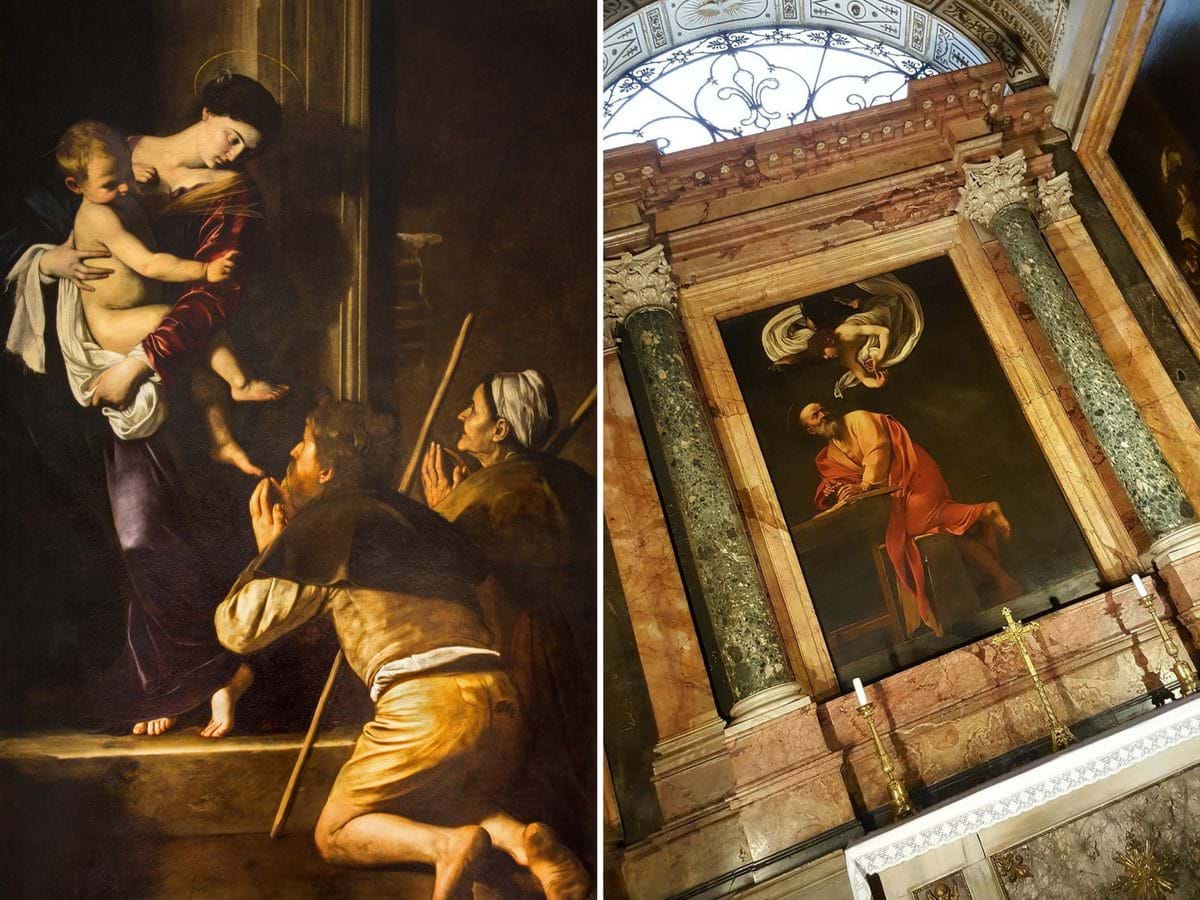 L-R: Madonna di Loreto and The Inspiration of Saint Matthew

Finally, you’ll get to the trifecta of Caravaggio at the San Luigi dei Francesi where you’ll be treated to three Caravaggio pieces in The Mathew Cycle. Caravaggio was commissioned to create the paintings for the Contarelli Family Chapel on the left-hand side of the church, it was his first major public commission. He provided the chapel with three canvases: Over the alter is The Inspiration of Saint Matthew, on the left is The Calling of Saint Matthew and on the right, is The Martyrdom of Saint Matthew.

These three pieces are a testament to Caravaggio’s ability to recreate biblical scenes in a realistic and approachable manner without insulting the powers that be- at the time. Matthew seems to be a normal kind of guy, never have we seen a saint surprised by the appearance of an angel, but who wouldn’t be? When Jesus points to Matthew in The Calling of Saint Matthew, we think most of us would question who he was talking to, just like Caravaggio’s depiction of this notable Saint. However back in the 1600’s this kind of blatant personification of a canonized Saint was almost scandalous.

Robert Hughes, an art critic for Time Magazine stated that “There was art before him and after him and they were not the same.” Caravaggio’s impact on art history and continued influence in contemporary society are testament to his talent. A Caravaggio treasure hunt is right up there on our list of things to see and do in Rome especially if you’re on a budget.