Discover the Art, History and Secrets of Doge's Palace

Built in 810, this palace was initially a wooden construction, but that quickly changed after the first few iterations were burnt in a fire. Thankfully this wasn't an absolute travesty as they were horrendous renditions and we wouldn't have what we do today without it. During the 12th and 13th centuries, the city of Venice grew at a rapid rate, this led to the requirement for a larger government to operate. As the city grew, so did the palace requirements and thus, the construction of a new palace began (1340). Although it was named a palace, the Doge wasn’t a king but a governmental representative. Unlike most palaces, Doge’s Palace was not only the home of the elected ruler, but also to government offices, the secret police and many high caliber prisoners. Thankfully, the new palace is a beautiful Byzantine design with a pink marble façade, delicate white pillars and intricate trellis roof detailing. The following is a list of the top 10 must see areas within Doge’s Palace. 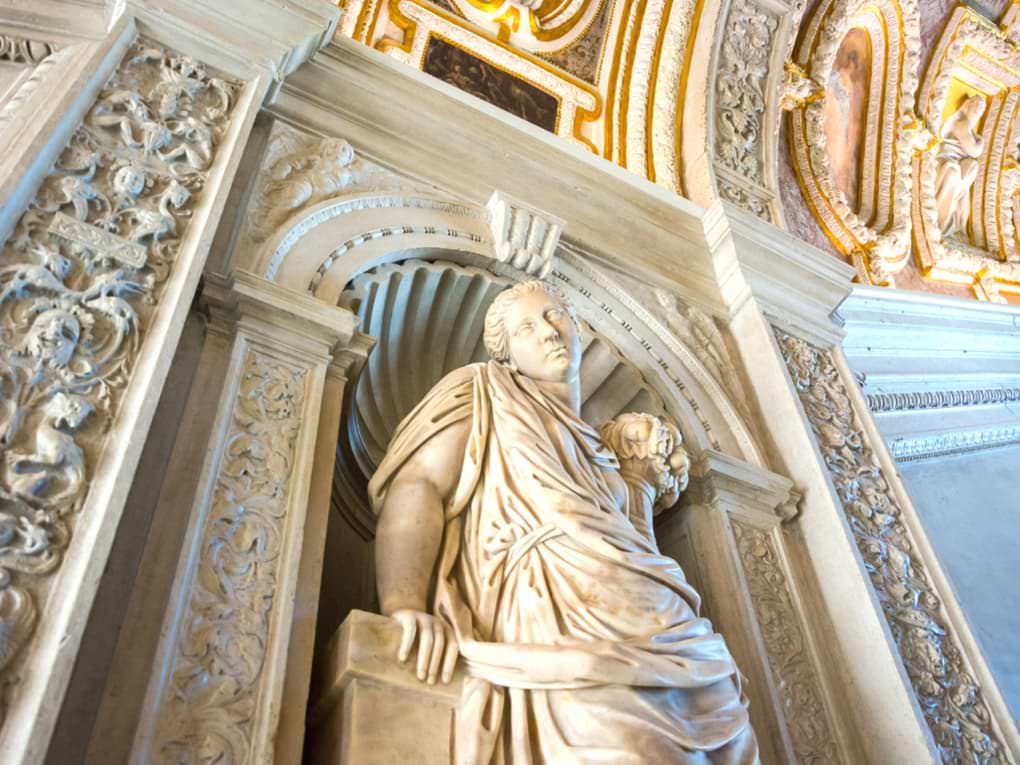 Why Opt for a Guided Tour?

If you were to opt for general admission on arrival, not only would you be waiting in line for a long time, but you would also miss out on many spectacular parts of the palace only open to guided tours. Taking advantage of an all-inclusive tour such as the “Saint Mark’s Basilica and Doge’s Palace Tour” would give you special access to areas you wouldn't be able to see otherwise, including; The Chamber of Council, Casanova’s old prison cell, apartments of the Doge, the Bridge of Sighs and more. 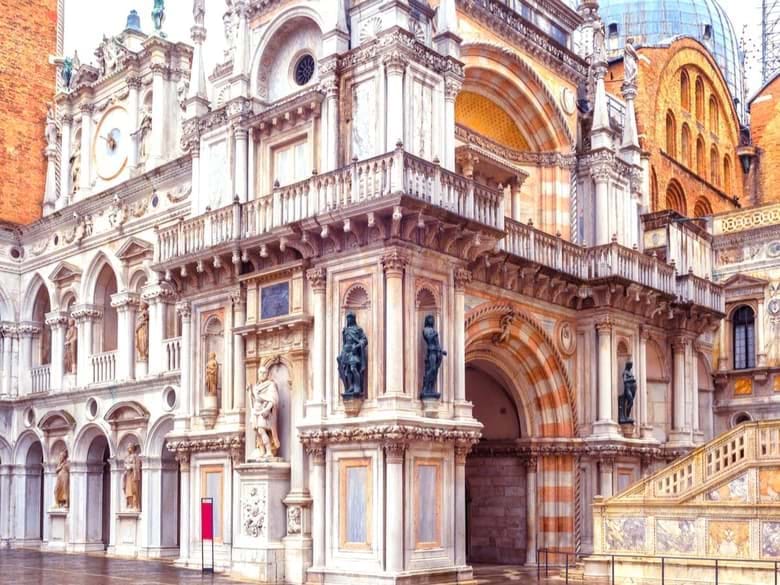 The masterpiece of Doge’s palace takes its unique appearance from Gothic influence. The building is designed in a unique way that makes it appear top heavy. The weight of the top deck is placed upon delicate white marble columns. The top deck itself is decorated in geometric patterns using a pink Verona marble and mosaic style design. Along the upper deck are a series of beautifully curved window frames which light up at night and reflect off the marble in a dazzling effect. The standout pieces on the exterior are four sculptures designed to symbolize; Fortitude, Hope, Prudence and Charity. When viewing the façade from the Piazetta, you will see two red columns, This was the area where heads of government would stand as they proclaim death sentences and observe executions in the Piazetta. 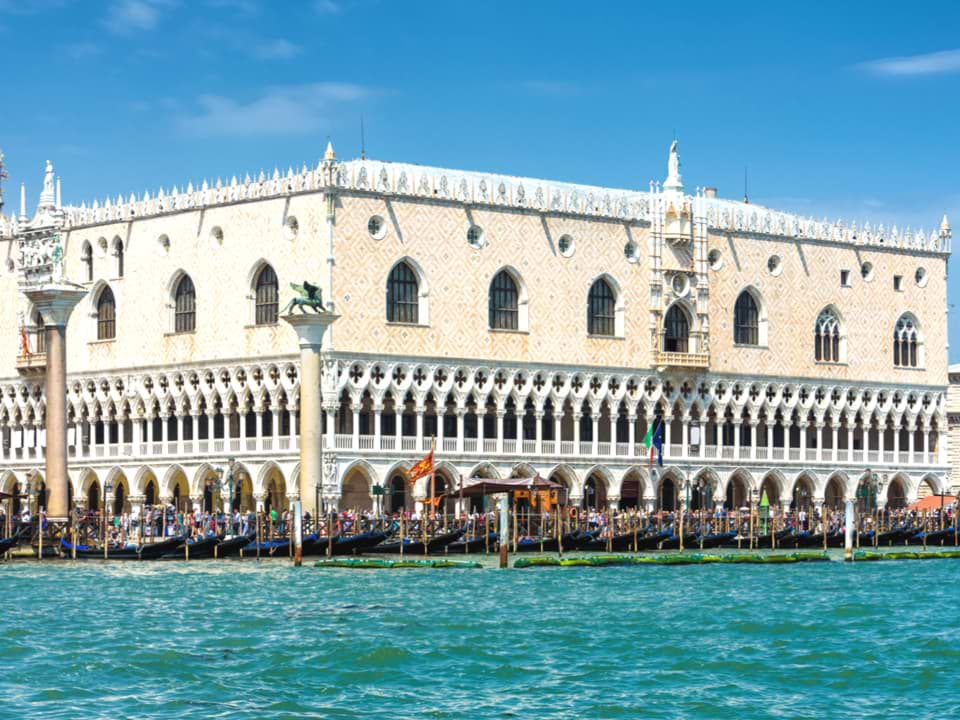 This is the palaces main entrance facing St. Marks basilica, designed and created by the Bon brothers during the 1400’s. Decorating the arch are numerous intricate figures, above which is a large sculpture of Doge Francesco Foscari, kneeling before the Lion of St. Mark. This is meant to symbolise how the Venetian republic bowed to the power of the state. “Porta Della Carta” or paper gate is named so because people would sit underneath the gate, waiting for council members to enter as they handed petitions to them. Another noteworthy feature of this gate is the stump that lies beside it. This was originally used as a podium for proclaiming laws of the republic. 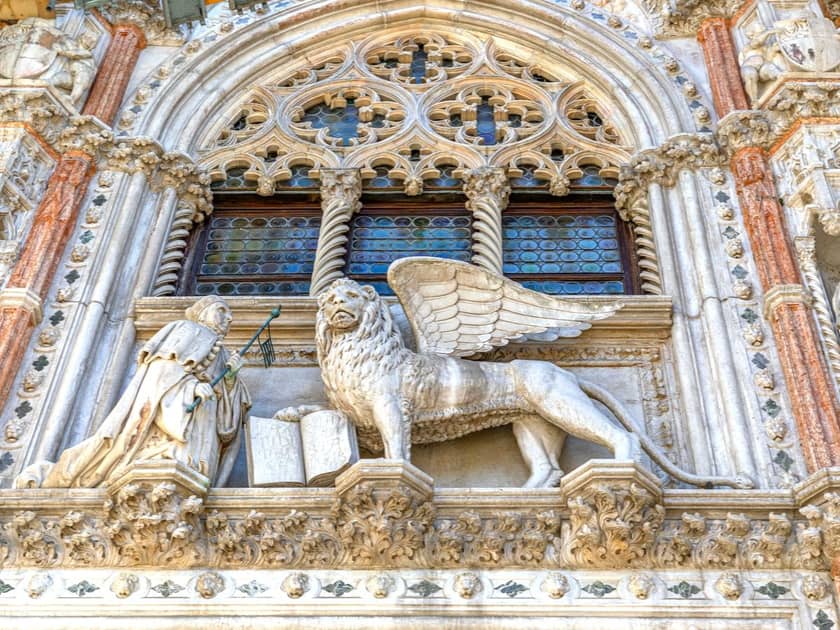 The “Porta della Carta” or main entrance leads directly into the “Scala dei Giganti” or giant’s steps through the “Foscari Arch”. This arched entrance is a mix of Gothic and renaissance design, comprised of columns, sculptures and intricate design features. Both the arch and staircase were designed by Antonio Rizzo during the late 15th century. The most notable features of the arch are the statues of Adam and Eve, sitting facing the stairs. The stairs themselves lead up to the state apartments, situated on the first floor. It was also at the top of these stairs where the Doge’s were crowned, and one unlucky Doge “Marin Falier” was beheaded. On each side of the staircase are two immaculately designed sculptures, one of Mars and one of Neptune, meant to symbolize the power of Venice by land and sea. These statues arrived later and were designed by Tuscan artist, Jacopo Sansovino. 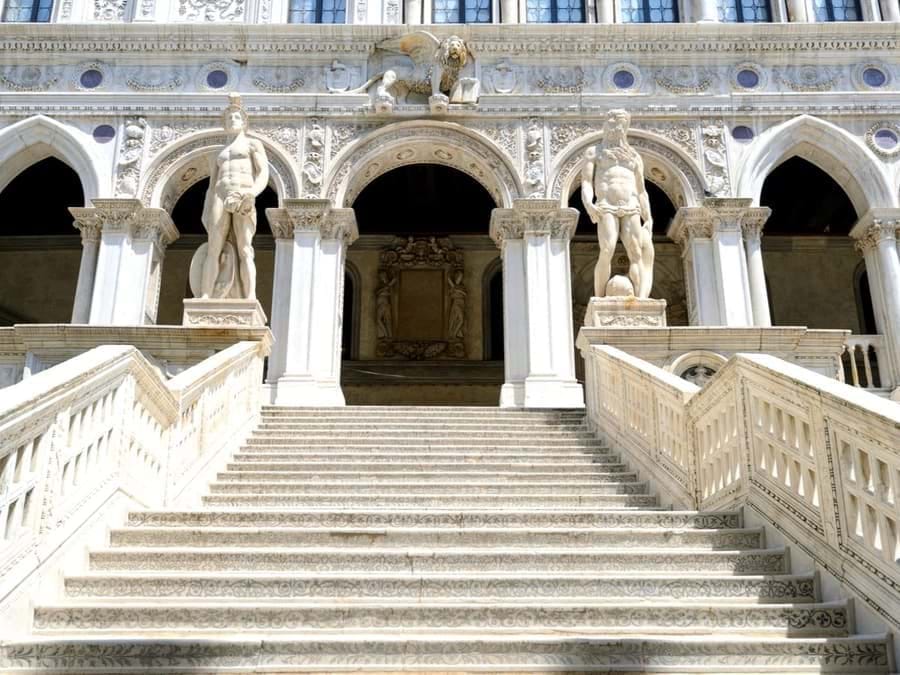 This staircase was designed by Sansovino during the 16th century. The stairs span a 130 steps length and are painted in 24 carat gold. During the republic access to these stairs was heavily restricted, only available to a mere few, including; council members and high-caliber guests of honor. In addition to the gold paint, the stairs are lined in oil paintings and sculpted figures creating a dramatically regal walkway, not to be missed. 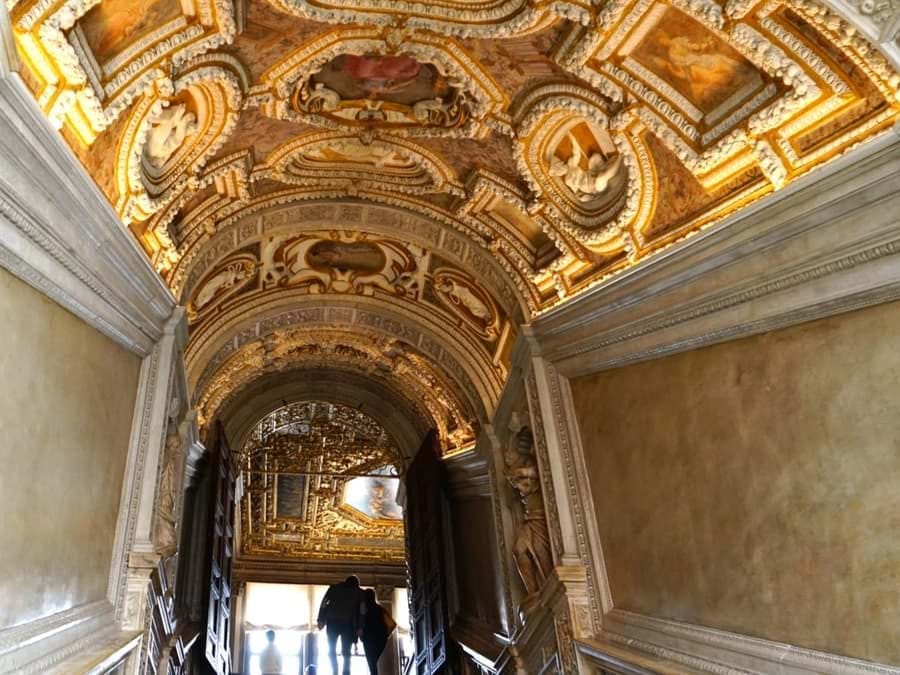 Some argue it to be the most beautiful room in the building. This is where the cabinet met under chairmanship of the Doge and where many important visitors were met with by the republic. The room itself is immaculately decorated, primarily by renaissance painter “Paolo Veronese”. There is an iconic painting over the Doge’s throne depicting victory over the Turks during the battle of Lepanto. Other noteworthy paintings in this room were created by fellow renaissance artist Jacopo Tintoretto. Along the same line of third floor rooms are Sala dell’Anticollegio, Sala del Senato and Sala delle Quattro Porte, each of which hosting their own art collections, sculptures and marble. 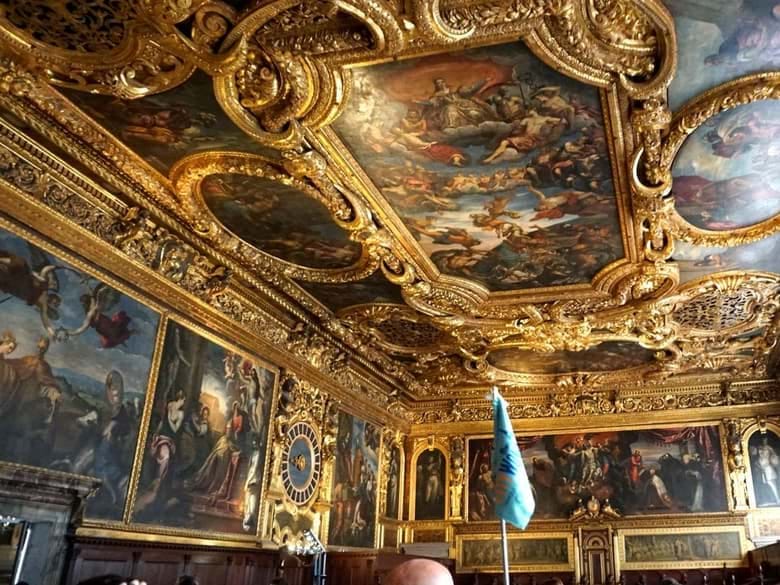 This is home to the lower house of parliament. Sized 54*25 meters, the room is built to cater for the masses that would occasionally fill it. When council was in session, the room needed to cater for upward of 1500 citizens entitled to vote. A fire destroyed much of the original artwork here, but the walls were subsequently filled with some of the most fantastic works of this era. Behind the Doge's throne lie the world’s largest oil painting. Additionally, works by Veronese and Tintoretto can also be found here. 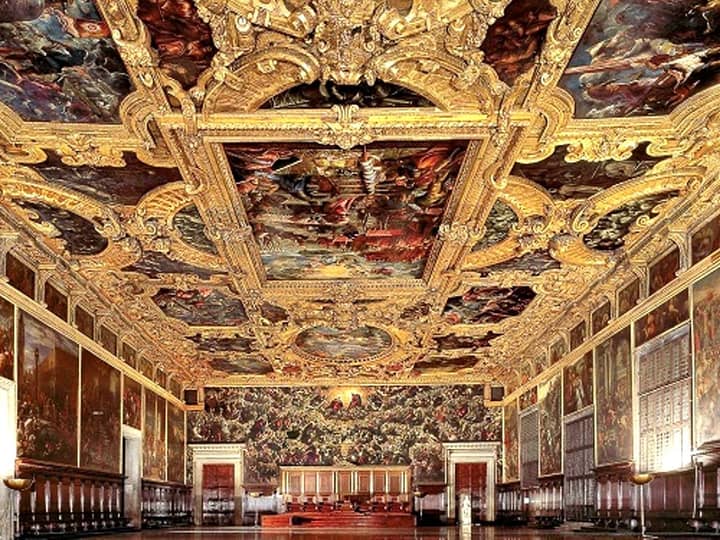 Located in the wings of the palace, these rooms are decorated with engraved wooden ceilings, carved marble chimneys and a selection of oil paintings. Each Doge replaced the furnishings in the apartments with their own selection. It is likely that a Doge would have lived in a more luxurious and larger homestead previous to staying in the palace. However, the humble size and nature of the apartments in the palace were to symbolize the Doge's work as a public servant. 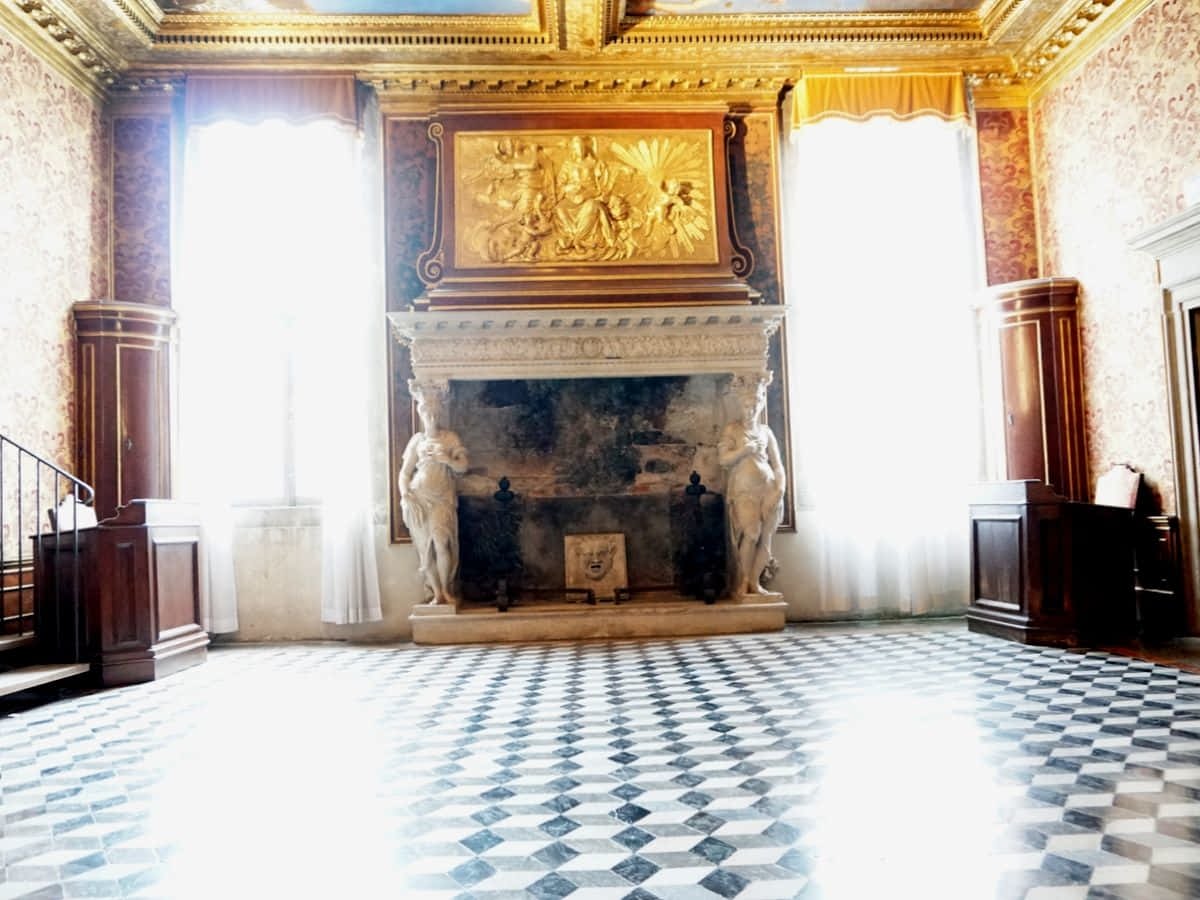 Aptly named by English port Lord Byron in the 19th century. This bridge joins the illustrious Doge’s Palace to the New Prison where inmates and petty thieves were housed. Laws of the Venetian republic were said to be harsh and strict, with sentencing to follow suit. The bridge was named after the legend that you could hear the sighs of the accused as they took their final glimpses of Venice. Built in 1600 by Antonio Contino, this structure is made of Istrian stone and is completely walled in. 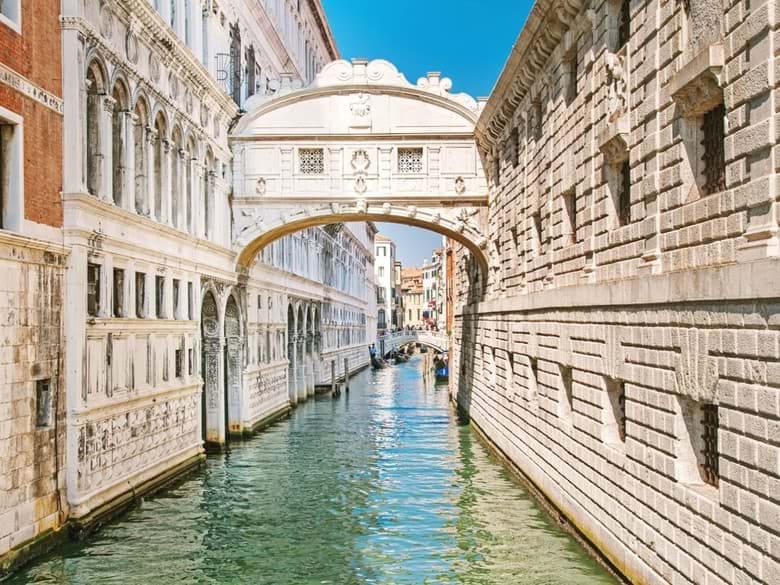 Unavailable in many tours, a visit to the prisons will show you the cells where Casaova spent years of his life, before finally escaping in 1755. You will get a glimpse of what prison life was like, from the ground floor cells (Pozzi) to the roof cells (Piombi). The Pozzi were damp and dark whereas the Piombi were lead walled and heated up like furnaces during the summer months, creating a torturous environment. Make sure to see it all with our “Doge’s Palace Secret Itineraries Tour” 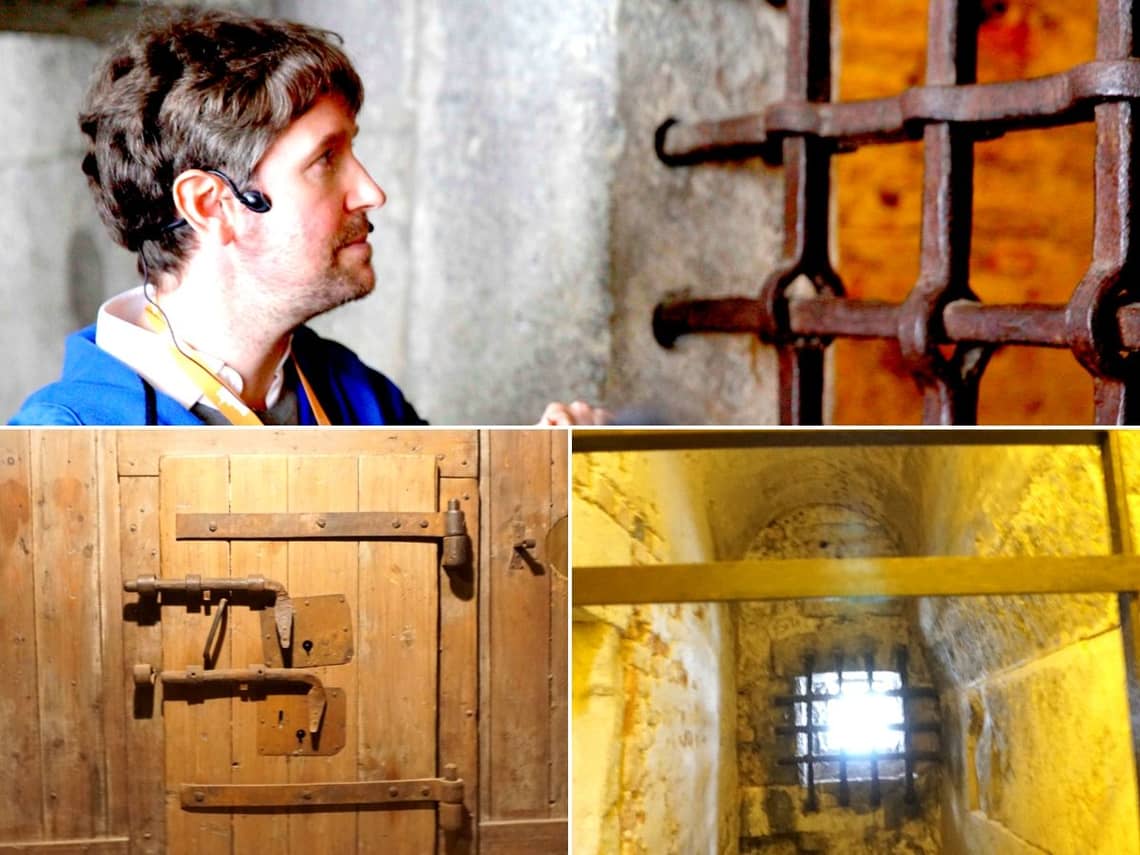 Home to more than 2,000 pieces, this incredible collection of arms and ammunition holds pieces from various different eras and backgrounds. The collection initially belonged to the council of ten and was used by those guarding the palace. Dating as far back as the 14th century, some pieces belonged to famous leaders such as French king Henry IV and some were used in famous battles. 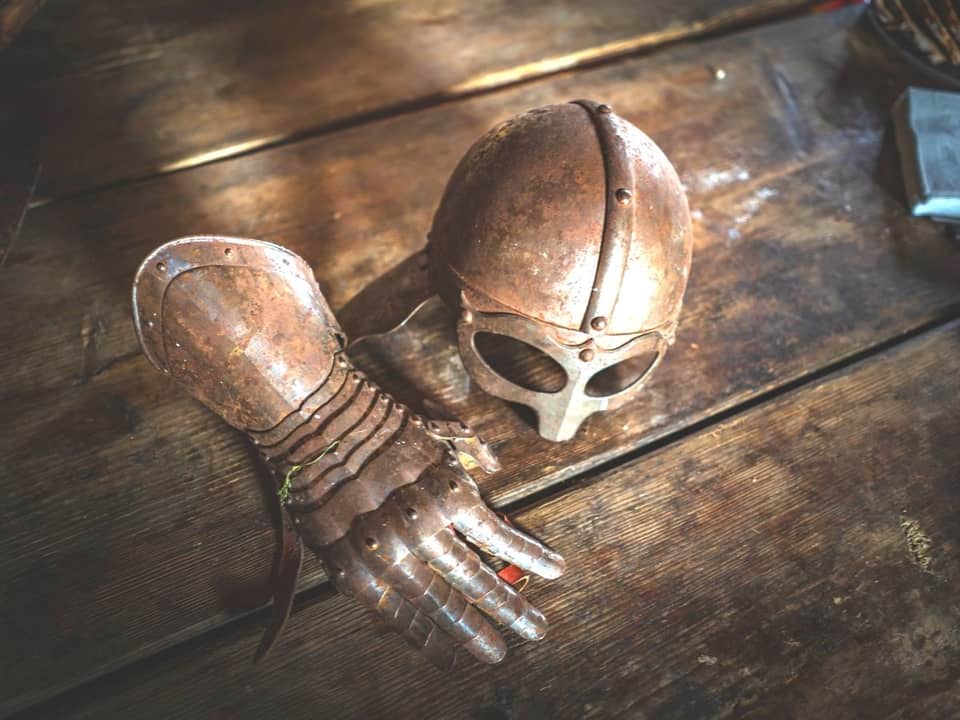 10 Best ways to spend a night in Venice 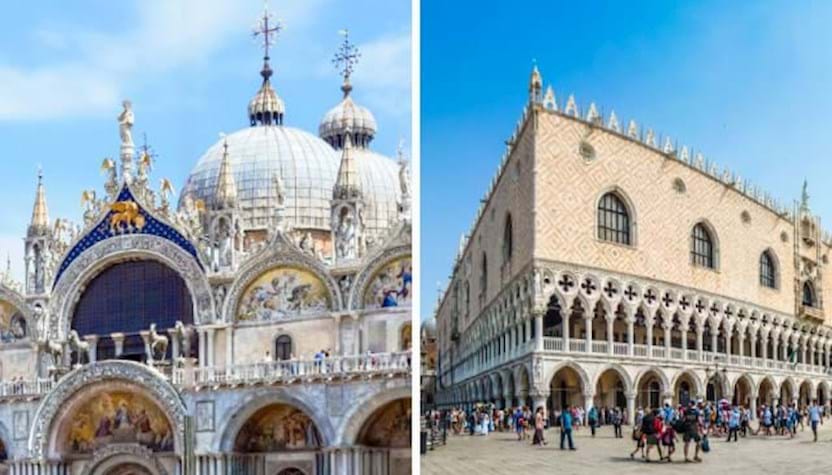 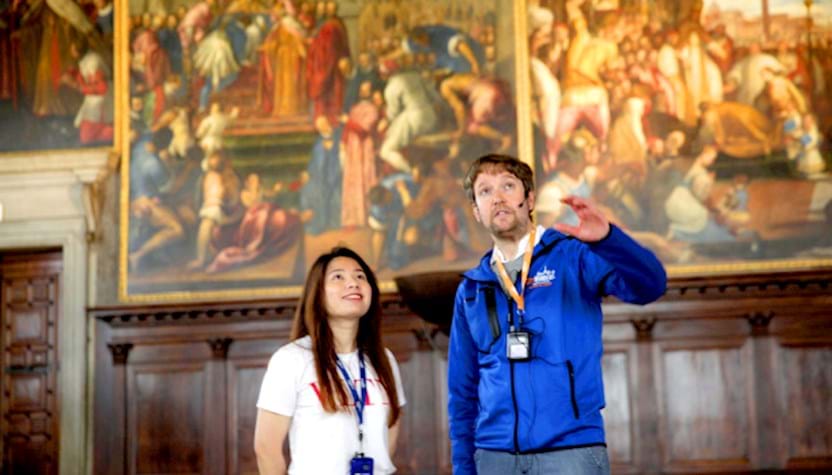