5 Things to See in Park Güell

Situated on the outskirts of Barcelona, Park Güell is one of Spain’s most popular tourist attractions. Built between 1900 and 1914, it was inspired by the ‘garden city movement’ of the 20th century. Built on the edge of the city, this allowed the park and the self-contained communities within it to be surrounded by both clean air and green open spaces. Designed by Catalan architect Antoni Gaudí and named after sponsor Count Eusebi Güell, the estate remained Gaudí’s family home until his death in 1926. From then on, Park Güell became a public space, which still attracts millions of annual visitors today. If you happen to be visiting Barcelona, here’s five attractions not to be missed on a visit to Park Güell. 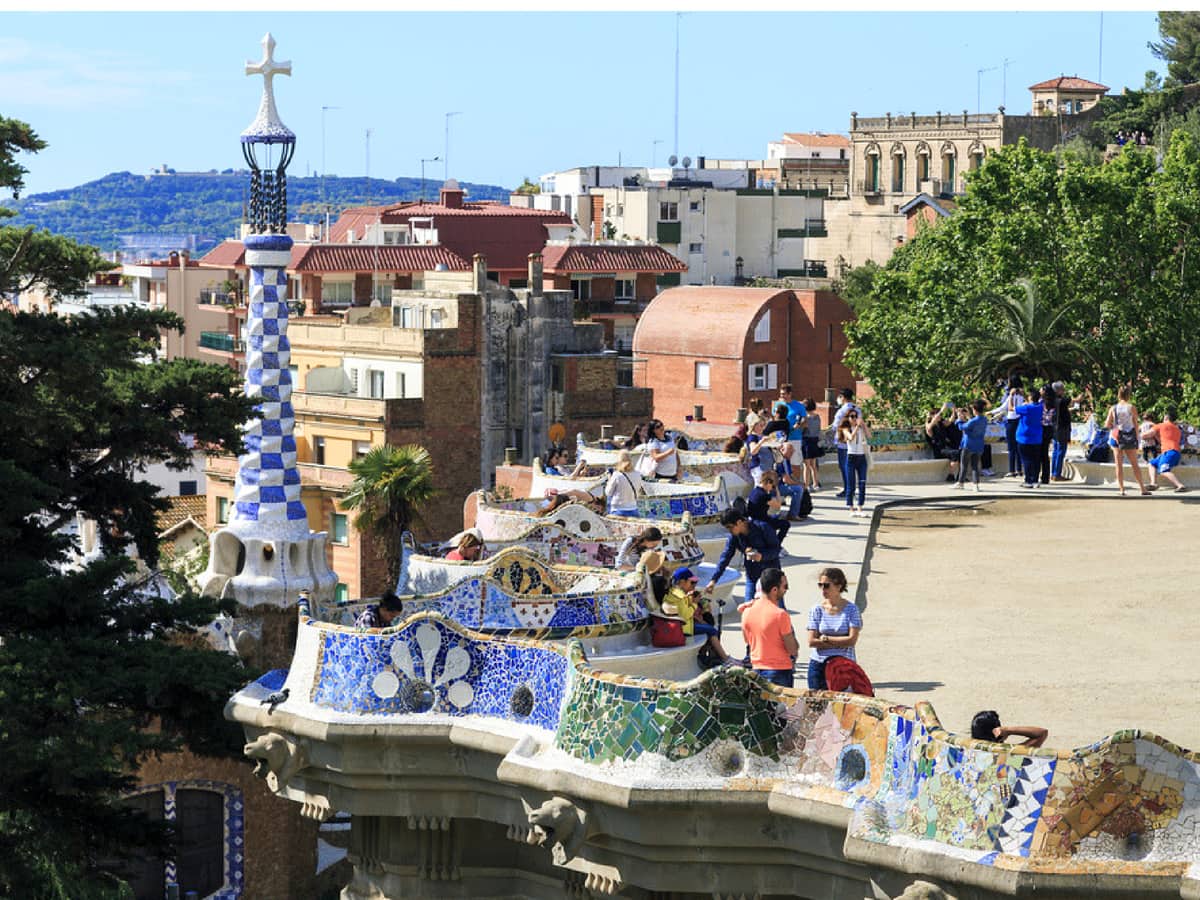 The Serpentine Bench is a well-known mosaic tile bench that winds its way along the terrace around Park Güell. It was created using the Trencandís technique, which was invented by Gaudí and was widely used during Catalonia’s modernism and surrealism periods. Created in a signature serpentine shape and varying vibrant tones for a statement effect, the bench was designed using jettison tiles from a factory close by. Both artistic and functional, rest and take in the beauty of the park in style at the Serpentine Bench. 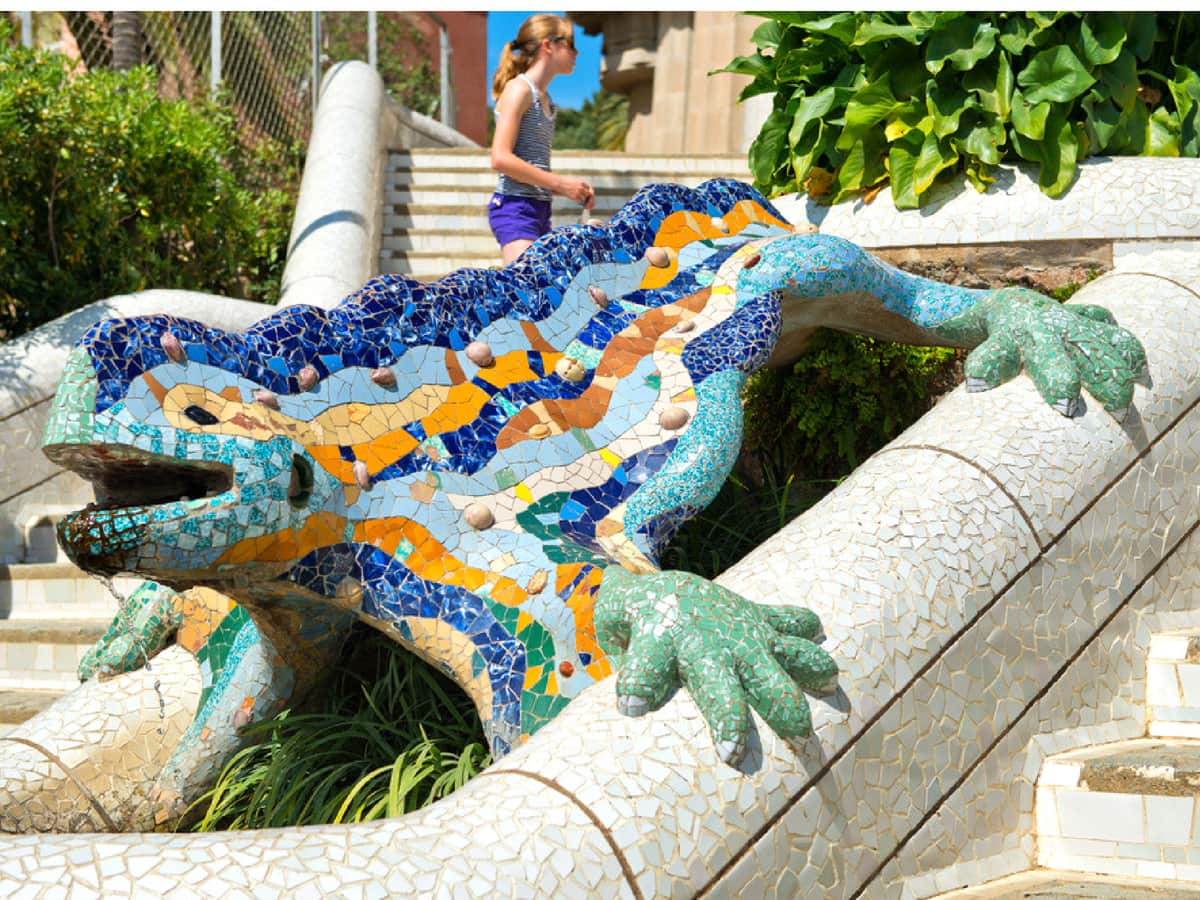 The mosaic salamander statue that resides at the gates of Park Güell acts as the symbol of Barcelona. ‘El Drac’ is known by multiple names, such as ‘the dragon’ and ‘the Park Güell lizard’. Acting as a guard for Park Güell, it was created from brick and is coated with Gaudí’s signature Trecandís technique. Trecandís and serpentine shapes are common themes throughout Gaudí’s work, and Park Güell is an ideal location to see and enjoy both. 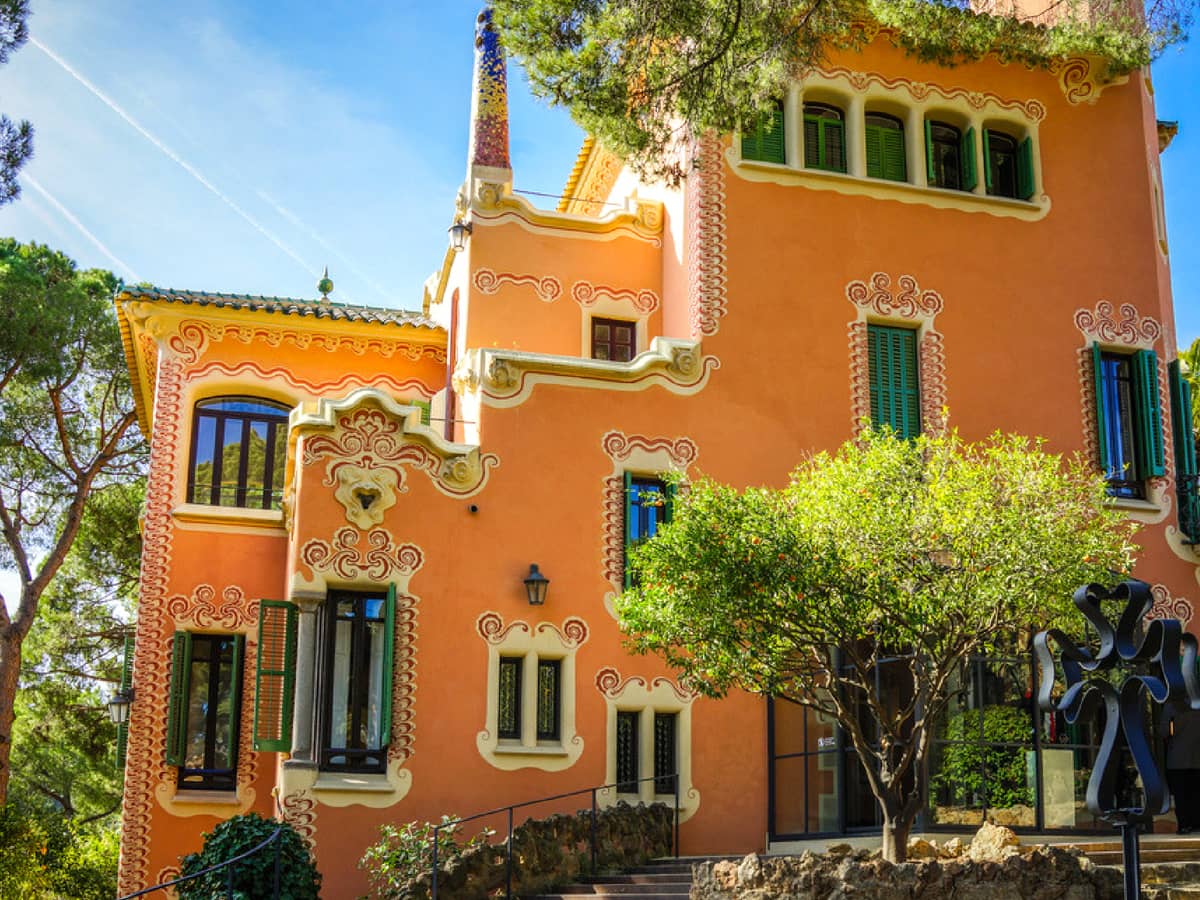 The Austria Gardens were originally meant to be part of the housing estate, with 60 villas planned to be built there. Following the failure of this plan, Park Güell was opened to the public, and the Austria Gardens became a plant nursery. Poignantly named, they gained their title through a donation of specific trees from Austria in 1977. Both houses built on the estate can be viewed from the gardens, one of which became Antoni Gaudí’s home, and now stands as the Gaudí House Museum. Filled with greenery, staircases and terraced balconies to take in the beautiful view, it’s an assured stop on your Park Güell excursion. 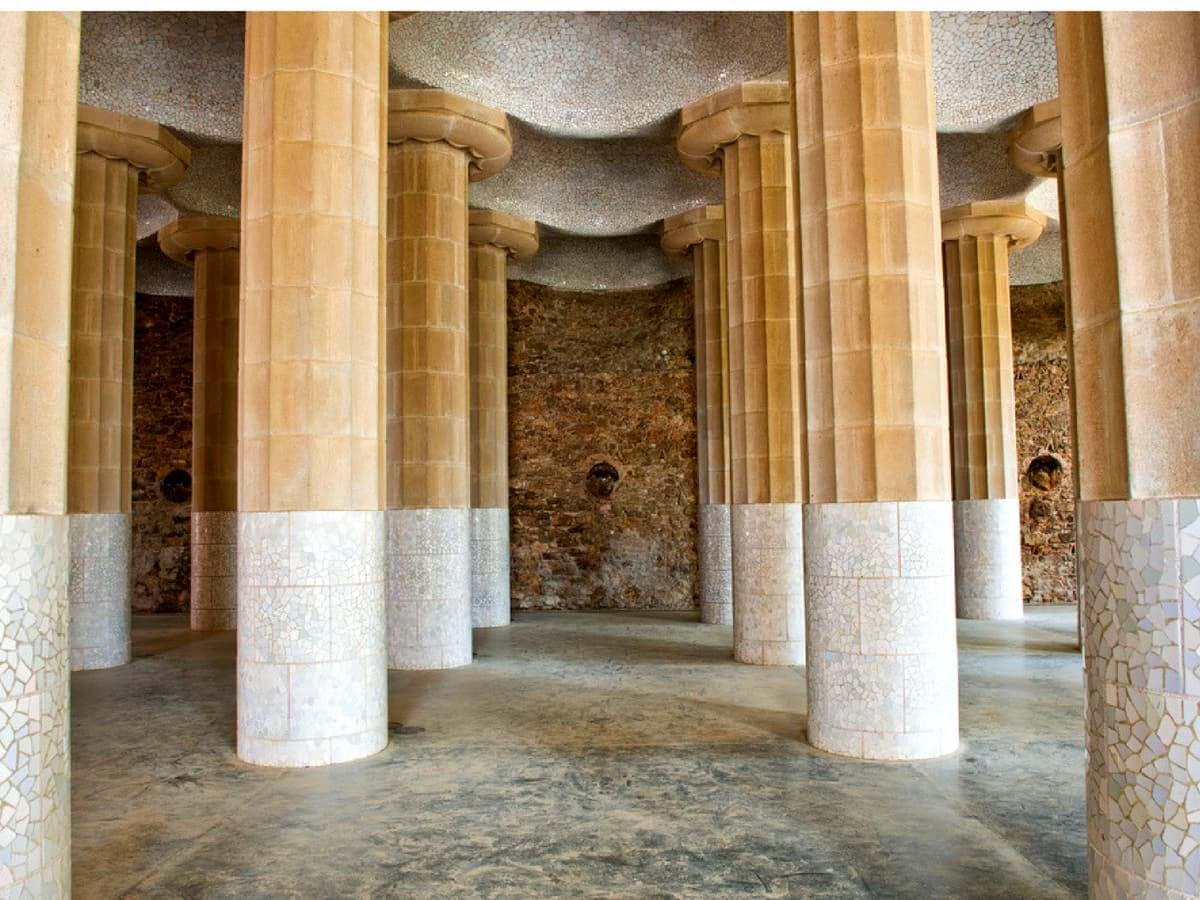 4. Sala Hipostila, or the Hypostyle Room

Originally designed in 1907 as the marketplace of the estate, the Hypostyle Room is made up of 86 columns which the roof rests upon. ‘Hypostyle’ itself means ‘under pillars’, and the design is used for the creation of large constructions, such as public buildings, temples and palaces. The pillars present a height of 19.68 feet (6 metres) and a diameter of 3.94 feet (1.2 meters), and are of the Doric order in an octagonal shape. The ceiling is the focal point of the Hypostyle Room, showcasing all-over white Trecandís, spiral designs and four circular ceiling lamps that represent each season of the year. An effortless statement in design, it’s essential to see on a visit to the park. 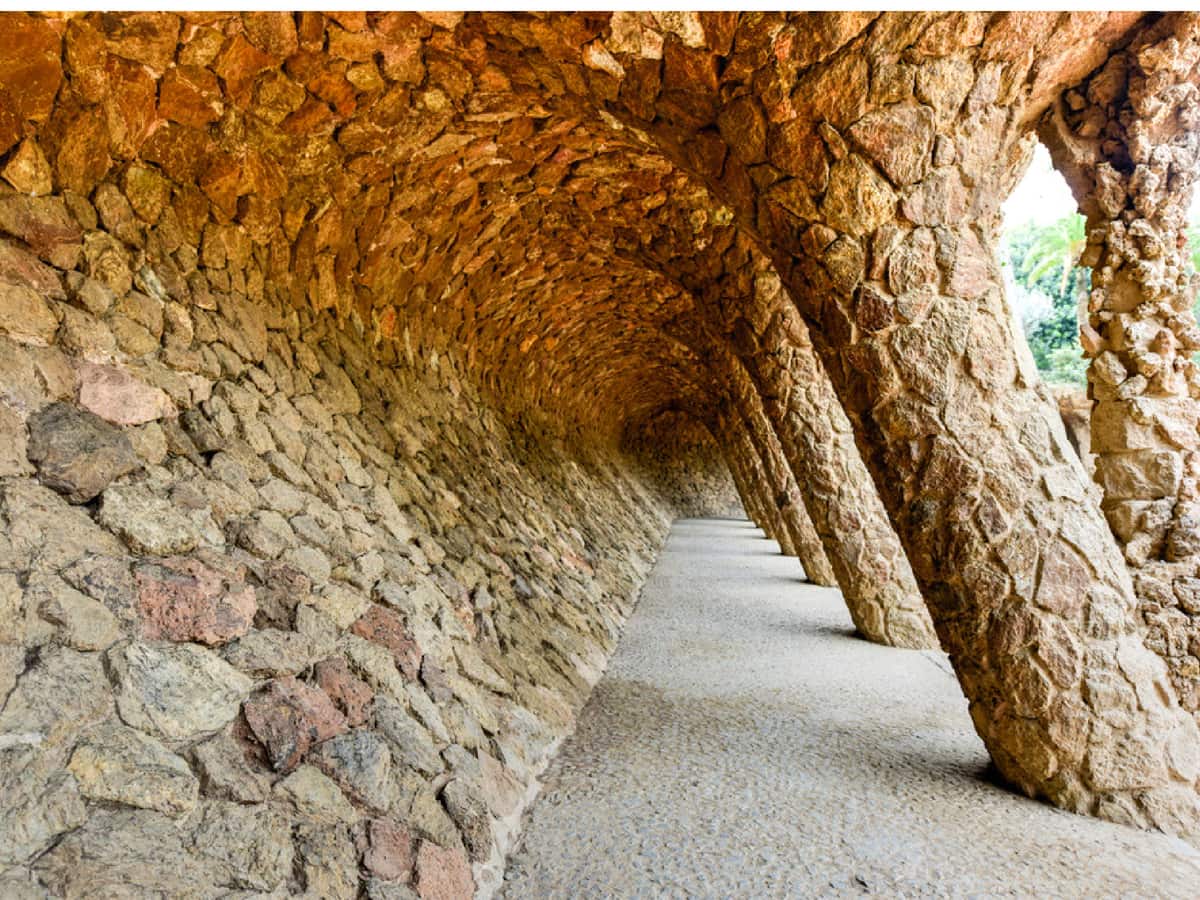 Constructed in a slanted shape, the Laundry Room Portico was designed to mimic an ocean wave. Created with textured walls and coordinating statues throughout, the pillars at the exterior were put in place in order to secure the road above. Gaudí used this design to blend his creativity with the surrounding natural environment. The passages throughout were designed to connect houses to each other subtly, with their textured finish blending into the hillside. Visit the Laundry Room Portico to bask in the shade of the Spanish sun, as well as to witness innovative Catalan architecture at its finest.

The perfect plan for a day out in Barcelona, you can book here for a complete tour of Park Güell and/or the Gaudí masterpieces. Enjoy!

6 Ways to Make the Most of London in the Sunshine