The vast majority of visitors to the French capital fail to make it past the city’s single-digit arrondissements. Which is a real pity as the double-digit arrondissements – and indeed some of the neighborhoods outside the city’s famed Boulevard Périphérique ring road – promise things that the inner districts cannot, namely vast swaths of parkland, chateaux, fabulous flea markets, village vibes and striking residential architecture.

To help you figure out what higher-number arrondissements and outside-the-Périph Parisian neighborhoods are worth a daytrip or even a longer stay, we’ve put together a list of a few of our favorites. 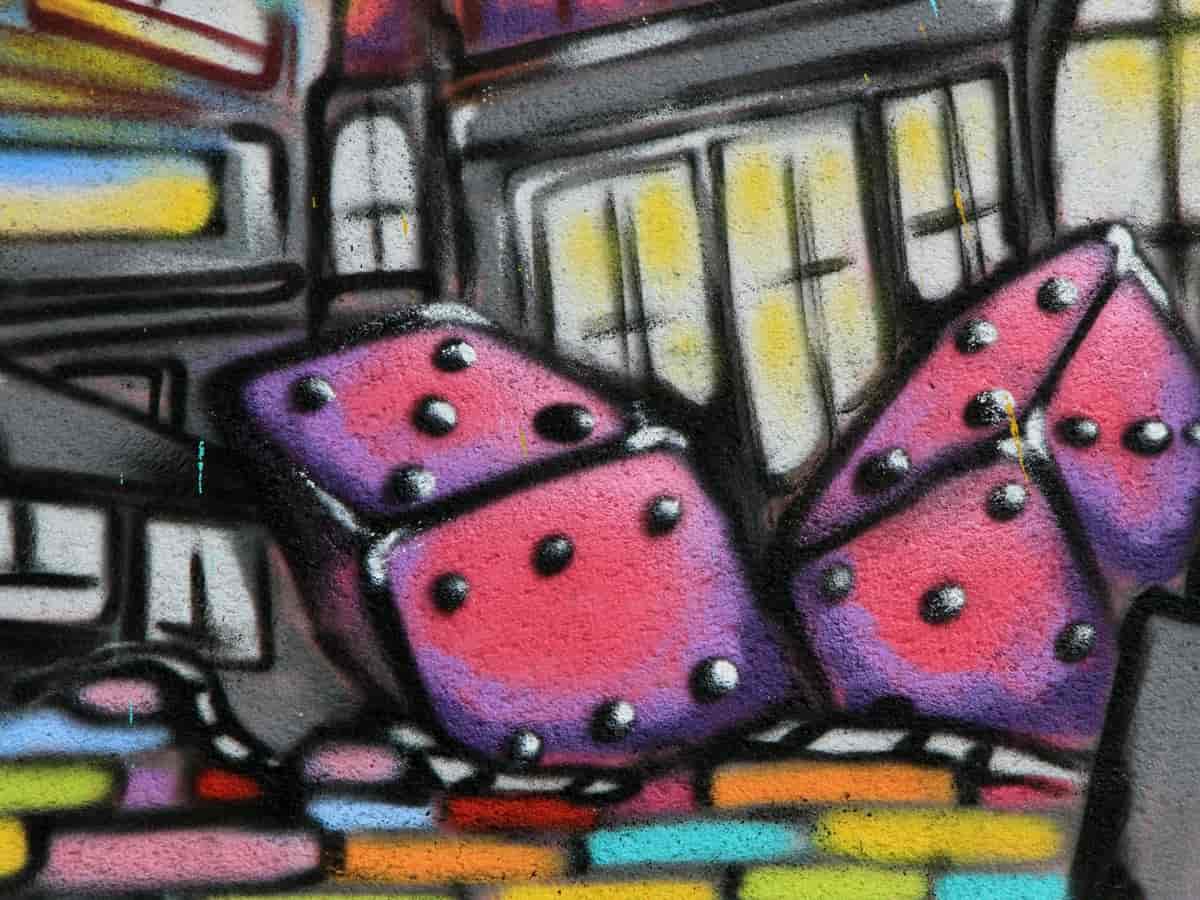 Though this is technically part of Paris proper, this under-the-radar neighborhood is often ignored by tourists. Those who do make the journey here usually do so to pay their respects to Oscar Wilde and Jim Morrison at the Père Lachaise Cemetery. But even beyond the boundaries of the hauntingly beautiful cemetery, there is lots to see and do here. Head to Rue Denoyez to study street art; nary an inch of wall or building surface on this alley remains unsprayed. Stroll to the top of the hill at Parc de Belleville for views of Paris, sip espresso with local bohemians at Aux Folies and attend 80s night or a live jazz Sunday brunch at La Bellevilloise, a building which once served as Paris’s first workers’ cooperative. If hunger strikes during your travels, head to one of the Chinese cafes on Rue de Belleville, where a thriving Asian community can be found. 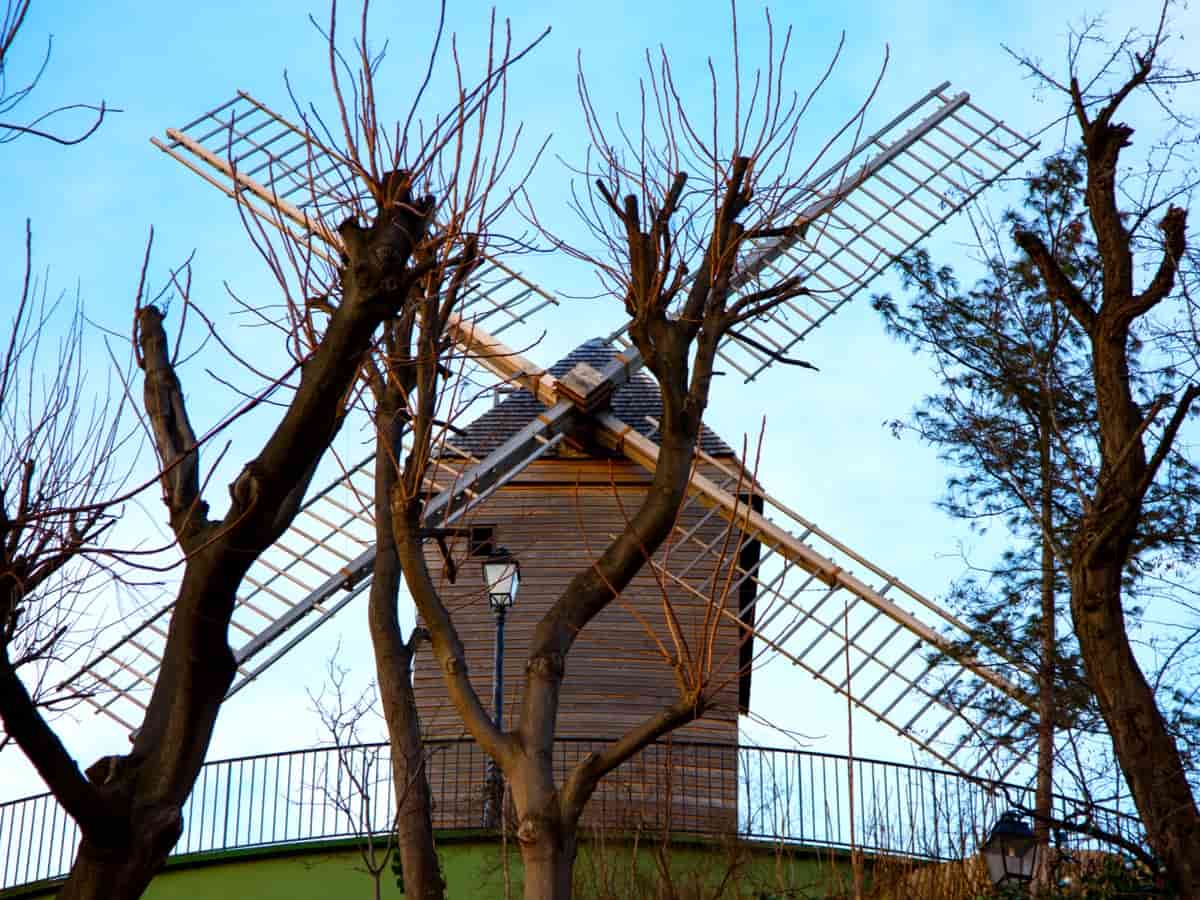 The Moulin Radet dates back to 1717 and is one of two remaining windmills in Montmartre.

This charming artists’ enclave sits within the 18th arrondissement and borders the Périphérique to the north. Before it was annexed into Paris in 1860, Montmartre was a stand-alone village. And despite being swallowed up by the capital, it has managed to retain its small-town vibe as well as two still-functioning windmills and perhaps most improbably, a working vineyard. Besides the famous cafés and cabarets, and the monumental basilica of Sacré-Coeur, from which all of Paris can be seen, Montmartre also has peaceful piazzas and steep sets of lamppost and tree-bordered steps that when stumbled upon in the evening light are nothing short of magical. 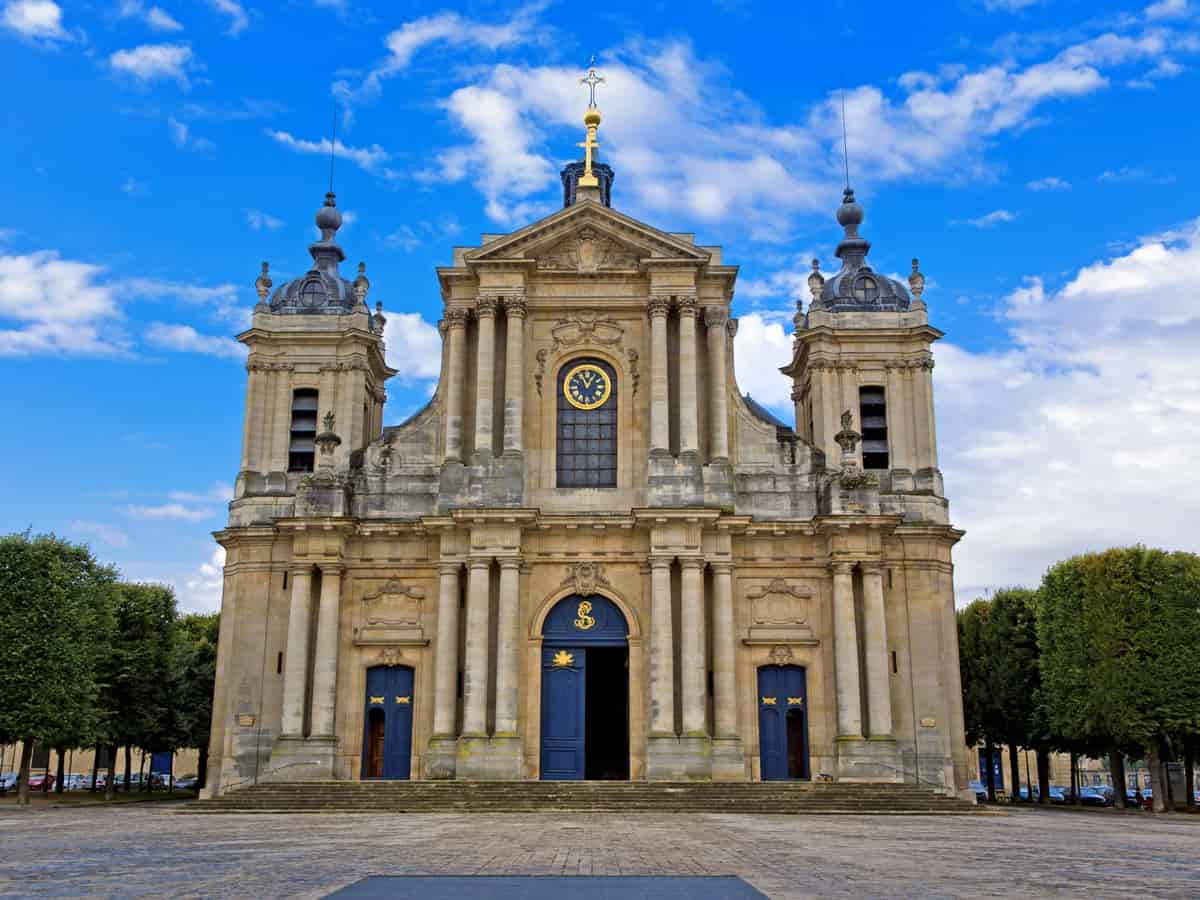 The Church Of Notre-Dame Versailles is where the baptisms, Marriages and deaths of the French Royal Family were officially registered.

Versailles is not technically in Paris at all, but seeing as it is just a 20-minute RER ride away from the capital, it certainly qualifies as a potential daytrip destination. Of course, the main reason for coming here is to view the Sun King’s lavish palace. There is so much to see within the complex itself that it is worth – silly as it may sound – setting some goals and deciding what sights you want to prioritize.

If you want to stay a little longer in Versailles, you won’t be disappointed. You could always return to the palace complex (it’s big enough that you’re never going to cover it all during one visit), but if you want to see what Versailles is like away from the royal compound, there are lots of options too. Visit on Tuesday, Friday or Sunday morning to see the city’s fabulous outdoor food market. The market is pretty much a sacrosanct part of local life and you’ll see many residents poking, prodding and smelling the produce on offer before making their purchase. It’s a good place to pick up picnic provisions.

There are a few churches worth checking out too, including the neoclassical Notre-Dame de Versailles, which dates back to the 17th century, and the mid-18th-century Cathédrale Saint-Louis de Versailles. Anyone with an interest in antiques should trawl the picturesque lanes around Passage de la Geôle where beautiful old objects, ranging from books to antique furniture to vintage jewelry to retro toys, are sold.

Located just west of inner Paris, this leafy neighborhood is the perfect respite for anyone who wants a break from the urban hubbub. The vast wooded Bois de Boulogne, a former hunting ground that spreads across some 2,100 acres (850 hectares), is big enough to get lost in and encompasses walking paths, horse-riding trails, cycle route, picnic areas, landscaped gardens, an amusement park and several lakes.

Also perfect for ambling around is the Albert Kahn Musée and Jardins. Each section of the garden follows a different global style; Japanese, English and French are all represented. Inside the museum, meanwhile, are photographs and films made by early-20th-century financier and philanthropist Albert Kahn, which serve as a fascinating anthropological documentation of various world cultures. Then there is the Musée des Années 30, a museum that is packed to the gills with a selection of gorgeous 1930s’ finds, including art deco furniture, paintings and sculptures. Perhaps the best part about Boulogne-Billancourt is its accessibility. It’s a breeze to get there, with Métro lines 9 and 10 both running out here. 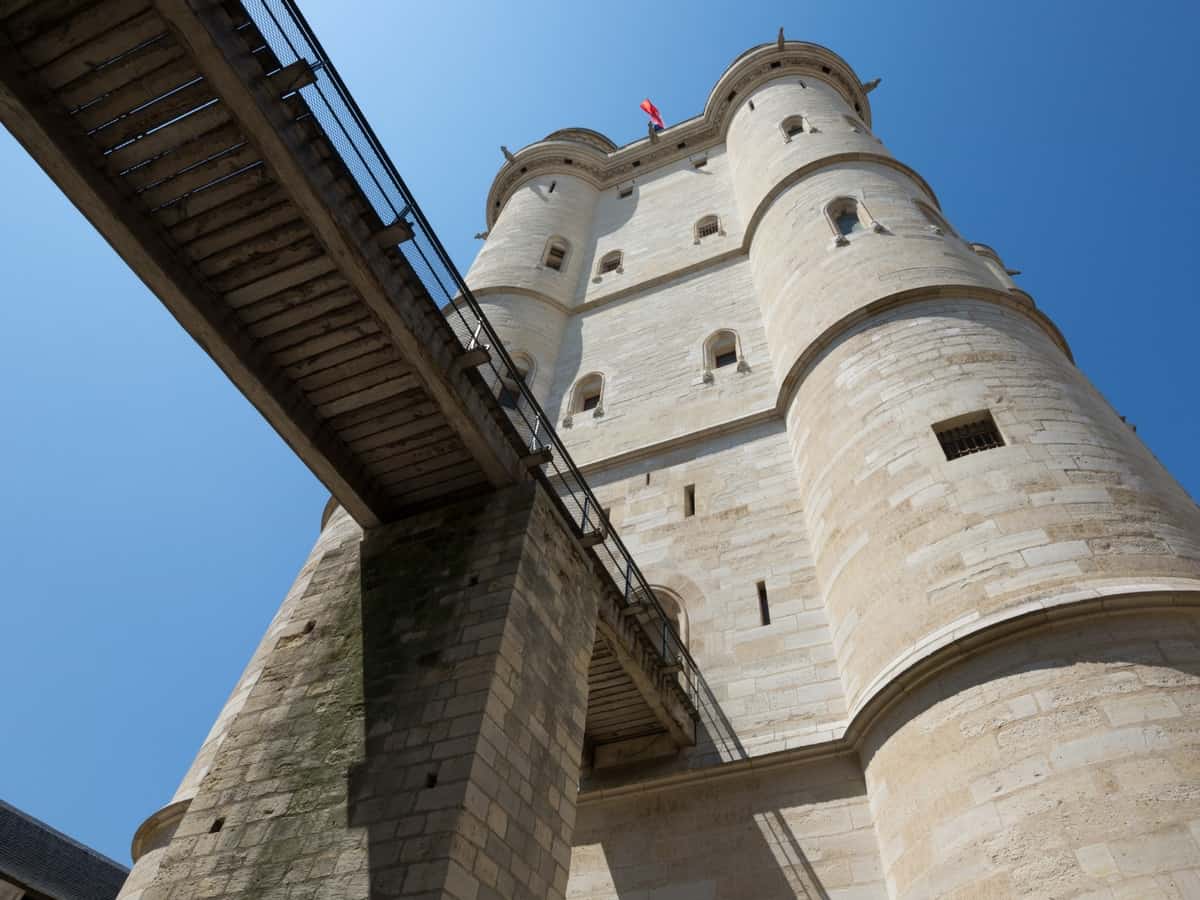 This massive fortress, Le Chateau de Vincennes, was once used as the royal residence.

Straddling inner Paris to the east are these two appealing suburbs. Though they border each other, geographical proximity to the city is about all they have in common. Montreuil is arguably the cooler of the two, drawing artists and bohemian types who want easy access to Paris via Métro line 9, but without the hefty inner city rents. It’s the place to go for microbreweries, hip wine bars, converted warehouses and graffiti-slathered walls. Interestingly enough, it was once an agricultural quarter, with Montreuil’s much-loved fruit being served to French, English and even Russian royalty. Though its fruit-growing traditions have died out, a short stretch of its once-famous murs à pêche (peach walls) has been restored. Montreuil also features Les Puces de Montreuil, a vast flea market where sellers hawk second-hand everything and anything. You won’t find a carefully curated selection of objects, but if for you, the thrill of antiquing lies in the hunt, you’ll certainly enjoy prowling the stalls here. With so few visitors making it out this far, you are less likely to be subjected to tourist mark-ups too.

While Montreuil was traditionally the home of agricultural and later industrial laborers, its next-door neighbor, Vincennes was historically at least, a blue-blood hangout. Take Métro line 1 out to Vincennes to view the Château de Vincennes. This one-time royal residence is no mere show home, but rather a real fortified complex dating back to medieval times, complete with defensive walls and drawbridges. Though some of the châteaus interior details have been lost, it’s still well worth a visit. Vincennes also boasts one of Paris’s biggest park, Bois de Vincennes. Another former royal hunting forest, this lake-dotted park holds a Buddhist temple, restaurants, a farm and a theatre complex, within its boundaries.

Though it doesn’t have the grandeur or old-world charm of inner-city Paris, Noisy-le-Grand is not without its attractions. Most notably, it’s got a couple of striking postmodern residential complexes – the work of internationally renowned Spanish architects Ricardo Bofill and Manolo Nunez. The architects’ ambitious projects, Les Arènes de Picasso and Les Espaces d’Abraxas, were commissioned in the late 1970s and early 1980s. A direct response to the failure of earlier social housing projects, these two dramatic complexes are quite the sight to behold. Depending on which part of the vast estates you happen to see first, you may feel you’ve stumbled upon a movie set for a sci-fi or a Roman epic. Though the developments may not have succeeded in becoming the utopian community wonderlands the architects envisioned, they are nevertheless fascinating and somewhat surreal sites, and for anyone with even a passing interest in architecture, a must-see.

If this post has you itching to see more of Paris, browse our tour offerings for the French capital. We’ve got excursions to Montmartre and Versailles as well as a Pére Lachaise Cemetery tour covering all the famous graves.

The 6 Most Spectacular London Events this Summer 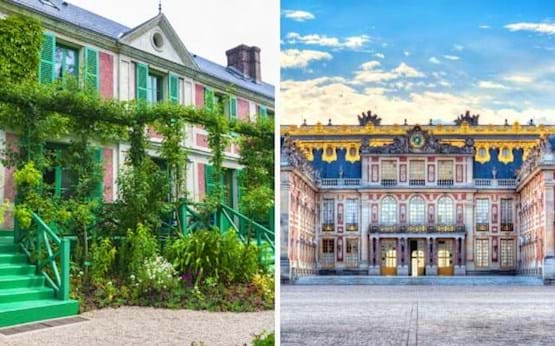