To get you in the mood for Halloween and All Saints Day we’ve found some of the most intriguing stories from the infamous Père Lachaise Cemetery in Paris. Now, before you start googling costume idea’s and zipping into shops to buy the Halloween necessities we need to get something straight: The French don’t celebrate Halloween as we know it. They don’t even call it Halloween, it’s called All Saints’ Day and it’s a more spiritual event, in which the people go visit the graves of their lost loved ones. So, with that in mind don’t expect to find a miniature carnival and haunted house while dressed as an ancient minotaur when visiting Paris. And don’t charge down the Champs-Elysées dressed as a knight ready for the joust, you’ll certainly get a few side-wards glances if you do.

What Paris does have, like many other cities across the globe, is a massive and extremely charismatic graveyard scene. The Père Lachaise Cemetery jumps to the top of the list and with people like Jim Morrison, Oscar Wilde, Chopin and Proust resting there you can imagine why. This isn’t like the solemn Cemetery attached to your local church, it attracts hundreds of thousands of curious travelers each year. Some come to witness the history of Paris through the lives of the deceased, while others come in an almost pilgrimage style to worship their idols.

It’s not uncommon to be strolling through this iconic cemetery to spot a few of these pilgrims trekking to the 6th division with a six pack of beer tucked under their arms to see Jim Morrison, famous lead singer of The Doors. We do not recommend celebrating Jim in this fashion since it’s a touch insensitive. Considering the epic life of Jim Morrison, his grave was always going to be the site of a few interesting stories. 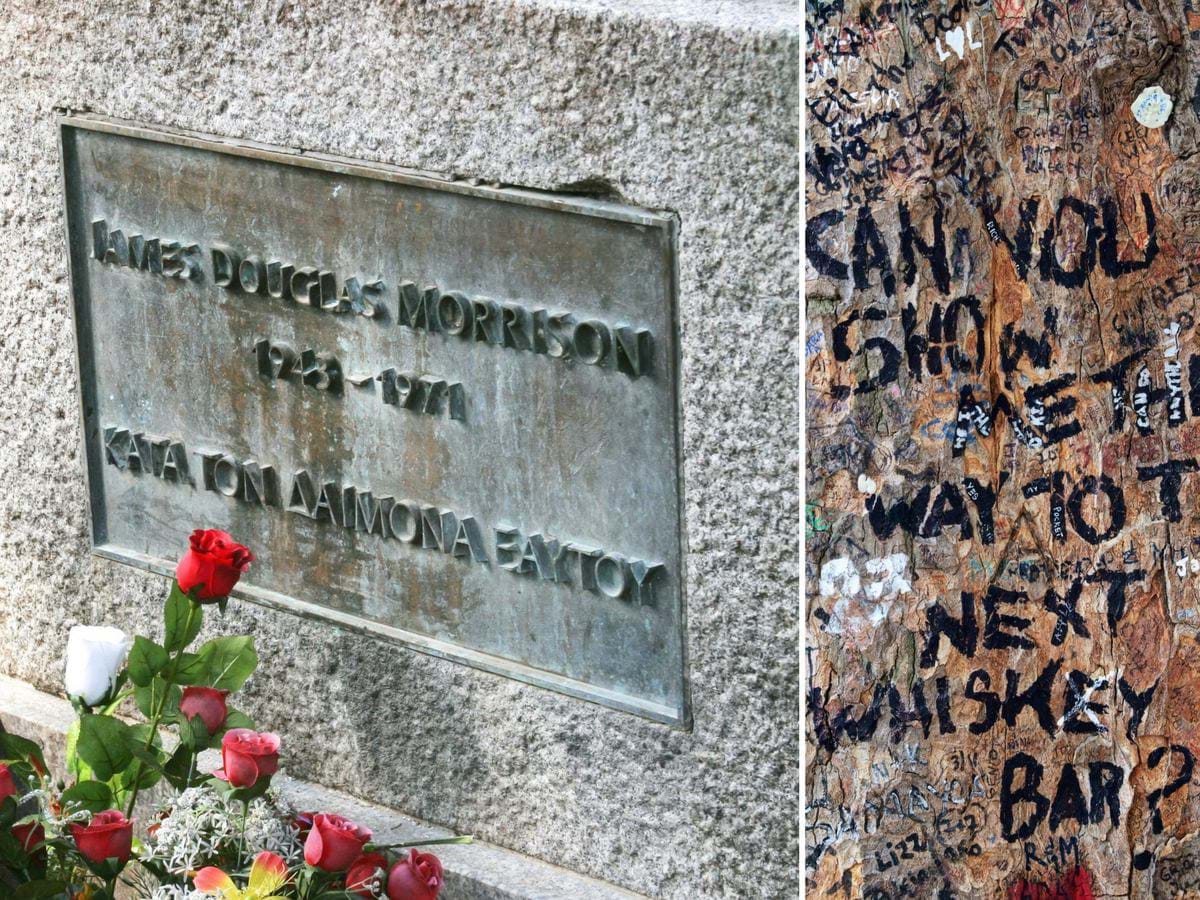 Following numerous faux death reports, when in July 1971 Morrison actually passed away many of his closest fans and friends didn’t believe it. So, following the wily nature of his death, it was kept a secret while Pamela Courson, his wife, lobbied to have this famous American Singer, with quite the reputation, given a spot in one of Frances most prestigious graveyards. You’ll find Jim Morrison in the Poets Corner of Père Lachaise, why? Because, in an attempt to to trick the powers that be, Pamela had his death certificate recorded as “Jim Morrison, Poet.” The gravestone was repeatedly stolen by adoring fans until 1981 when a Yugoslavian fan erected a beautiful white bust. After being defaced for nearly 7 years, this too was stolen. Finally, Jim’s parents erected a stone monument to the great musician reading “Against the devil within” that still stands today, graffitied yes, but still standing. Let’s not even start on the conspiracy theories that the singer is still alive after faking his own death.

Morrison isn’t the only dearly departed soul whose grave causes a little scandal at Père Lachaise. Victor Noir was a French Journalist made famous for the way he died, he was murdered by Napoleon Bonaparte’s great nephew and started a chain of events that would ultimately lead to the end of Napoleon’s reign. Originally Victor Noir was buried in the local cemetery Neuilly but due to the affections of the general public his body was exhumed and transferred to Père Lachaise and was to be given a grand tomb with a sculpture to mark his prominence. When the move occurred, a witness claimed to see Noir’s brother, Louis, removing his skull and the legends claim the skull occasionally spoke with Louis… creepy, right?! When big brother died the skull was reportedly buried with the rest of his body. 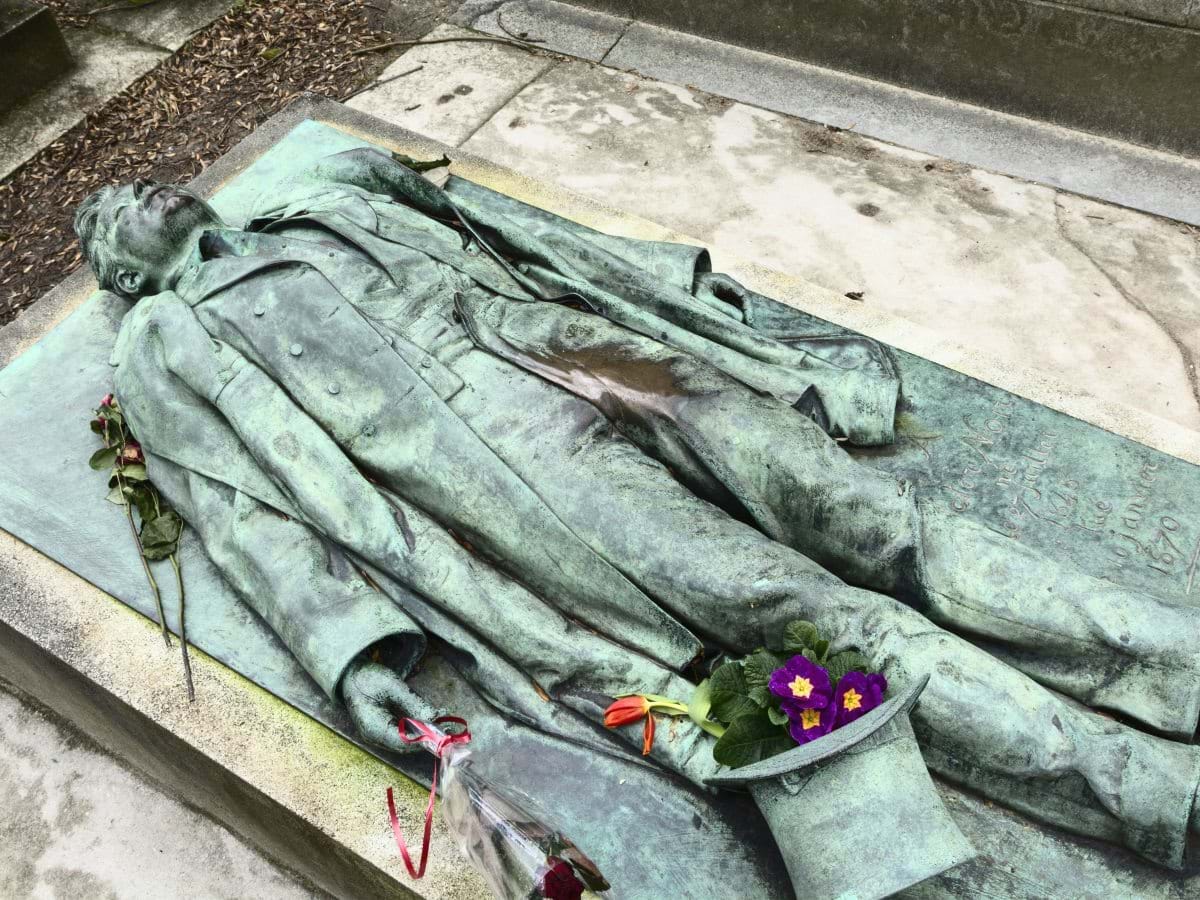 The well-worn grave of Victor Noir, kept shiny by the fertility legend.

Stranger yet, Victor Noir’s grave has become the center for a rather risqué myth! According to legend if you kiss the sculpture adorning his tomb and some other things, you’ll enhance your fertility and enjoy the process, if you know what we mean. Other variations suggest you’ll find a husband within a year.  You’ll fully understand the magnitude of this legend when you see how polished some areas of his tomb are. The myth resulted in thousands of Parisian woman “defacing” the infamous tomb and when authorities tried to erect a fence to protect it, there were protests! You can’t make this stuff up! 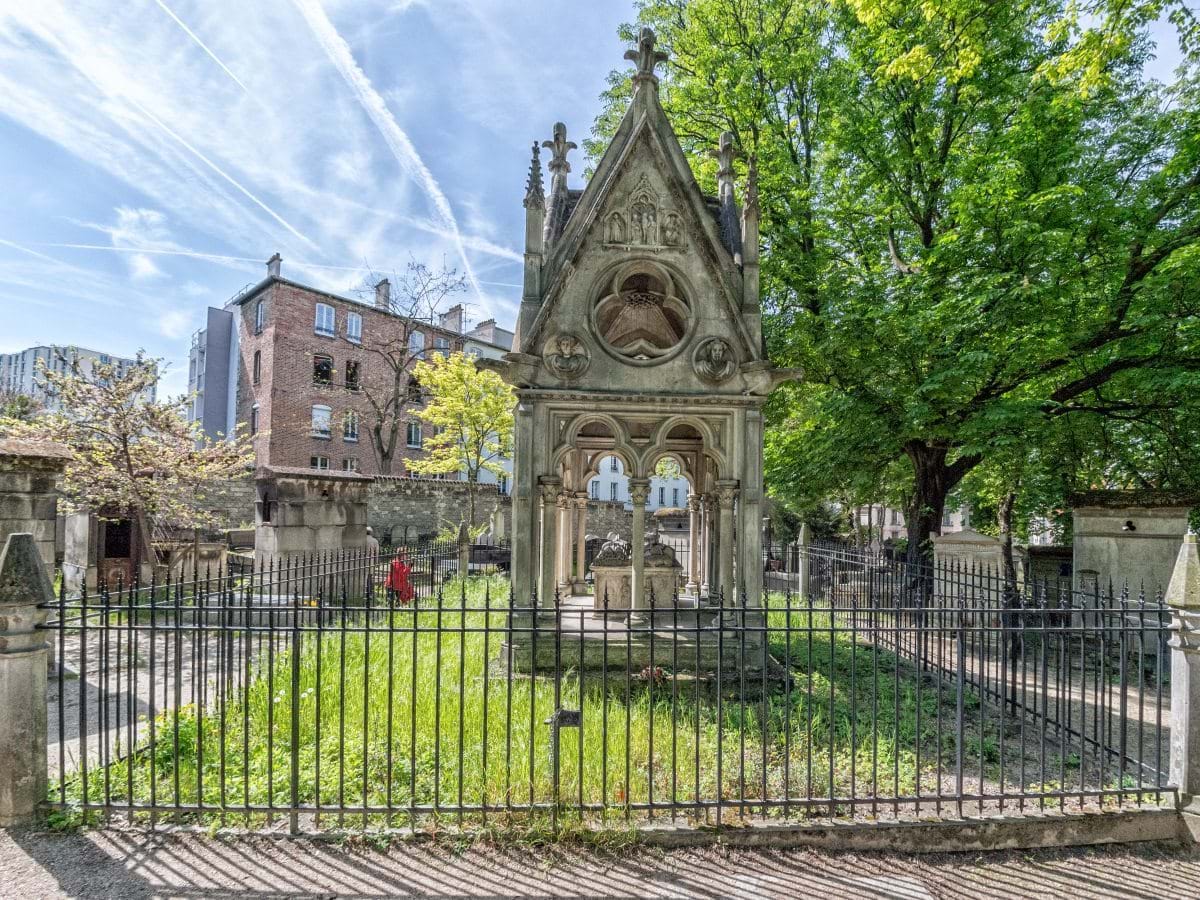 Abelard and Heloise’s grave in the Père Lachaise is as enchanting as their tragic love story.

On the subject of finding a husband, there is one tomb in particular that will send all the hopeless romantics flocking! Abelard and Heloise were two star crossed lovers separated by social standing in the Middle ages. Abelard was a great French philosopher hired to teach a noble woman, Heloise. The two fell madly in love, began an affair which lead to an illegitimate child and a secret marriage.  Once they were discovered Heloise was sent to a nunnery to live out her days in the presence of God and poor Abelard was reportedly castrated. The two would go on to exchange letters discussing everything from religion to philosophy and most importantly their everlasting love for each other. After the death of Heloise her bones were supposedly buried alongside Abelard. Over the years their grave site has been moved repeatedly only to finally make their way to the Père Lachaise Cemetery in 1817 where a massive monument was built in their honor. Traditionally, people leave letters at their crypt in tribute to the couple or in the hopes of finding their own love.

So, whether you’re looking for love or to reminisce over one of the most famous musicians from the infamous 27’s club, the Père Lachaise Cemetery will certainly live up to the expectation. The Cemetery covers 45 hectares so do come up with a plan of action before heading over on All Saints Day. Although getting lost presents its own little adventure, you may want to pick up a map, prepare with a virtual tour or take a Père Lachaise Cemetery Tour if you’re going to see the big names.

7 Parks for your 7 days in Rome

Our incredible Paris Catacomb Tours take you on a fantastic journey into the chilling secrets buried beneath France's capital city. Gain privileged access to restricted areas that are closed to the general public to see the enigmatic treasures others don't.