It’s impossible to be overly superlative in describing Rome. The city is a feast for the senses - and a delectable sensation for the tastebuds. Gorging yourself on pasta, pizza, and many other amazing meals when in Rome is allowed. In fact, it’s mandatory.

But the city of Romulus and Remus can also be overwhelming for those who wish to eat the best food in Rome or find the best places to dine in Rome. It’s a big metropolis and you don’t want to waste any time. Don’t worry, we’ve got you covered.

Hungry tummies ready? Off we go!

What to Eat in Rome

You’ll have no doubt about what to eat in Rome. Everything!

But being able to identify a few Roman dishes makes your trip to this ancient city of la dolce vita all the more meaningful.

Below is a list of five foods that is as Roman as a Fellini film.

• Carciofi alla Romana - artichokes simmered in oil and herbs and a delicacy of the Jewish Ghetto district
• Cacio e Pepe - pasta with sheep’s cheese and pepper
• Gelato - do not even think of leaving Rome without trying the ice cream!
• Pizza al taglio - while the whole world now lays claim to pizza, but pizza al taglio (pizza by the slice) is distinctly Roman - and always served with no frills and no fuss
• Suppli - rice croquettes - a classic Roman takeaway

No matter which of our tours you go on to explore Rome, you’ll have an opportunity to enjoy some of the finest food on the planet. The best food in Rome is to be found as you explore, discover and engage with the city. Follow your nose to find the best places to eat in Rome and be prepared for a culinary extravaganza!

You’ll be a bona fide Italian foodie the minute you step into the Trastevere district. Built as a medieval city within Rome, the narrow winding roads, hidden monuments, and churches, charming piazzas and rooftops make for an authentic Roman experience like no other. This is no sanitized tourist area, but a living and breathing bohemian district.

Try any of the small osterias (bistros) here to send your tastebuds straight to heaven. They’re family-run businesses and there’s a high likelihood that a nonna is running the kitchen and cooking everything you order. La Gensola is a must stop for seafood lovers and Da Enzo serves informal delicious meals with aplomb. But really, you can’t go wrong wherever you eat in Trastevere.

This part of town is known for having the best pastry shops. Indulge your sweet tooth to your heart’s delight 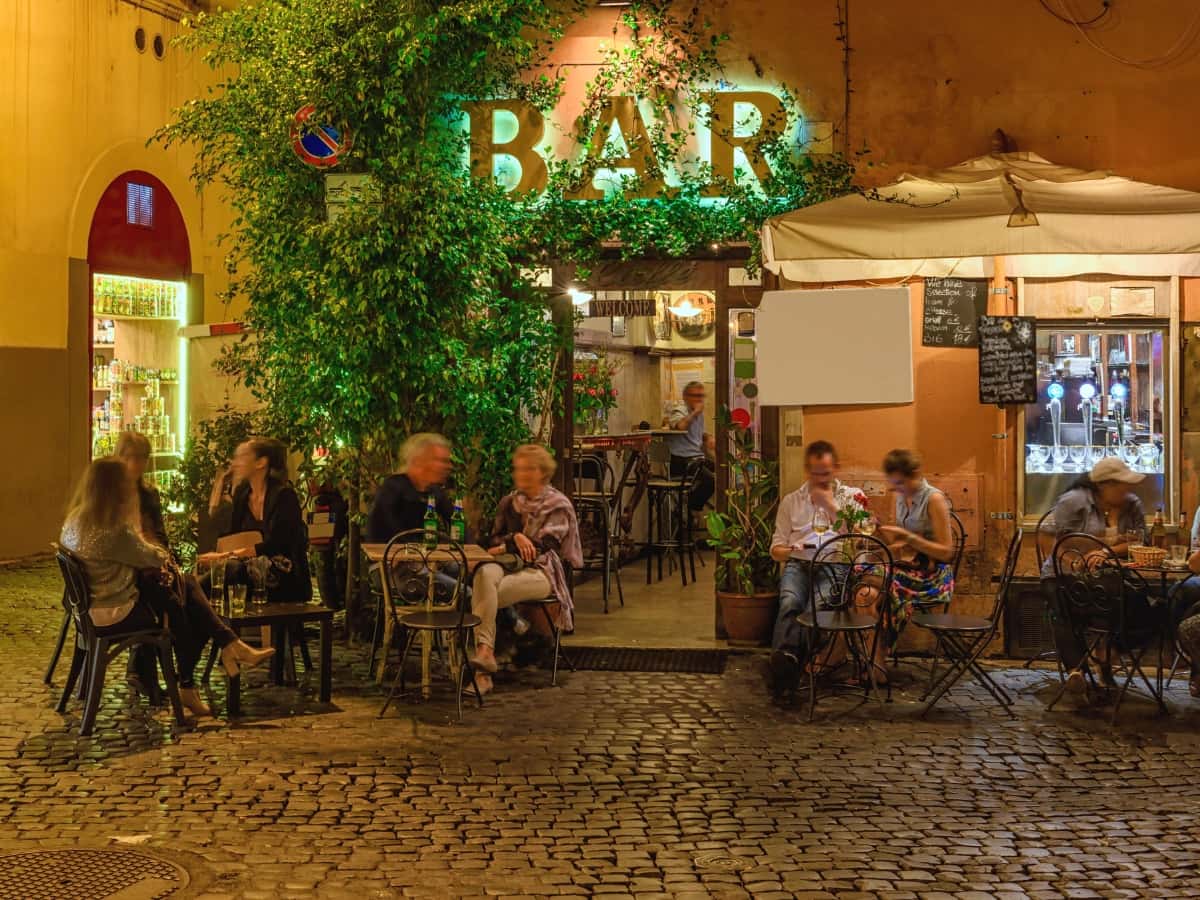 Dining out in Trastevere

Monti for a Wine Bar Vibe

Monti is extremely trendy and draws a mixed crowd of locals and visitors alike. Artisan food shops, smart restaurants, and intimate wine bars serve the needs of anyone looking for a foodie experience and a chance to sit back and people watch.

Notable mentions have to include Zia Rosetta for lunches or snacks (their sandwiches will make you instantly understand why Instagram was invented), and Ai Tre Scalini for a wine tour and tasting in a living museum (a winery has existed on this site since 800 AD).

Make sure you save a place for a sweet something when you’re in Monti. The chocolate you’ll find at Grezzo is a gift from the gods. Fact. 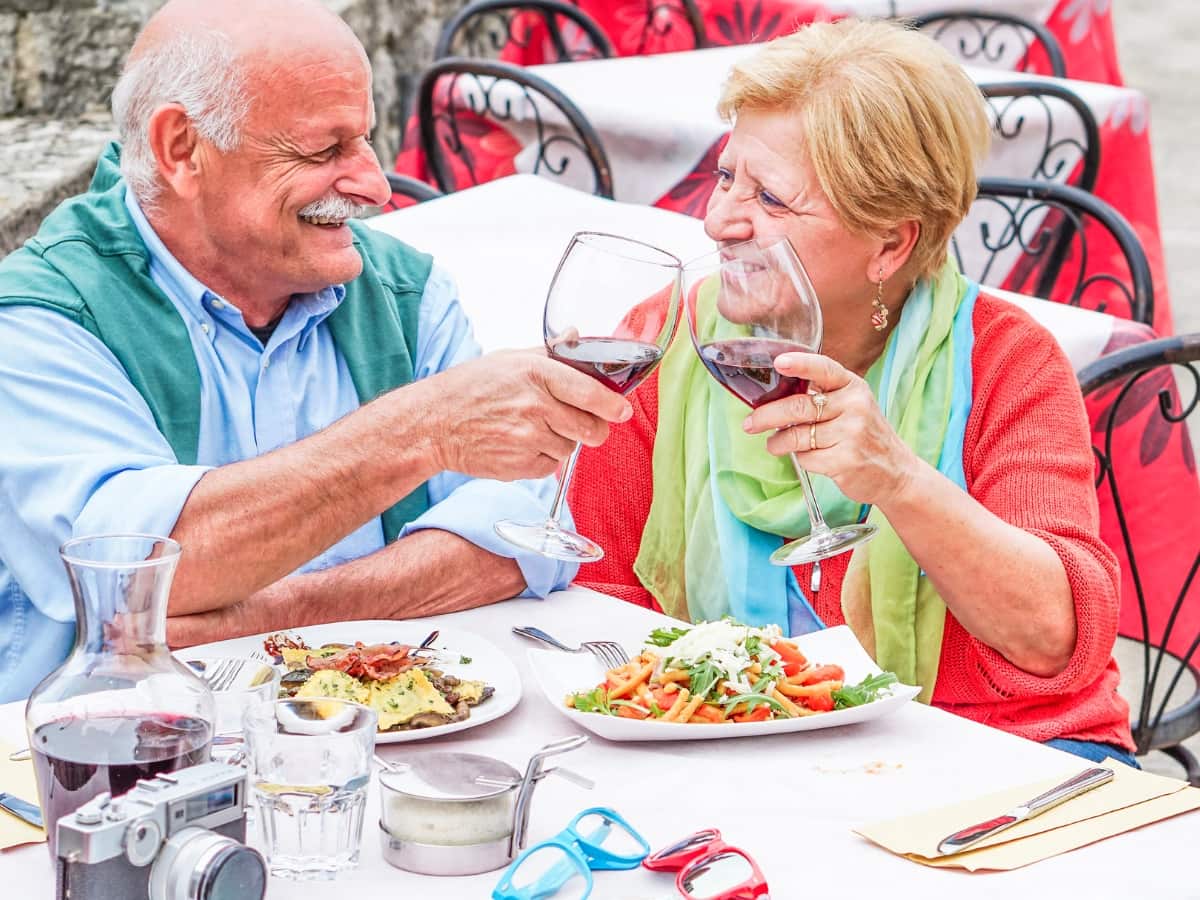 Getting the Roman Wine bar vibe

The Jewish Ghetto for Food & Culture

The whole of Rome is teeming with history and culture; yet, even so, exploring the central Roman district of the Jewish Ghetto is something rare and special. The Roman Jewish Ghetto was established in 1555.

Today, it’s a bustling and lively district with kosher restaurants that provide delicious eats as well as strong links to the history of this part of Rome. The food you eat in the Jewish Ghetto will also indicate an unmistakable influence on what we’ve come to think as Italian food. For a delicious meal at a wonderful restaurant that insists on reflecting the seasons, Nonna Betta on Portico d’Ottavia is hugely worthwhile. The fried artichokes are out of this world. 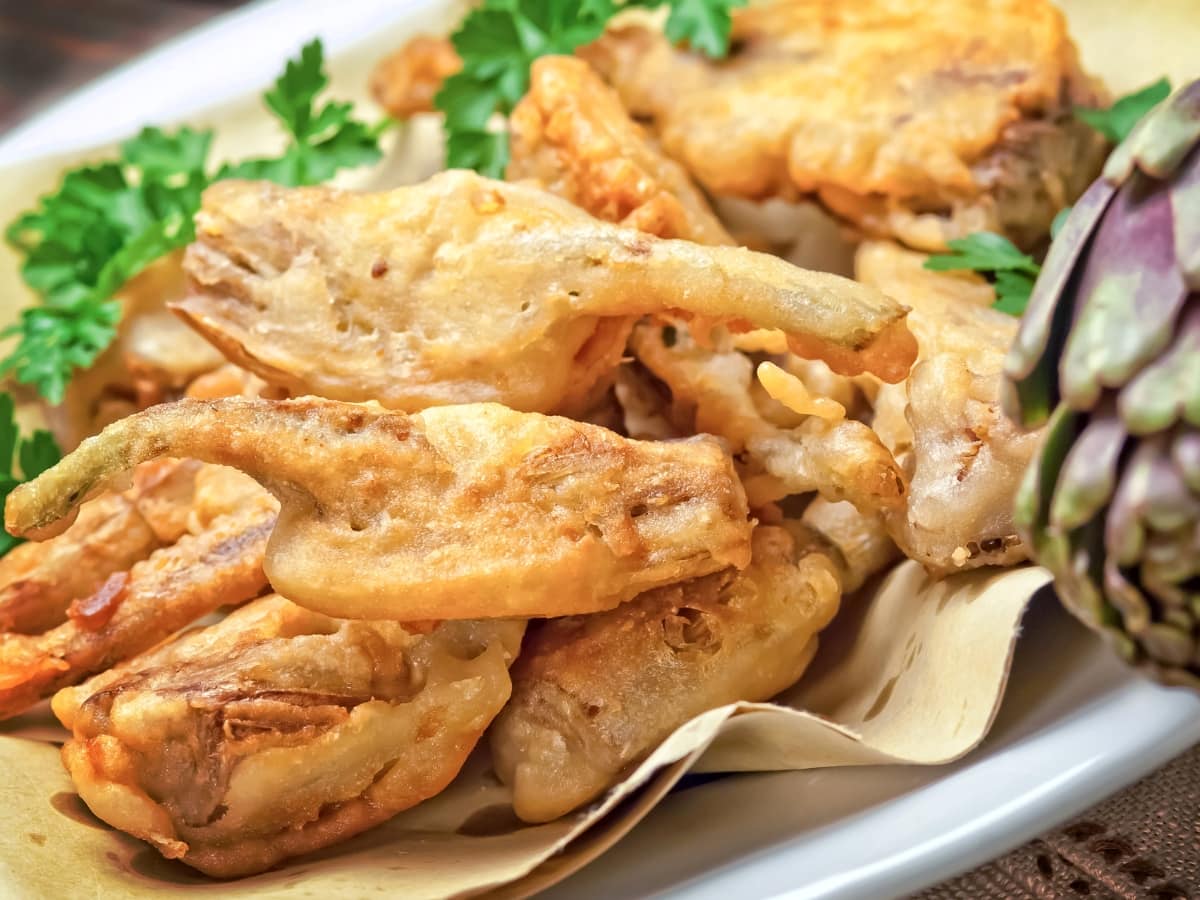 Fried artichokes are a speciality here

Testaccio, the Bastion of Roman Cuisine

Testaccio, in ancient times, was the location of the Emporium port where most of Rome’s supplies were brought into the city. Huge terracotta vats, called amphorae, of olive oil, grain, and other food necessities passed through here.

Today, Testaccio is a foodie’s finest dream. Reflective of the district’s past, you’ll find rustic, authentic cooking here, especially at Flavio al Velavevodetto. Opened in 2009, this restaurant is considered an institution already.

Then, if it’s a pizza you’re looking for, and come on, who isn’t, head to Da Remo. The loud, fun atmosphere and gorgeous scents wafting from the kitchen will immediately let you know that you’re in pizza heaven. Wafer thin, with just the right amount of toppings to choose from, Da Remo’s pizzas regularly make top 10 lists in travel guides. Top tip: Da Remo doesn’t take reservations so prepare for a wait at busy times during the day and night. 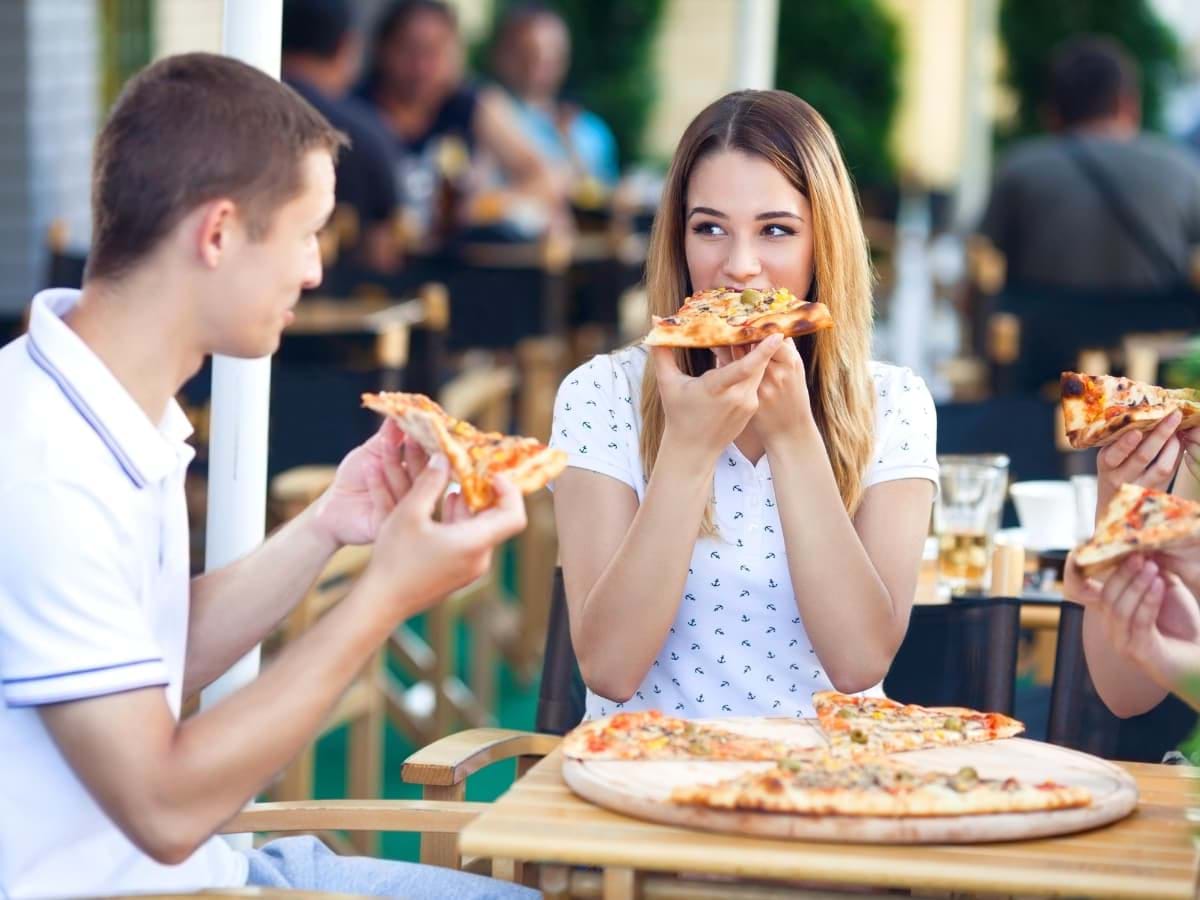 If you want to get to the heart of Rome, there’s one place above all others that fits the bill and that’s Centro Storico. The narrow alleyways, cobbled roads, crumbling ruins, and wide piazzas will immediately make you feel Roman, and you’ll quickly understand why this area played such a significant role during the Renaissance.

A walk through Centro Storico is an event. The Pantheon and Piazza Navona are famous parts to the district, but wherever you walk you have boutiques, trattorias, bars, street artists and market traders to entertain you for hours. And when you start to feel hungry, you’ll find excellent meals at the outstanding restaurants dotted along the alleyways. For a sublime upmarket dining experience, make a reservation at Il San Lorenzo. You’ll be very happy you did. 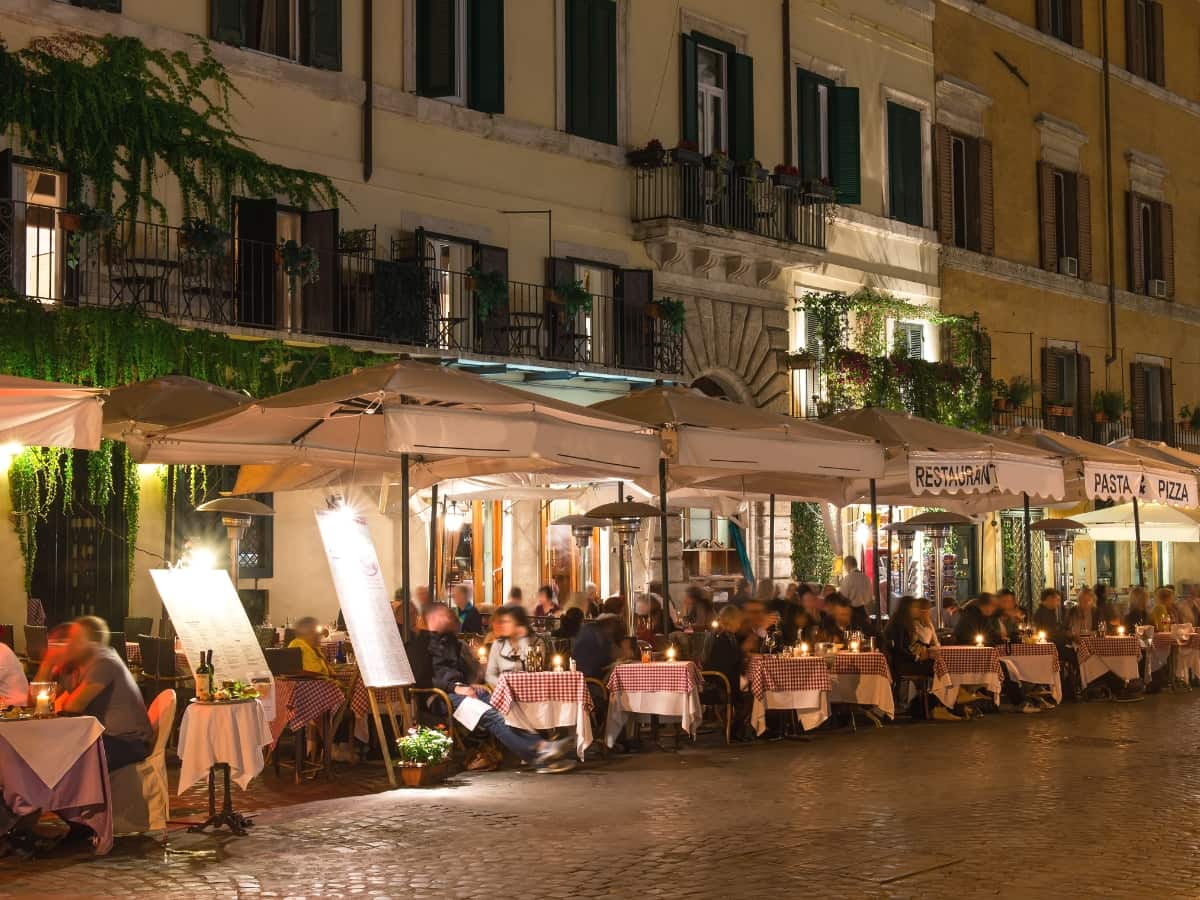