Best Towns on the Amalfi Coast

A slithering stretch of cliff-edged coastline wedged between forested hillsides and sapphire blue seas, the Amalfi Coast is much fawned-over. Not only does it send travelers weak at the knees, but it has also been given the coveted UNESCO stamp of approval, with the UN agency declaring it “an outstanding example of the Mediterranean landscape.”

Nature has been undoubtedly generous to this sliver of southern Italy, gifting it with the kind of striking vistas and gorgeous jewel-toned palette that has landscape artists reaching for their paintbrushes. Humankind hasn’t done bad here either, creating picturesque pastel-painted towns that add rather than detract from the glorious natural surroundings.

The Town of Amalfi

With breath-stealing natural beauty, towns that range from the charmingly sleepy to the disarmingly glamorous, and some of the finest straight-from-the-Med seafood ever to make it on to the plate, the Amalfi Coast doesn’t need to rest on its historic laurels. Yet it would be a shame to visit without so much as dipping a toe into its fascinating and mostly underappreciated past. The best town in which to wind back the clock is Amalfi itself, which was once – along with Venice, Pisa and Genoa – one of Italy’s four powerful maritime republics. Now a small seaside resort town crammed with attractive sun-dappled piazzas, cafés and shop-lined streets, it can be hard to imagine Amalfi as the major power it once was.

The town’s peak period lasted from the 7th to 10th centuries, and though its fall from grace began in the 12th century when it was taken over by the Pisans, the final blow came in the form of an earthquake and tsunami in 1343, which saw the majority of the town destroyed. Among the few rare remaining relics from its wealthy trading heyday are the 11th-century Byzantine bronze doors that front the town’s cathedral, the Duomo di Sant'Andrea, and the adjoining 13th-century cloister, Chiostro del Paradiso. 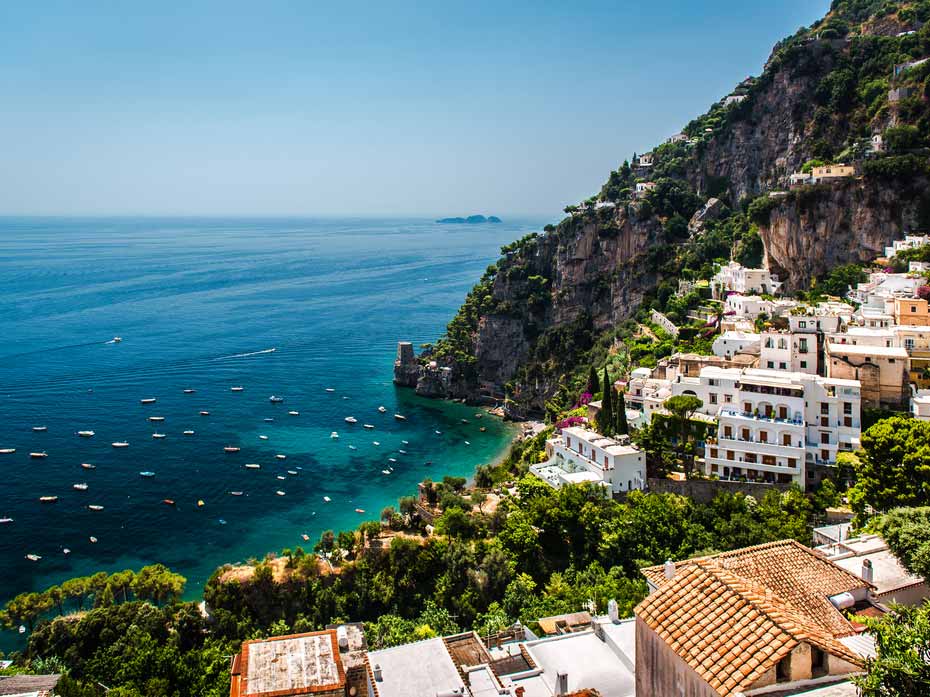 The Town of Positano

There is one town on the Amalfi Coast so relentlessly photogenic that visitors here often find themselves with their finger constantly poised on the shutter button, and that is former fishing village turned glamorous getaway Positano. If you can bear to put the camera away you’ll do more justice to this life-affirmingly beautiful hillside town, whose tumbling assortment of pastel-hued houses look toy-sized against the rearing olive and lemon-grove carpeted mountains and the vast twinkling sea. You would be better off marching yourself off down the steep, snaking arm’s-width alleys that wind down to Positano’s seafront, which are loaded with fashion-forward boutiques, smart seafood restaurants and café terraces that encouraging lingering over dreamy Mediterranean views.

Join our Amalfi Coast tours from Rome or among our Naples tours, and not only will you get to see Amalfi and Positano, but you will also be taken to a slumbering under-the-radar Amalfi town, far off the beaten tourist track high up in the mountains overlooking the Med. Here, you will get to sample freshly made mozzarella so silky and delicately flavored, it puts the rubbery, store-bought stuff to shame. Visit our Amalfi Tours page for a full list of the tours.

Top Experience: Breakfast at the Vatican

Tips for Families Visiting the Louvre