With pretty piazzas, ancient archaeological remains, art-laden churches, and the treasure-stuffed Vatican to its name, Rome is a city ripe for picture-taking and a dream backdrop for hobbyist photographers and Instagrammers alike. Even among Rome’s fabulous and fetching collection of sights, one particularly photogenic landmark seems to attract most adoration from snap-happy travelers: the Spanish Steps. Many who perch and pose on this storied staircase know little of its history. Not familiar with the story behind this much-loved monument? Never fear, we’ve got you covered. 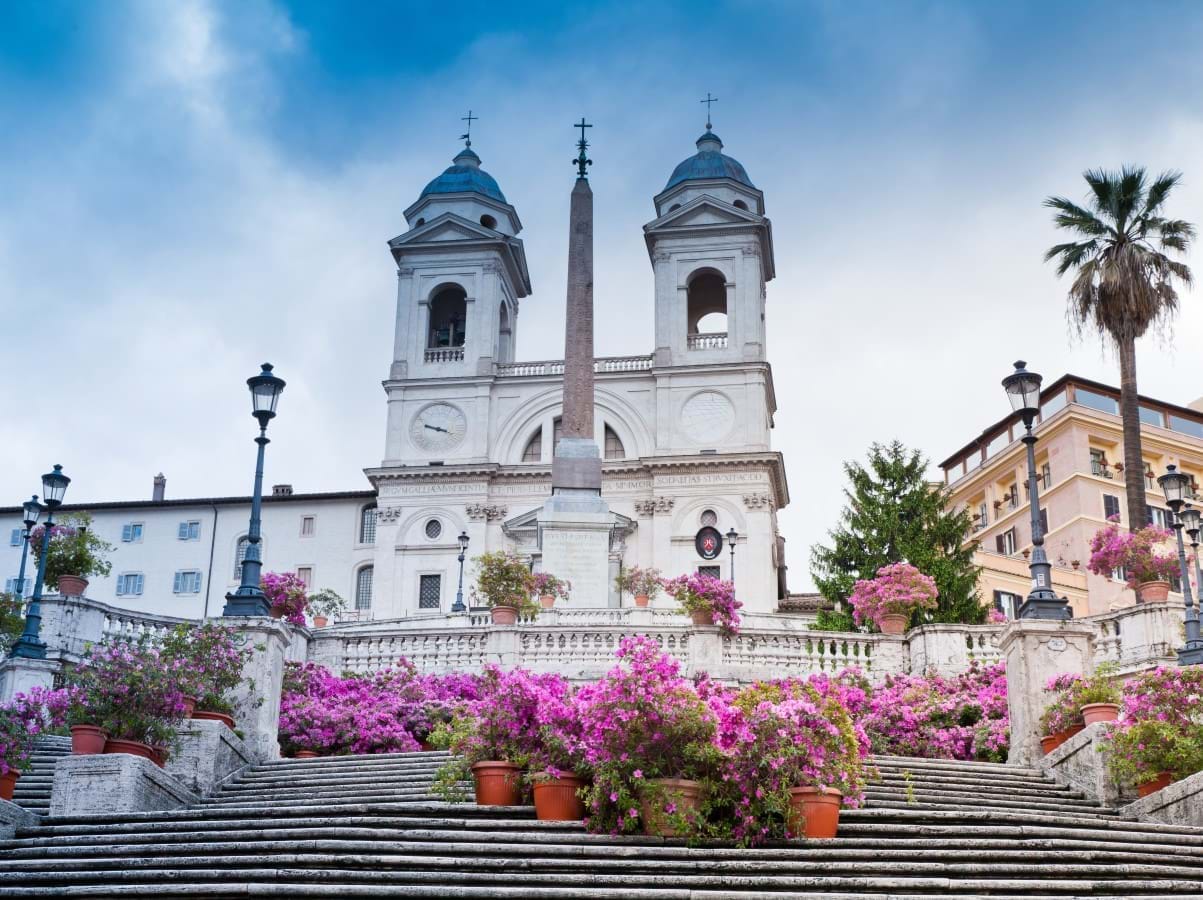 The Spanish Steps in Rome, Italy

The Story of the Spanish Steps

Though their somewhat misleading name may lead you to assume otherwise, the Spanish Steps were not actually financed by the Spanish, but rather by a French diplomat by the name of Étienne Gueffier. The ‘Spanish’ part of the name refers instead to the Spanish Embassy to the Holy See, which would have been located on Piazza di Spagna (literally ‘Spanish Square’) at the base of the monument.

After they were completed in 1725, the steps quickly gained a reputation for being a prime people-watching spot because they attracted a crowd. And not just any gathering, but a particularly good-looking crowd. Why did such a beautiful bunch congregate here? It's simple really. A high concentration of artists and later photographers, who were themselves drawn to the attractive monument, served as bait for wannabe models. In the mid-20th century, A-listers Audrey Hepburn and Gregory Peck spurred on a stampede of American travelers to the site, after the steps were used as a backdrop in the 1953 hit rom-com, Roman Holiday.

Of course, decades of heavy footfall took their toll on the monument. A huge restoration project in 2015 and 2016 saw the Spanish Steps scrubbed clean and returned to their former splendor. These days, they are looking as spick and span as they ever have.

What to See at the Spanish Steps

Start by admiring the steps themselves: the giant sumptuous stone 138-step staircase fans out from Piazza di Spagna up to the Trinità dei Monti church. Though the steps are the undisputed centerpiece of the upscale Tridente part of Rome, they are in good company, with a handful or so of fascinating attractions surrounding them. At the base lies the Fontana della Barcaccia, a fountain featuring a half-shrunk stone ship sculpted by Pietro Bernini. Pietro was the father of the leading Baroque sculptor Gian Lorenzo Bernini, whose intricate works can be seen all across Rome and include the vast St. Peter’s Piazza and magnificent bronze baldachin in St. Peter’s Basilica.

Standing at the top of the Spanish Steps is the 16th-century Trinità dei Monti church, which was built using French funds, having been commissioned by King Louis XII. It holds one of Rome’s most prized masterpieces, Deposizione by Daniele da Volterra, an Italian Mannerist master who, despite creating some excellent works of his own, is more commonly remembered for his inextricable link to Michelangelo. Da Volterra, having been hired to paint over the private parts of the figures in Michelangelo's Sistine Chapel altar wall fresco, the Last Judgment, earned the unfortunate nickname of ‘Il Braghettone’, meaning ‘the breeches-maker.’

About half-way up the Spanish Steps to the side sits a literary landmark, the Keats-Shelley House. This one-time residence, now a museum, was where the 25-year-old English romantic poet John Keats came, gravely ill from tuberculosis and fleeing the cruel British winter. Unfortunately, the warm Italian weather wasn’t enough to revive his health and Keats passed away here in this very house.

Join our expert local guides on one of our many Rome tours. Our Best of Rome Walking Tour and the Rome In a Day Tour will bring all your favorite Roman sights to life. Discover the eternal city lit up on our Rome Night Walking Tour with an evening aperitivo.