Raphael, who along with Michelangelo and Leonardo da Vinci was part of the trilogy of High Renaissance masters, was commissioned by Pope Julius II to paint the Pope’s private apartments when he was only 25 and relatively unknown in the art world. The project was to occupy much of his working life and wasn’t long finished when he died in 1520, aged 37. 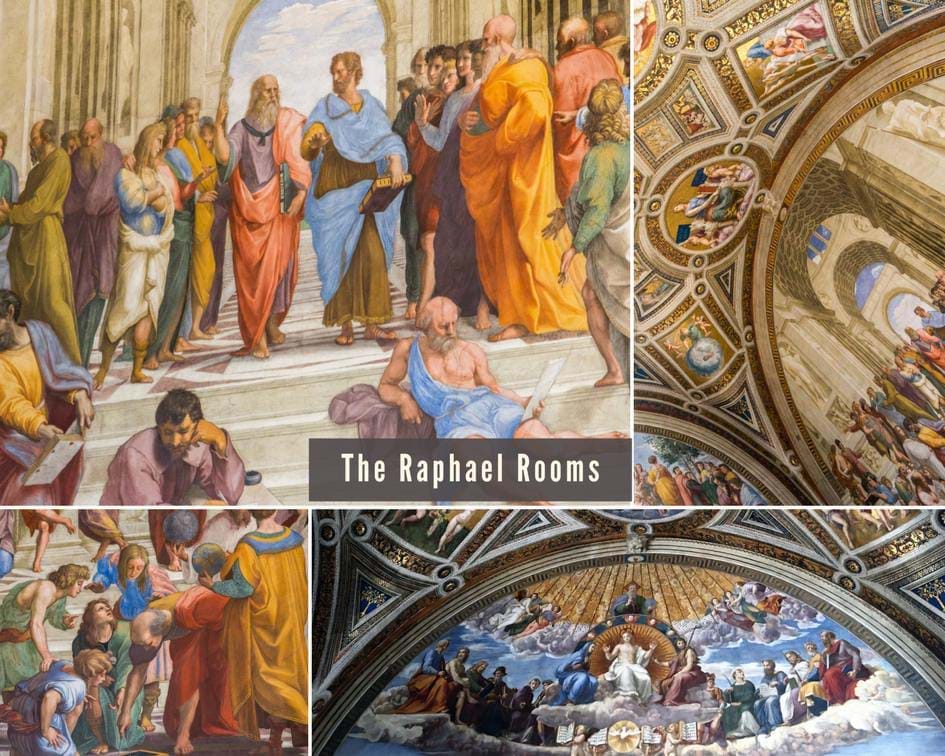 The School of Athens

Raphael himself painted only two of the rooms in full, with some pieces in other rooms done by him and the rest completed by his students in his workshop to his design. His masterpiece was the Sala della Segnatura where he painted perhaps his most loved work, the La Scuola d’Atene, 'The School of Athens.' In it, Plato and Aristotle are discussing philosophy surrounded by eager students. If you look carefully you’ll see that Plato is, in fact, Leonardo da Vinci, Eulicide in the lower right is Donato Bramante, the single figure on the steps is Michelangelo, and in the bottom right-hand corner, Raphael painted himself. Also in this room is the beautiful La Disputa del Sacramento, ‘Disputation on the Sacrament.’

The room you walk through after that, the third room as you come through, is the Stanza d’Elidoro, the second room of the set painted by Raphael. It’s much darker than the Sala della Segnatura and is focused mostly on Raphael’s patron and his predecessors, with scenes depicting the victories and virtues of various Popes, including Julius II.

The Fire in Borgo

One of the most interesting rooms, after Stanza d’Elidoro, is one that wasn’t painted by Raphael at all. The fourth room as you walk through the museums is Stanza dell’Incendio del Borgo. 'The Fire in Borgo' is an incredibly lively work, painted in Raphael’s workshop by his students (to his design) on the roof, is a work by Raphael’s own master Perugino, a lot of whose work you will see if you travel to Umbria.

Considering how short Raphael’s career was, it is astounding how much of an impact he made on Italy’s most important age of art. When he died he was buried in the Pantheon, a fitting tribute for a groundbreaking artist. If you see only one thing in the Vatican Museums besides from the Sistine Chapel, make sure it’s the Raphael Rooms.

Could you walk the seven hills of Rome?