Rome is something to behold from just about any angle. However, as is so often the case, the best view of Rome is a bird's eye view– preferably at sunset. But where should you set your romantic Italian Kodak moment? Here's a run-down of our top 5 views of Rome

Watching the sunset over Rome while dangling your legs over the edge of a wall in the Gianicolo is one of the most relaxed and rewarding ways to end a day in Rome. The Gianicolo, or Janiculum Hill, is the hill in Rome that affords the best view of the city. Situated just outside the Ancient City west of the Tiber, the hill is technically not one of the city's famous seven hills but who cares when you have such a stunning and peaceful view all to yourself. 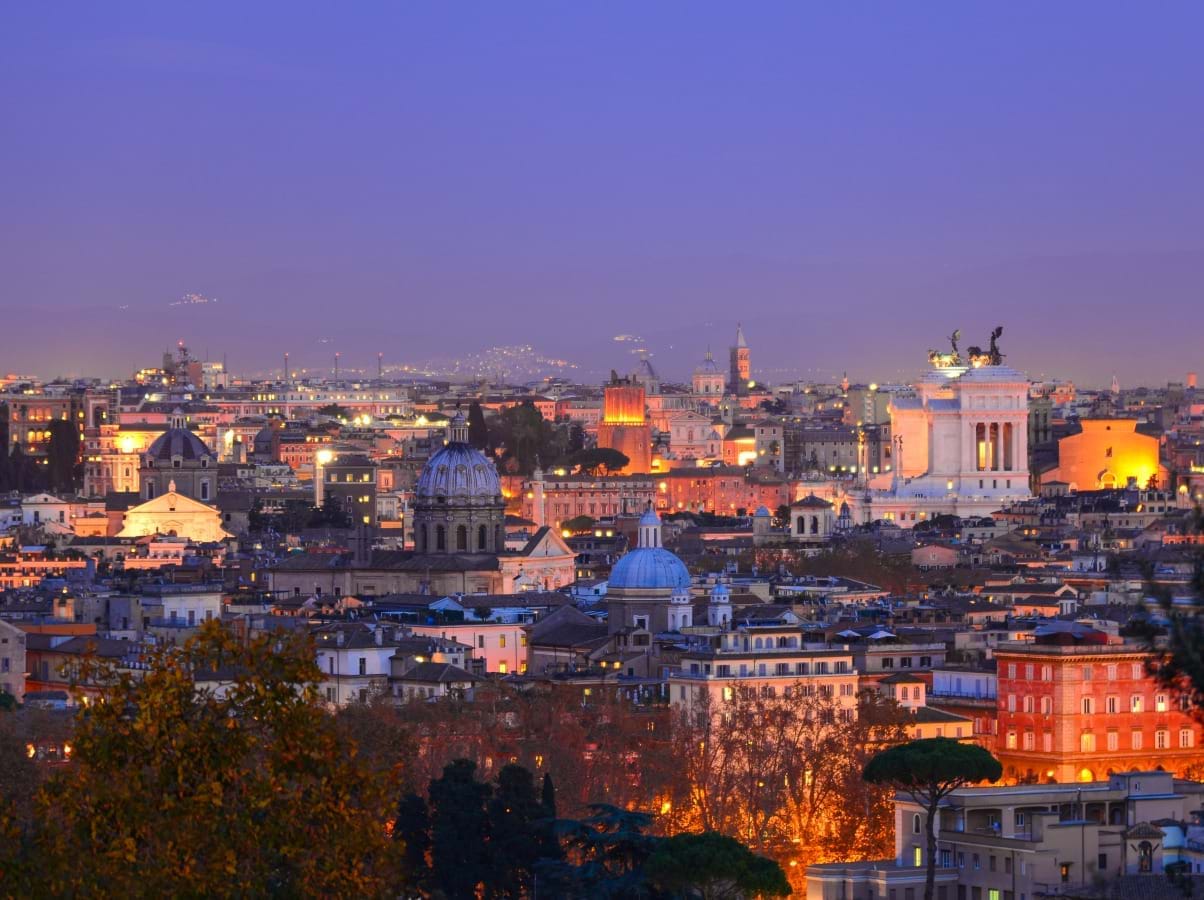 We visit Gianicolo on our Rome by Night tour, which offers aperitivo (a light aperitif and wine) before embarking on a tour of the best sights of Rome by night, including the Colosseum, Trevi Fountain, and St. Peter's Square. After a short walking tour, we take the bus up to Gianicolo where your guide will point out all the best sights of the city below you.

Perhaps the most memorable view in Rome is from the Campidoglio, The Capitoline Hill. With views over the entire Roman Forum, the Campidoglio is a stunning place any time of day, but even more so after the Roman Forum closes, and all is quiet. Since the city's foundation 2,500 years ago Capitoline Hill has been the political center of the city, and for a long time the entire Roman Empire. In its day it has held the most important temples, housed the most important citizens and acted as the home of parliament. An outdoor space designed by Michelangelo, the hill is now home to many Medieval and Renaissance palaces and the Capitoline Museums. 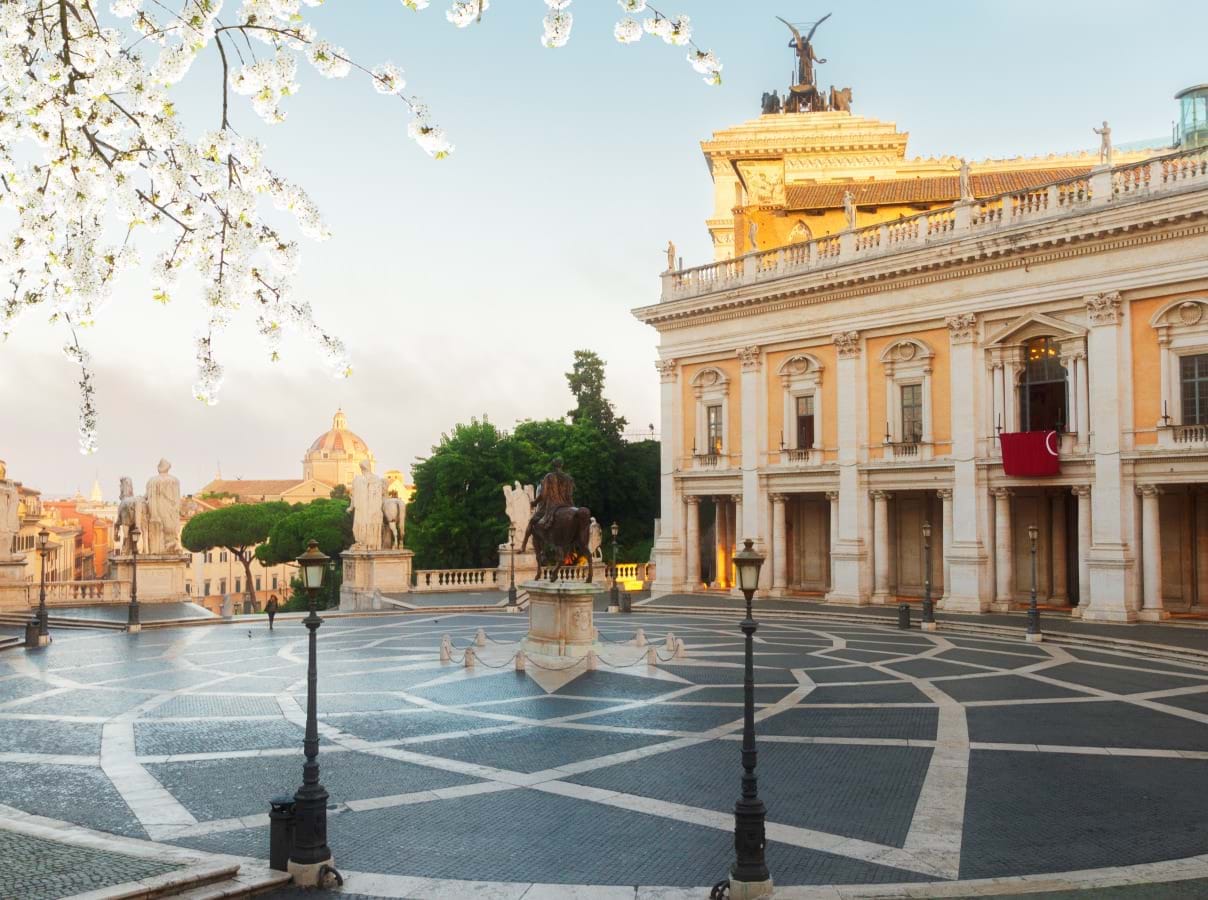 Most Sacred – The Cupola in St. Peter's Basilica

After the steep climb up the stairs, the view of Rome from the Cupola (or dome) is a sight for sore eyes. The vast, open space of St. Peter's Square is flanked on every side by immaculate stonework in grey, white, and terracotta.
For those that battled all 312 steps on their way up, there is a massive sense of achievement in earning this snap – a worthy addition to their photo albums. Then again, even those that took the elevator part of the way had to tackle some of the stairs, but getting that bit closer to Michelangelo's masterpiece on the inside of the dome certainly makes the journey a little easier. 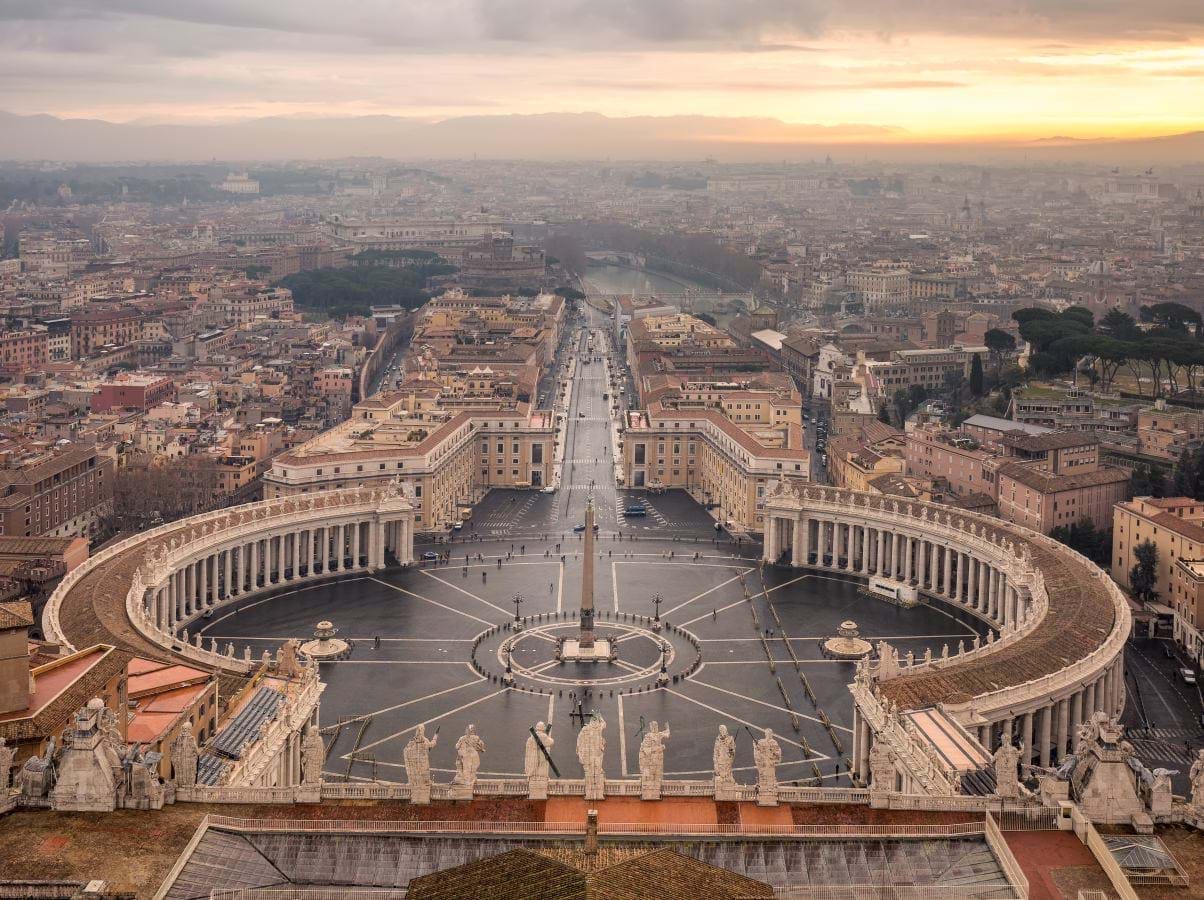 The Cupola can be visited independently after any of our Vatican tours. Access is €6 for those willing to take the stairs the whole way up and €7 to take the elevator part of the way. Follow the signs from the entrance of the Basilica directing you to the right side of the portico.

Giardino degli Aranci, also known as The Garden of Oranges is one of the top spots from which to view Rome. Tucked in behind the Basilica of Santa Sabina and beside the Piazza Pietro d'Illiria, from this elevated and tranquil place, visitors witness a beautiful view of Rome's terracotta roofs, the grand curves of a dozen Basilicas puncturing the skyline. 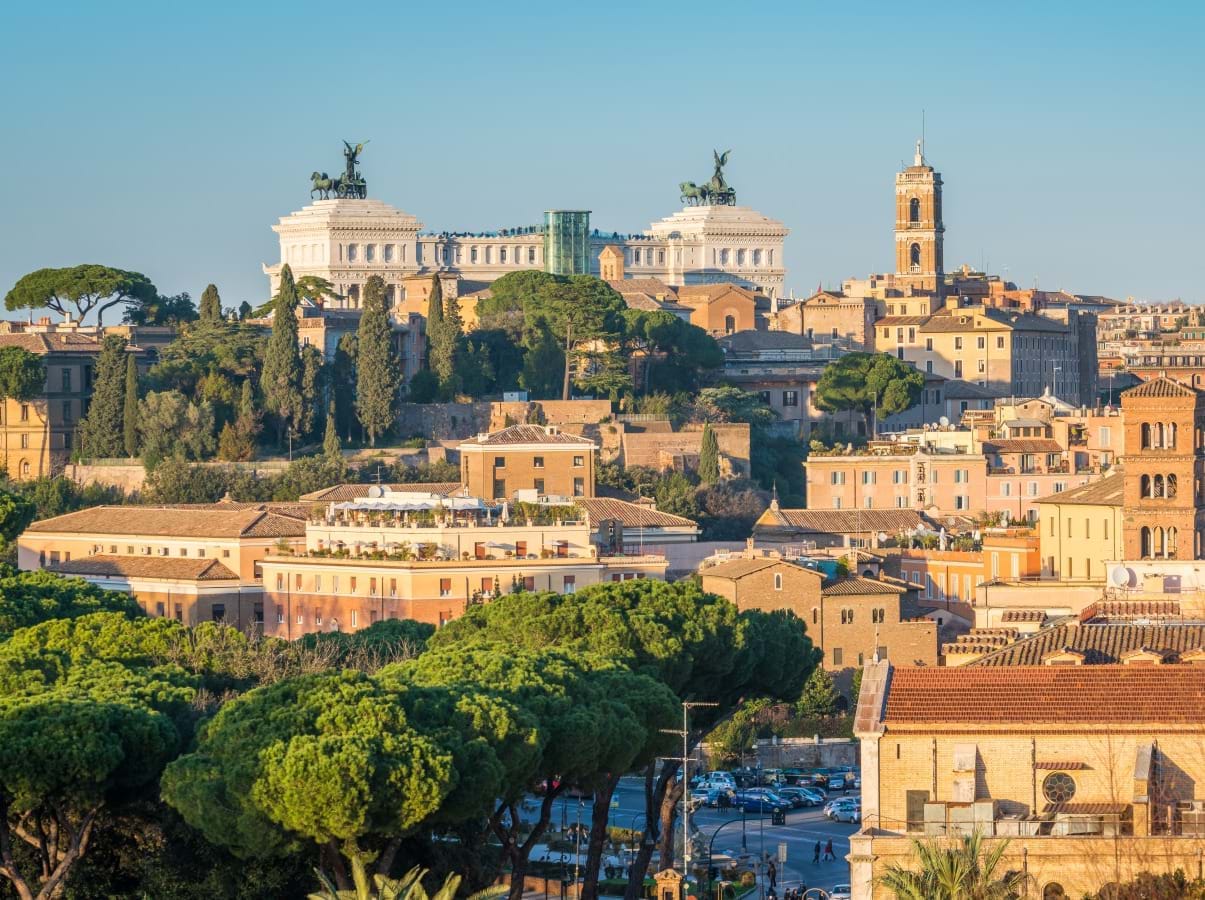 The Giardino degli Aranci area is also a nice spot to visit for Giacomo della Porta's fountain in the Piazza; the remains of the Savelli Castle walls and of course the beautiful orange trees that populate the garden.

You don't get much older or more historic than the Palatine Hill. The centermost of the seven hills of Rome, the Palatine Hill has pride of place overlooking the Roman Forum, Circus Maximus and of course, the Colosseum. This is the spot where Rome was founded – of course, it's included in our top views of Rome list! 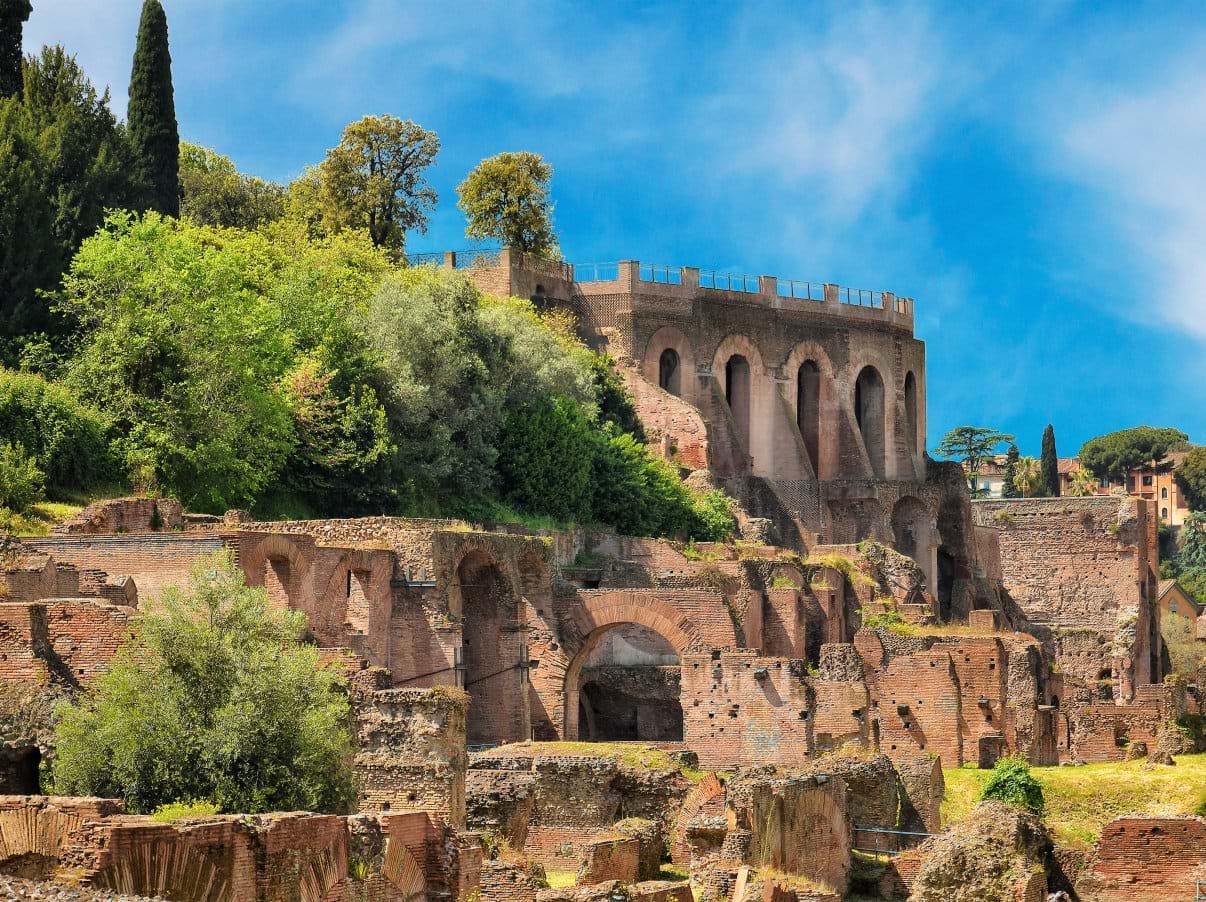 You can visit Palatine Hill as part of our Skip the Line Colosseum and Ancient Rome tour or our Colosseum Underground Tour.