On our tours of Rome, we pass lots of fountains but one rules supreme. Only one attracts 1200 people per hour to ceremoniously deposit coins in its shimmering waters. Despite the crowds, the atmosphere is usually pleasant and the noise of the people mixed with the splashing water has a surprising meditative quality.  This got us thinking about what is it about the fountain that attracts people. Ask most people why they are there and most of them will tell you that they just had to visit it. Are these people secret fountain connoisseurs? We think not.

The truth is that the Trevi Fountain leaves us many messages about life and this is what makes it so alluring.

Trevi Fountain did not always look so stunning but it did have a very important purpose. Back in 19BC, it was little more than a trickle of water at one of the terminal points of the main aqueduct in Rome. At the time there were 450,000 people in the city who relied on that trickle for clean water.  During the medieval period, when malaria ravaged the hot low lying areas between the hills, it was a life-saver.

Historical reports from the time say that there was nothing unique about it. It was yet to be referred to as a fountain. Descriptions record it as a small rectangular structure with three spouts pouring water into stone basins.

In 1453 it was granted its first makeover. The basins were reformed into a stone trough and the water spouted out of lion heads. It had now achieved the class of fountain, just like the other 2000 water features in Rome. 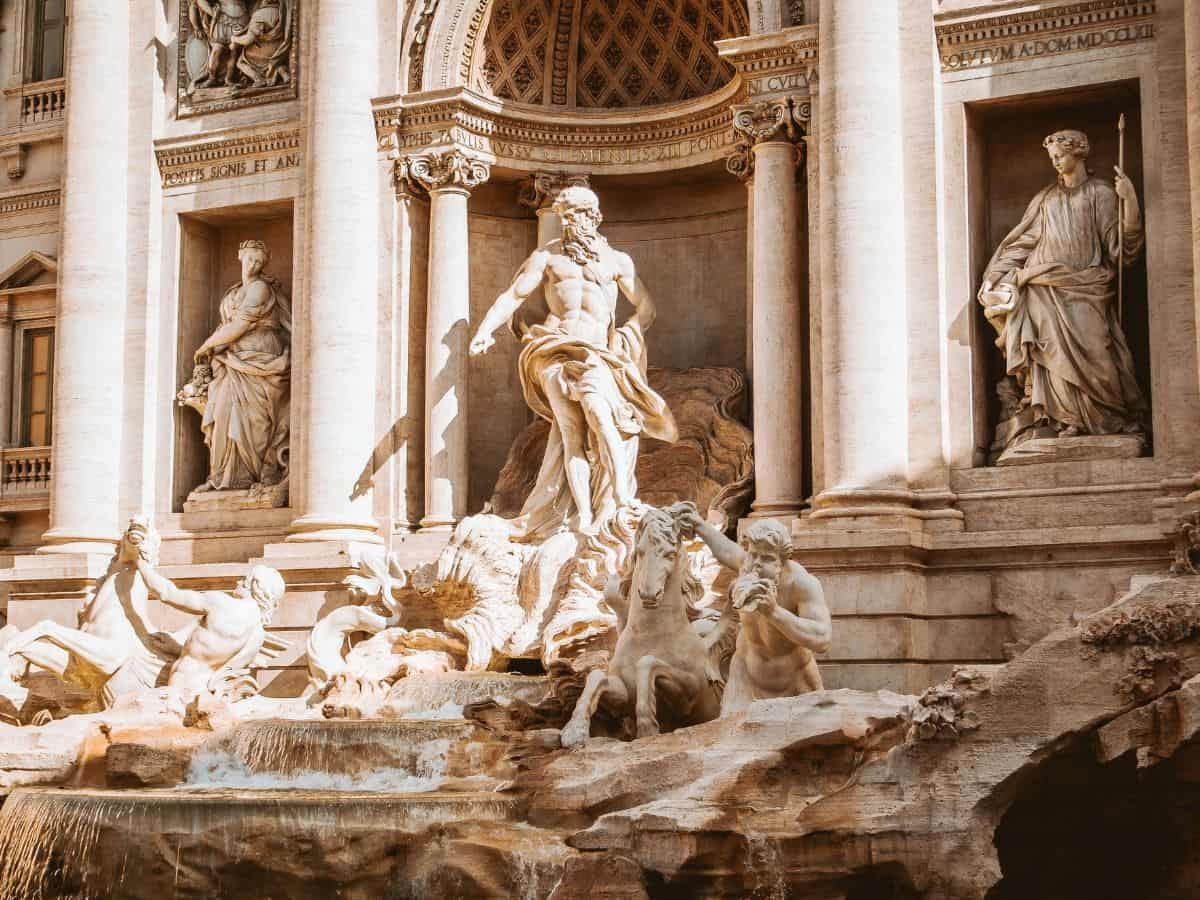 2. Have a Good Story

The Trevi Fountain is steeped in stories. Water sources, because of their life-giving properties, tend to become saturated with local folklore. Everywhere in the world, rivers and streams were viewed as gods or had spirits residing in them which could be petitioned or bargained with. This is where wishing wells and the practice of throwing coins into water originated from.

Rome was no different in this respect. It did have its own watery gods. Oceanus, the central figure in the Trevi Fountain, was the father god of the many water spirits in the Roman religion.

If that was not enough, the aqueduct which fed Trevi in the mists of time was the Aqua Virga. This was named after the young girl who saved the city by guiding weary Roman soldiers to the freshwater spring that was its source.

However, the custom that we know today of throwing coins in the new fountain was popularised in the 19th century by Wolfgang Helbig, a German dealer in Roman antiquities known for throwing wild parties which ended up at the Trevi Fountain by night. At the time, Rome was the main destination for well-heeled travelers. Many of them returned with stories of these parties and the coin throwing custom which they had witnessed.

While our guides continue to argue over the origin of the custom, it evolved into:

3. The third coin promises a return to Rome

One thing everyone agrees on, your back must be facing the fountain and the coin must go from your right hand over your left shoulder. 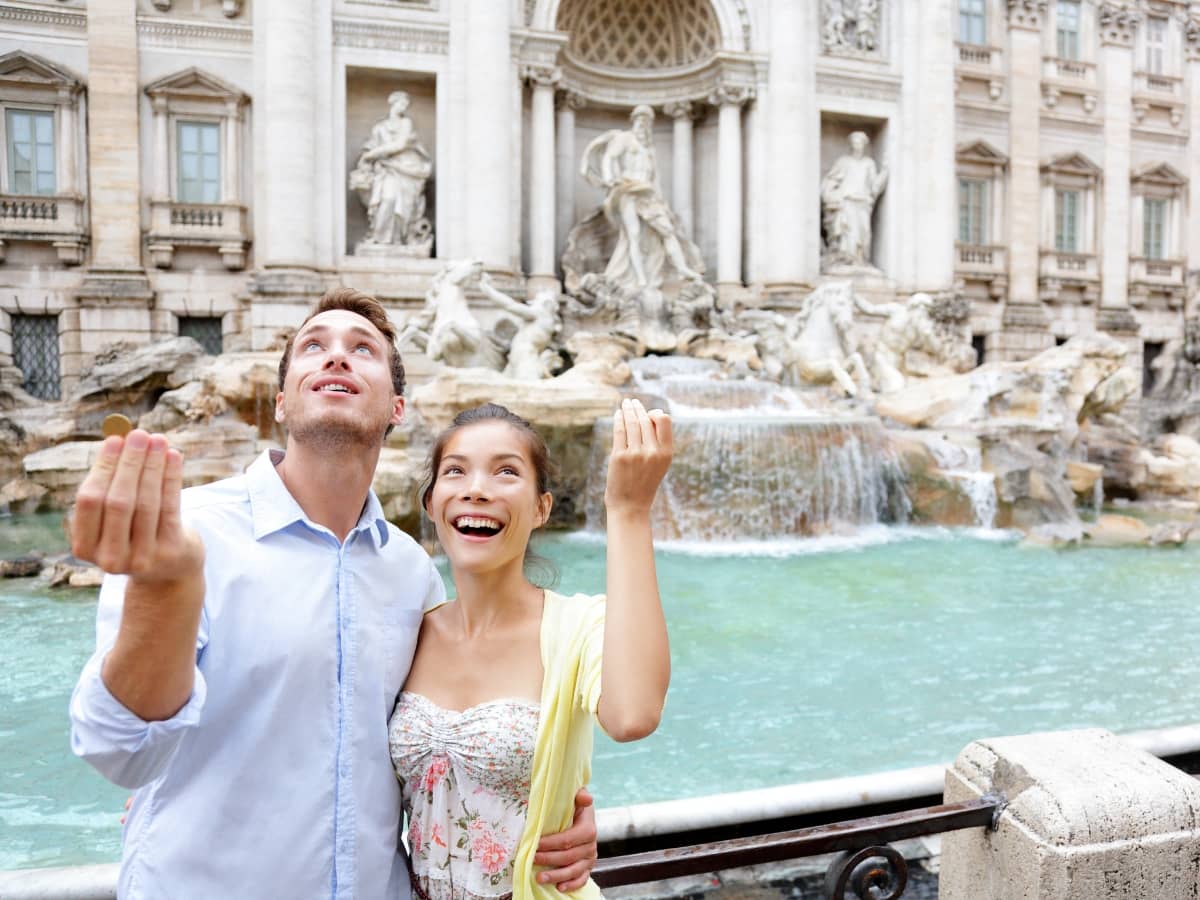 The Trevi Fountain was completely transformed in 1730 when Pope Clemens XII announced a competition for an architect to design a new appearance for it.

Galilei was from Florence, and this provoked a massive outcry from the patriotic Roman public. They wanted a local citizen to work on such a Roman symbol as the Trevi Fountain. And so Nicola Salvi won the commission to create the elaborate Trevi Fountain which we see today. It was his design which contrasts the blue cascading waters and white travertine statues to offer a glimpse of the Mediterranean in the city.

So you never know until you try.

The Trevi Fountain ensured its immortality in the 20th century by acting as the backdrop for a number of romantic movies. This fountain of love in Rome is immortalized in, among others, Roman Holiday, with Audrey Hepburn, and in La Dolce Vita, when Anita Ekberg wades into the fountain’s water fully clothed - and into cinematic legend for eternity.

In recent years, the Trevi Fountain has made more of a name for itself at night as a charity organization called Caritas collect the coins. The money, which averages around $3,400 a day is used in a food distribution program to ensure Rome’s poorer inhabitants don’t go without groceries. Closed circuit cameras ensure no coins land up in the wrong pockets! 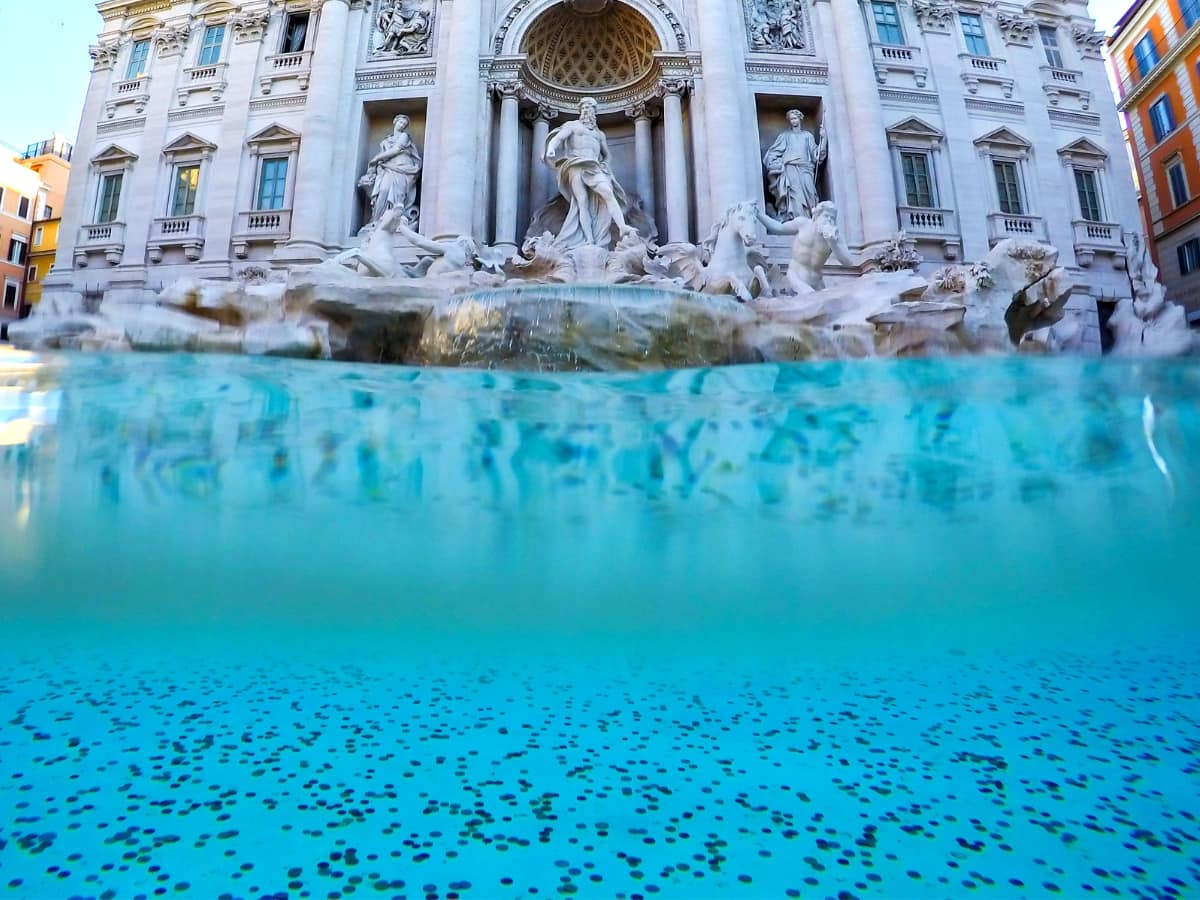 As you can see, there are a lot of reasons why the Trevi Fountain connects with so many people. It has an ancient history, strange customs and some seriously impressive baroque architecture which flows down into the waters. Its location in a narrow enclosed square makes it appear even grander when you first see it.

These are all good reasons why people come here but it is more than that. People of all nationalities and ages flock here. You'll see tourists, locals, souvenir sellers, young lovers, retired couples, families and yes, even pickpockets. Like its neighbor the Spanish Steps, this is a place where people gather, and that is what it really tells us about life.

To find out more about what Rome can teach its visitors, check out our Rome tours.