Barcelona is a city that holds more than a few surprises up its artistically surreal sleeves. And one of the loveliest surprises of all to discover is its magic dancing water fountain!

When you plan your visit to Barcelona, a trip to the magic fountain of Montjuïc is a must. Not only will you be looking at a piece of Catalan history, the fountain was built for the 1929 Barcelona World Fair, but you’ll also be beguiled by the dancing water formations set to music and light choreography.

The History of Montjuïc Fountain

In 1928, a well-known landmark, called the Four Columns Monument, was destroyed in Barcelona on the orders of Dictator Miguel Primo de Rivera. This caused great anger among the Catalan community.

Carles Buigas, an architect from the Catalan region, envisioned and suggested the Fuente Mágica de Montjuic (Magic Fountain of Montjuïc) to replace the earlier monument. The timing of the 1929’s World’s Fair, and Barcelona’s role in it, added another requirement for a landmark to be built.

With only a year between the fountain’s plans being approved and the fair, many of Barcelona’s citizens felt that the Barcelona water fountain was too ambitious a project. But the fountain was completed in time, thanks to the hard work and commitment of 3,000 workers, and today is a real drawcard of, and for, the city. 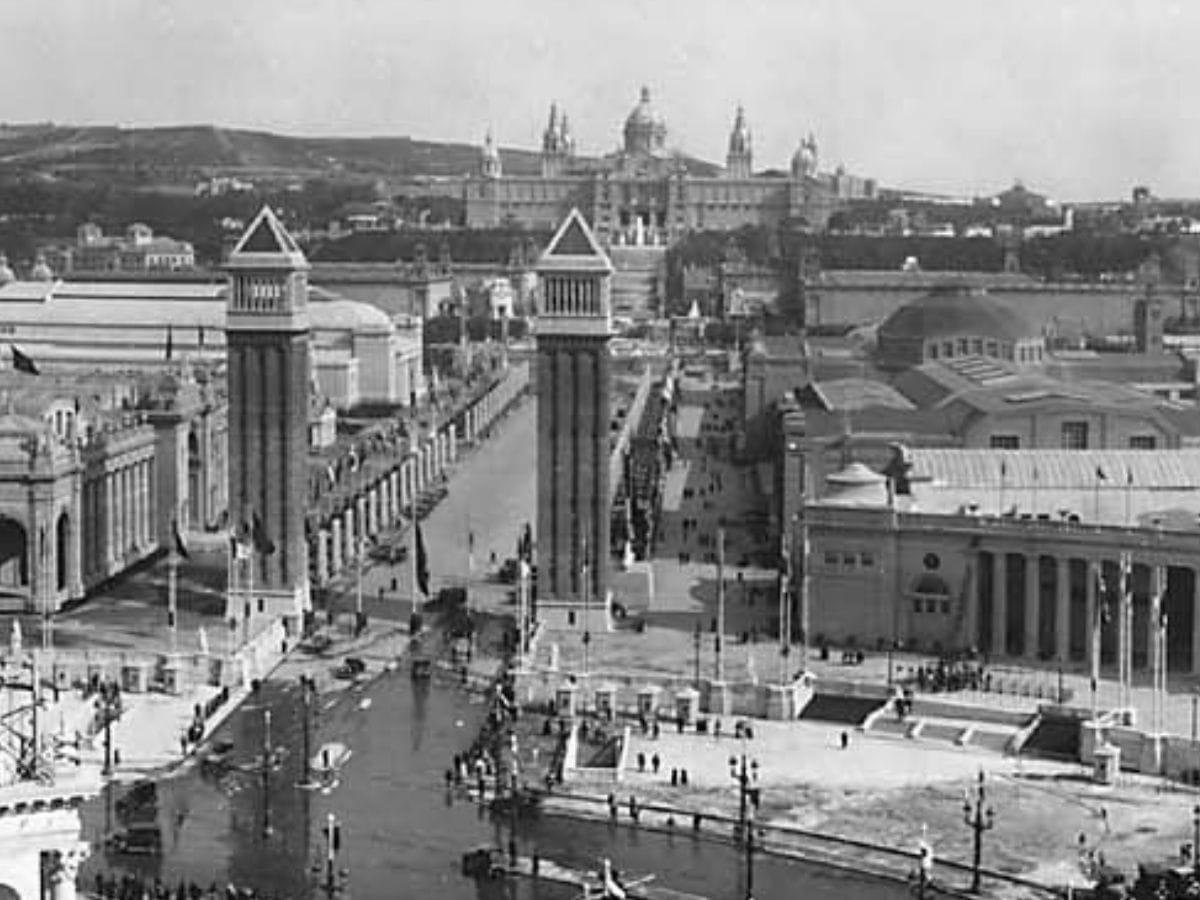 Facts and Figures of the Barcelona Water Fountain

The dancing fountains of Barcelona opened on May 29th, 1929. Closed due to severe damage during the Spanish Civil War in the late 1930s, the fountains reopened, after considerable investment in 1955. Buigas, the original architect of the Magic Fountain of Montjuïc, oversaw the repairs.

While always impressive, it wasn’t until the 1980s that light and music choreography was added to the dancing water formations. The soundtrack to the dancing fountains includes everything from Spanish classical music to pop hits and swing music.

In total, 3,620 water jets circulate 2,600 liters of water per second in the fountain’s pool, which holds 3.1 million liters of water. The highest water spout is 52 meters in the air and 4,760 lights make up the majestic fountain’s spellbinding effect.

Currently, 2.5 million visitors go to the choreographed 20-minute Magic Fountain of Montjuïc shows every year, which remain free to all.

When and Where to See the Magic Fountain of Montjuïc

The Barcelona fountains, which use recycled water to preserve the city’s drinking water, are to be found in Plaza Carles Buigas at the end of Avinguda Reina Maria Cristina. This area is located beneath the Palau Nacional (National Palace), where the National Art Museum of Catalonia is housed.

The views in this part of the city are spectacular, and you’ll be able to see from the Plaça Espanya to the slopes of Tibidabo Mountain.

You can reach the magic fountains by hopping on either the metro red line L1 or green line L3. These lines take you to metro station Espanya, which is right by Plaça Espanya; the fountains are just behind the Palace’s two Venetian towers.

Buses that will get you to the most enchanting fountains in the world include the number 13, 23, 37, 150, H12 and H16. The Bus Turistic, which stops at Plaça Espanya, MNAC and CaixaForum, is also a transport option.
The Magic Fountain of Montjuïc’s show times are 20 minutes long every Thursday to Saturday. There are 30-minute intervals between the shows which begin at 20:00. Shows run from 20:00 to 22:00 during the Summer months and from 20:00 to 21:00 during the rest of the year, but it’s always worthwhile to double check whether the fountains are closed for maintenance when you want to go. The official website for the Barcelona water fountain can be found here.

If you want to splash out on some more of Barcelona's fascinating culture after the Magic Fountains, check out our Barcelona Tours.