Shops and Sights in the City of Pompeii

The ancient city of Pompeii, before its eventual destruction, was a brilliant example of ancient Roman society. From what historians can gather, it seems like Pompeii was a highly sophisticated community - people from diverse economic backgrounds lived side by side and the town as a whole was very efficiently run. The Pompeii tours you can go on today aim to show you an insight into what life in the city was like - you can step back in time and walk around the land that time forgot. So, what shops and amenities did they have in Pompeii? 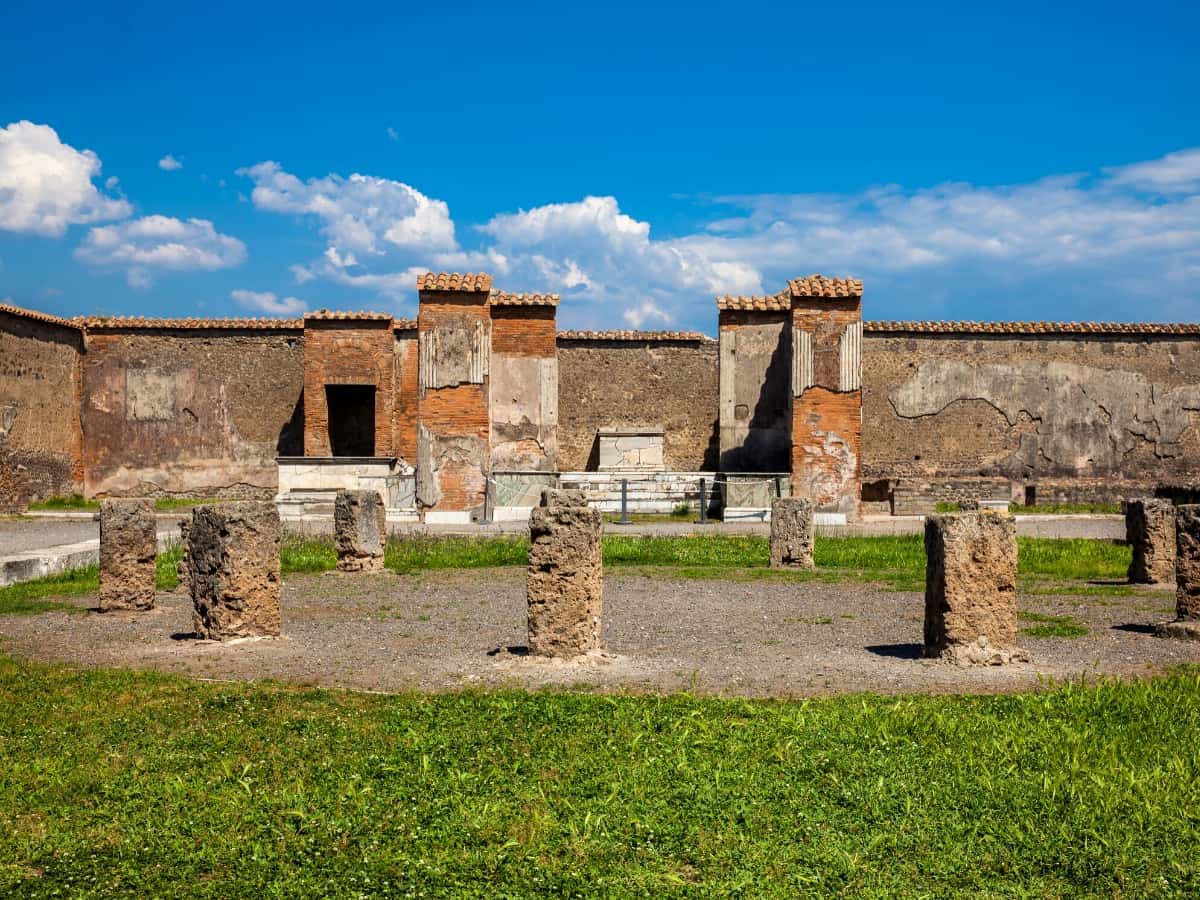 On day tours from Rome to Pompeii, visitors are spoilt for choice in terms of what to see. But the Macellum of Pompeii is simply fascinating. Located within the Forum area, it was the main market for the city. It sold meat and fish among other necessities; during excavations, archaeologists have found fish scales and animal bones in drainage troughs. Other food items - grapes, pulses, chestnuts, fruit in jars, bread and more - were found here, and you can see them now in the National Archaeological Museum in Naples.

Although the market building was badly damaged in the earthquakes that happened prior to the eruption of Mount Vesuvius, it was still an incredibly important part of daily life for the citizens of Pompeii. Walking around the Macellum now, you are retracing the footsteps of those who lived there and visited the market to stock up on provisions to feed themselves and their families. 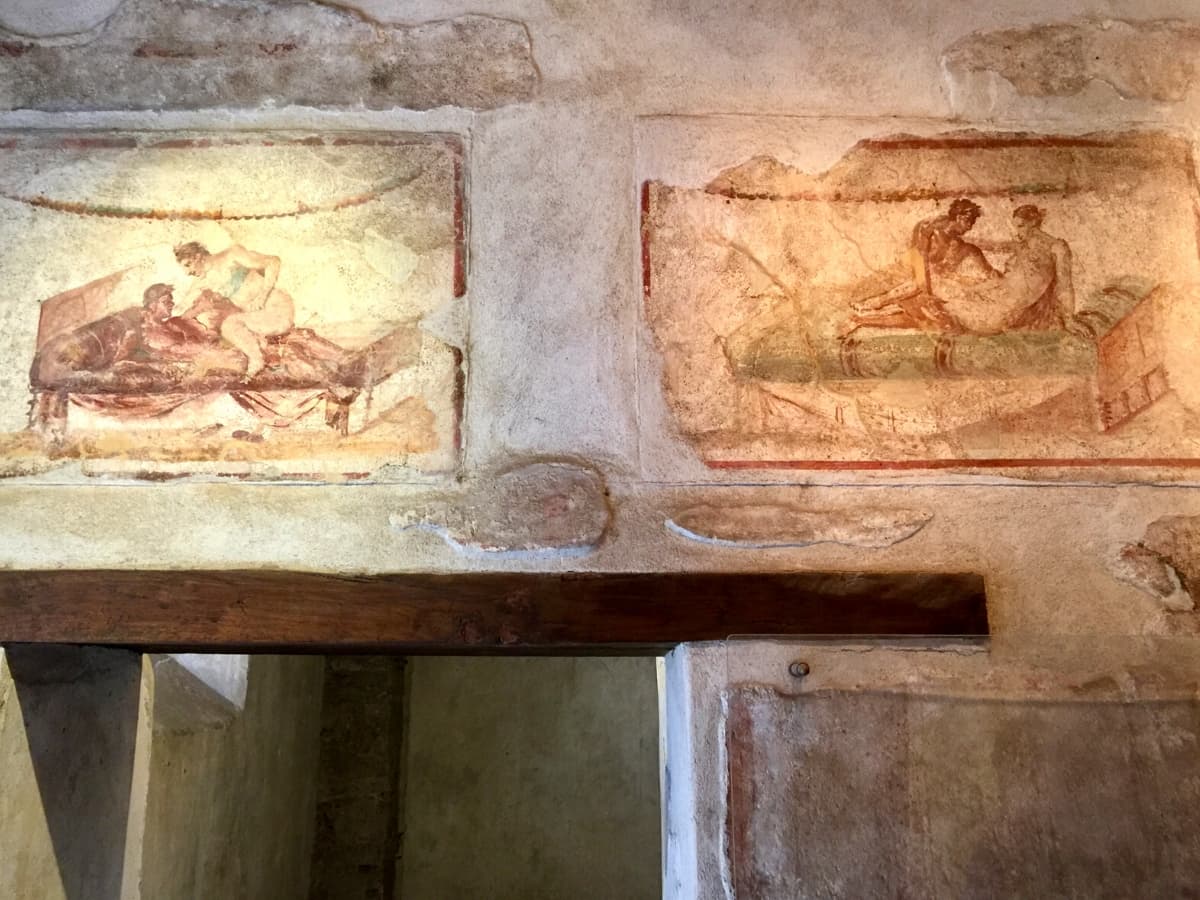 There were many brothels in Pompeii. However, Lupanar Grande is, as the name suggests, the largest one that still stands. Tours to Pompeii from Rome will walk you through Pompeii, and this is one of the most-visited buildings in the city for many reasons. It is novel, to many, to see a brothel of any kind let alone an ancient one - and this one is truly fascinating. There are 10 rooms, each with a brick platform that would once have been topped with a mattress of some sort to serve as a bed for the workers and clients of the brothel. 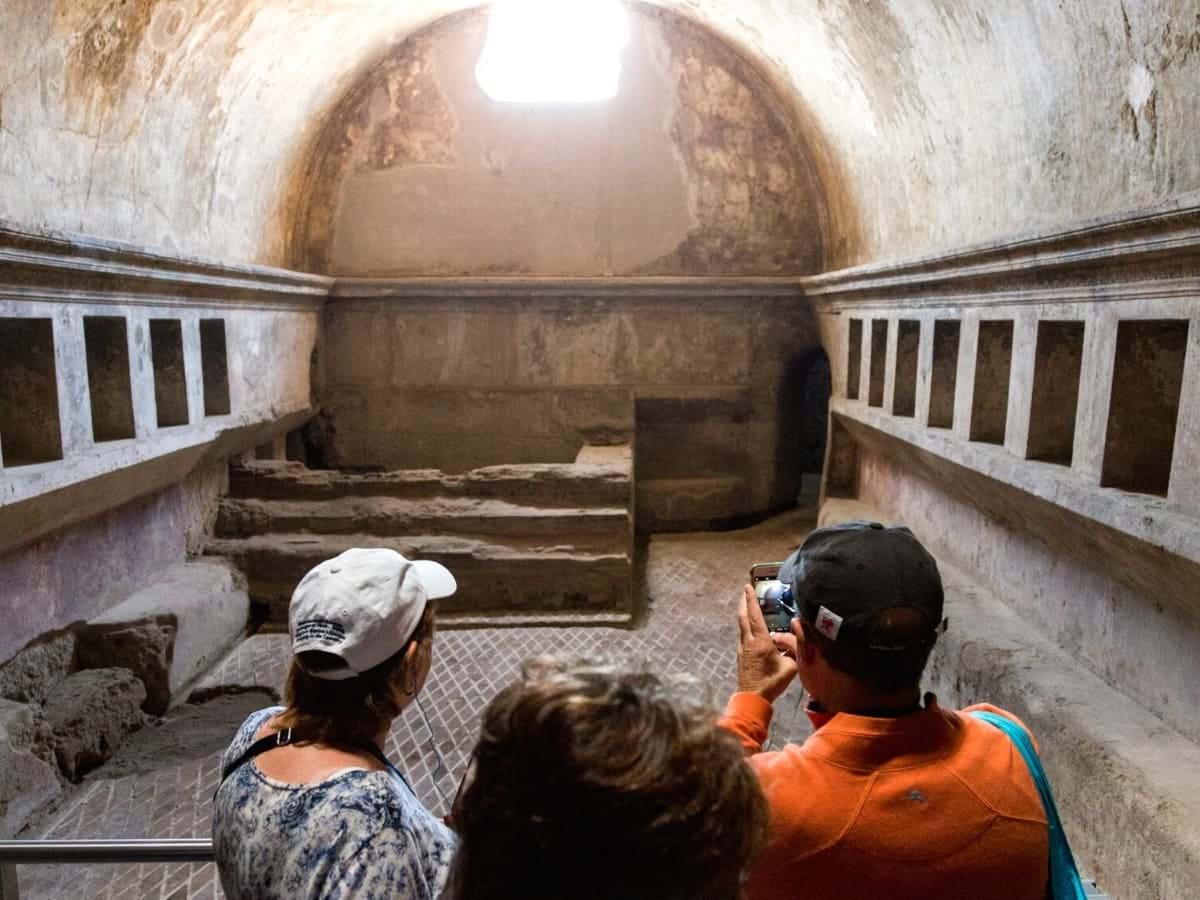 As was common for ancient Roman cities, Pompeii had public baths. These were a pillar of society, somewhere where the rich and poor sat alongside each other to bathe, socialize, and discuss business or politics. Pompeii had three bath houses: the Stabian, Forum and Central Baths.

When Vesuvius erupted, the Central Baths were unfinished - but the Stabian Baths (the oldest preserved public baths in the Roman Empire) and the Forum Baths, which are small but elaborately decorated, offer a fascinating insight into daily life for the Pompeii residents. On a Pompeii tour from Rome visitors can see the public baths, where men and women would bathe separately and the heated water ran through the walls - every sight in Pompeii is a learning experience.

The House and Workshop of Verecundus 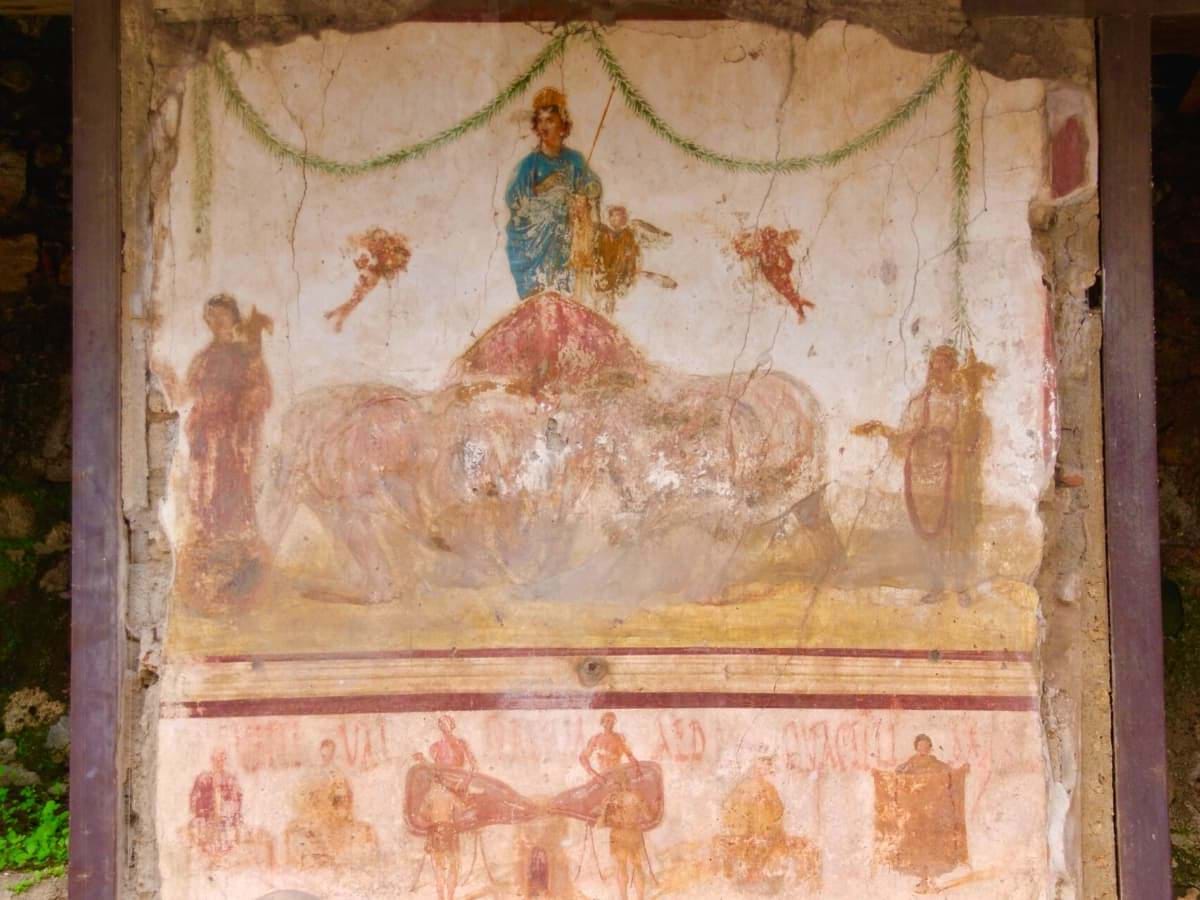 There are many houses around Pompeii, and some of them have workshops that have aided historians in working out what individual residents of the city did for a job. For example, the House and Workshop of Verecundus - which you can see on Rome tours to Pompeii - belonged to dryers and sellers of cloth. As it turns out, this was a popular vocation in Pompeii at the time.

This is a specific example, but there are other workshops you can see when visiting Pompeii that would have been used not only for working, but for the sale of whatever was being made or produced there. These workshops would have been an important part of daily life in ancient Pompeii. 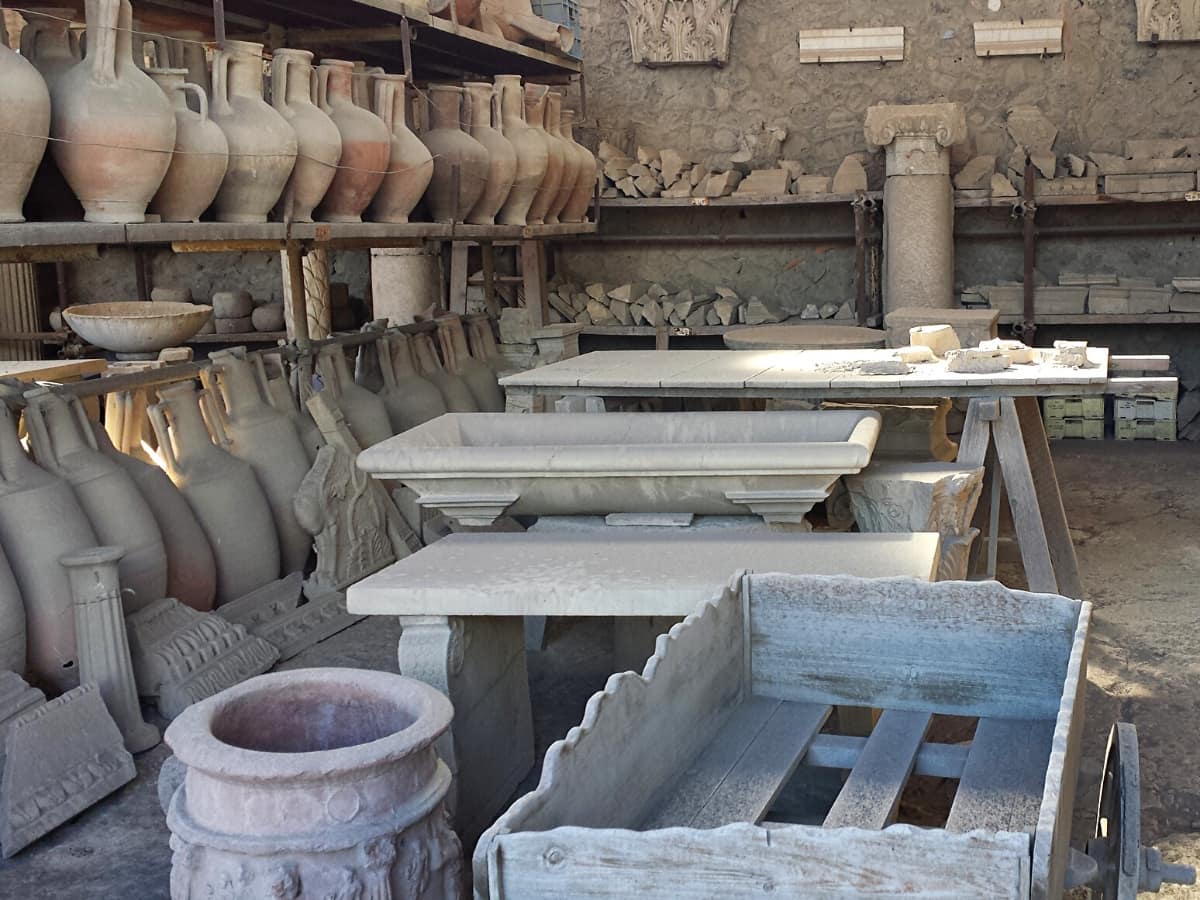 There are many similarities that we can see between the amenities available to the citizens of Pompeii, and those we have today. For example, workshops have evolved into the modern-day factories that produce just about everything: clothing, furniture, technology and more. While the workshops that existed in Pompeii during ancient times relied on much simpler processes, the basic premise is the same. They were making goods that would go on to be sold or exchanged as part of daily life.

While it isn’t common - or indeed legal - to find brothels in most places these days, there are other places that these can be compared to. The brothels were somewhere people went to and exchanged money for a specific service. If you disregard what that particular service is then the brothels can be aligned with beauty salons, massage parlors and other similar places. These are huge part of society nowadays, in the same way that brothels were in Pompeii.

The Macellum of Pompeii is, of course, comparable to a modern-day supermarket or grocery store. There are still independent food markets following the traditional format of individual stalls selling different products: a fish stall, a meat stall, and a fruit and veg stall for example. However, most towns and cities have a supermarket or large grocery store where members of the community will head to do a weekly or monthly grocery shop. With the introduction of modern technology and artificial lighting, stores are open for longer hours and offer a wider variety of food options. The basic premise, though, is still the same!

So, it seems, perhaps, that modern life really isn’t too different to how things were in Pompeii all those years ago. When you choose to tour Pompeii from Rome you will marvel at the city frozen in time, and how the shops and sights are so well preserved. For workshops to houses, the amphitheater to the public baths, there is so much to see in Pompeii that lends an insight into ancient Roman life.