We all know that Barcelona is famous for Gaudí’s masterpieces and Camp Nou stadium. But there’s so much more to this incredible city, which we’ll be chatting about today! This post is bringing you 7 one-of-a-kind attractions that are well worth a visit when in Barcelona. 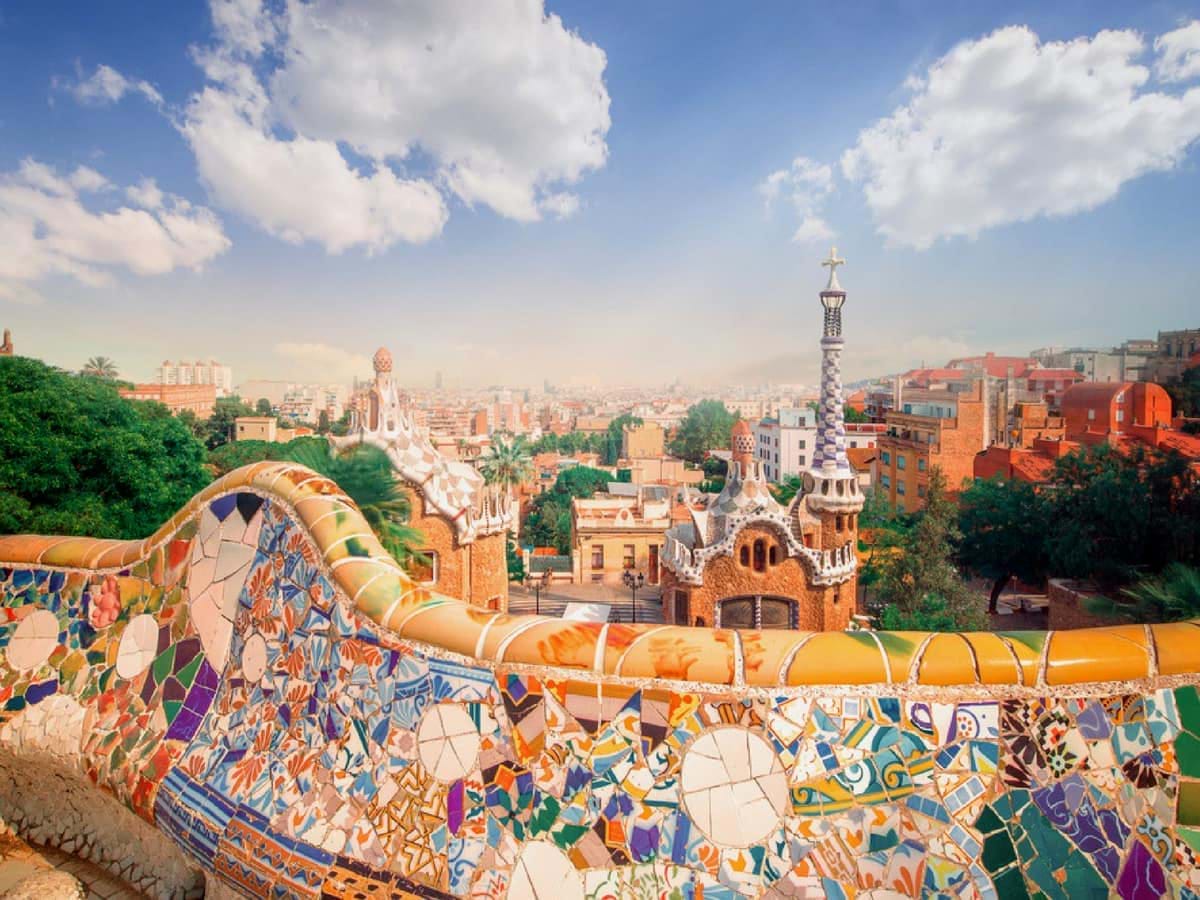 Established as one of Antoni Gaudí’s best works, Park Güell has been solidified as one of Barcelona’s best one-of-a-kind attractions. Found on the southern slope of Mount Carmelo, it’s a public park with gardens and signature architectural pieces. Known for being Catalonia’s greatest representation of modernism, he was commissioned for this work by entrepreneur Eusebi Güell, hence the name. Here is where you’ll see Gaudí’s strong theme of reptilian design with ‘El Drac’ and the famed Serpentine Bench that winds around the park. You’ll also see his signature Trecandís technique, also known as pique assiette, which was a form of mosaic using broken tiles and chinaware. Along with all of the architect's famed creations, you can also visit the Gaudí House Museum and the surrounding forest area. We have an in-depth post on what to see in Park Güell, as well as multiple tours of the park for you to enjoy when you visit Barcelona. 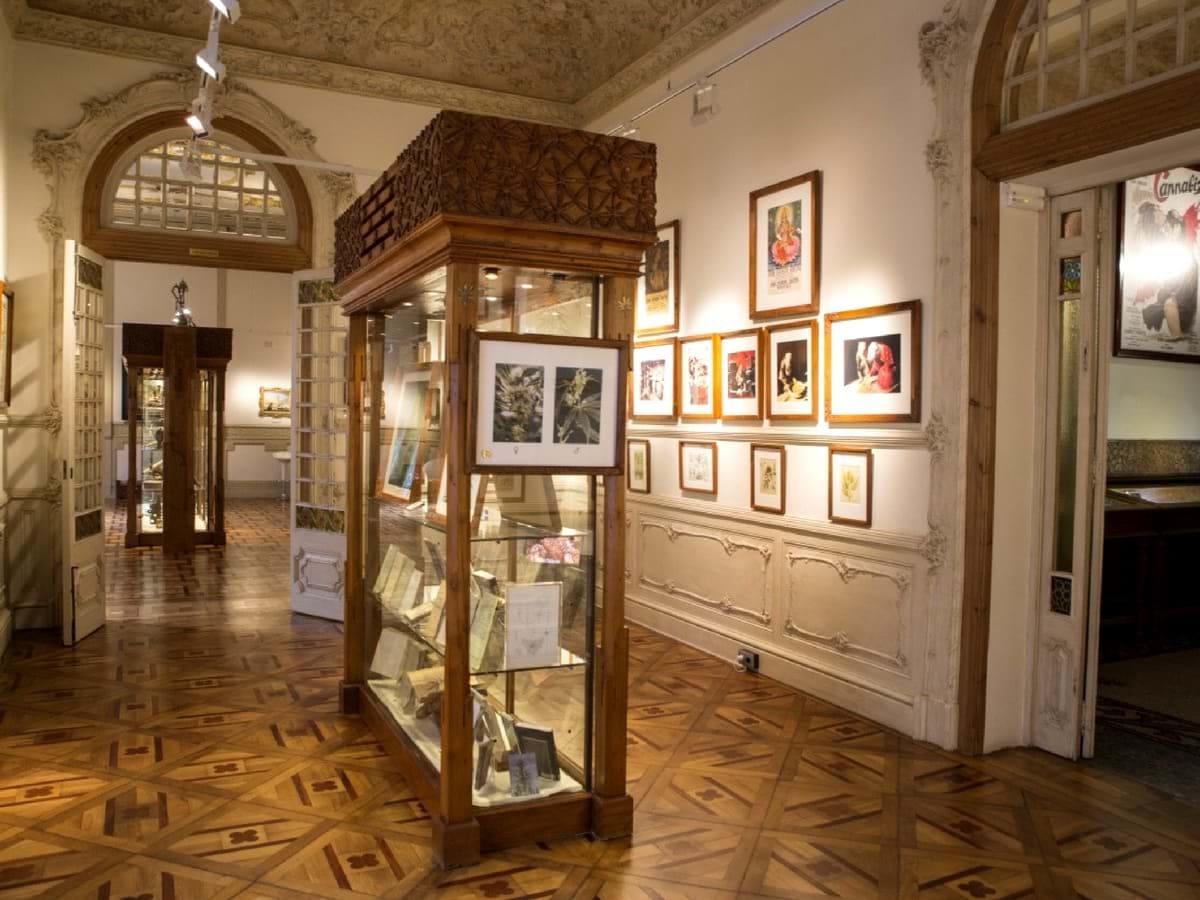 Located in the center of Barcelona in the 15th-century structure Palau Mornau, the aim of the Hemp Museum is to enlighten its audience on the past, present, and future of the cannabis plant. The exhibition showcases how the plant has been used in multiple ways over centuries, specifically for medicinal, nutritional and recreational purposes. Despite the intrigue of the exhibition, many saw that it’s worth a visit purely to witness the beauty of the building that homes the museum. The exhibition teaches visitors about the plant in an engaging, educational and enjoyable way, while still being thorough and concise with the information that they provide. The collection also displays artifacts collected by the museum’s founder, Ben Dronkers, during the forty-year period that he traveled the world. The museum keeps a modern audience in mind, those who have an open mind about the cannabis plant and refrain from demonizing its usage 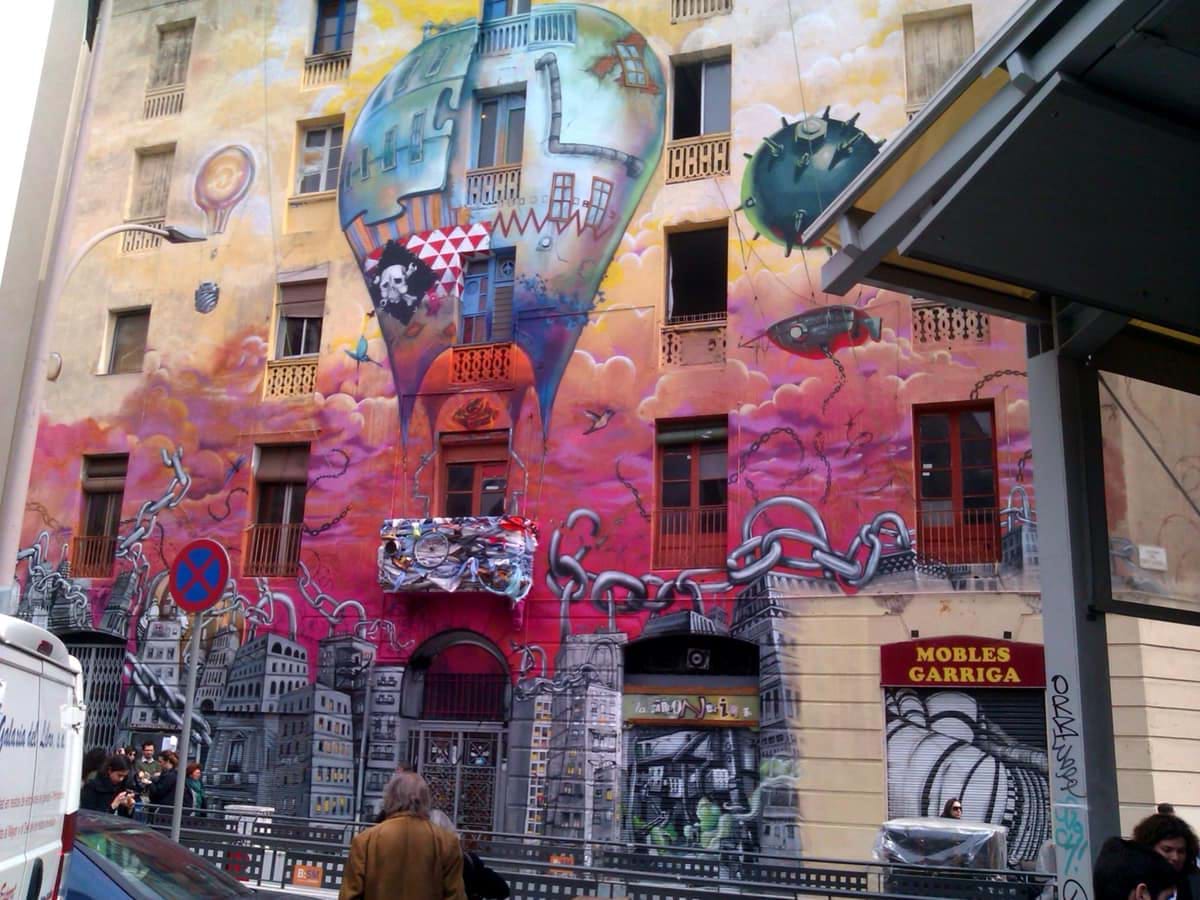 La Carbonería is known as one of Barcelona’s most beautiful buildings, because of the incredible artistic murals that travel along its outer walls. It’s well-known for its Modernista architecture and is one of the most photographed buildings in the city. Built in the 19th century in Barcelona’s Eixample district, it was originally a coal factory. From 2008 until 2014, it was the city’s most famous okupa house – this now-abandoned building was the home for many squatters, who created the distinctive and detailed artwork throughout. The squatters were constantly under threat of eviction by the police, who eventually succeeded in 2014. The building was meant to be demolished following the eviction, but the city council instead categorized it as being of artistic and historical interest. Its exterior is consistently being updated with more artwork, with newer additions consisting of a multi-tonal hot air balloon in the center of the building. When in Barcelona, it’s well worth a visit, even if only for one snap! 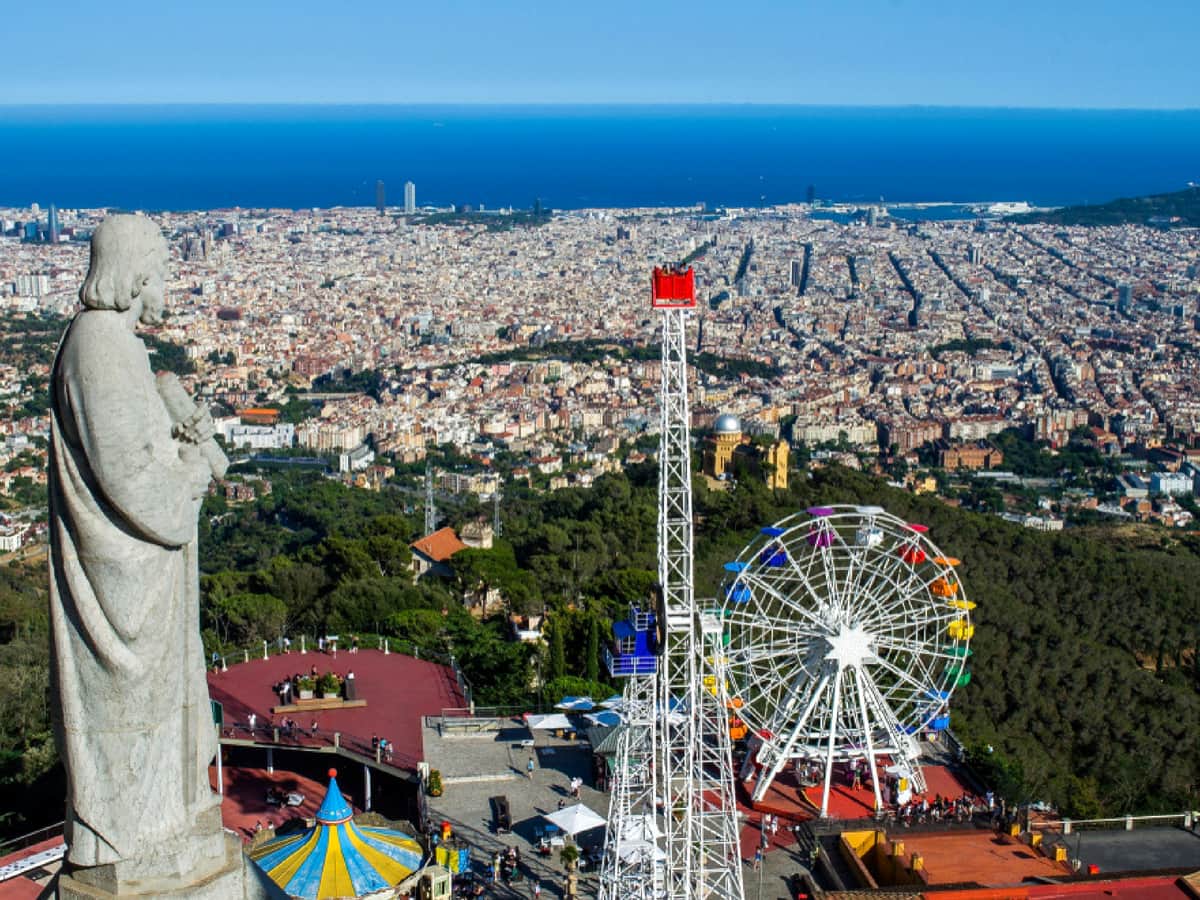 Tibidabo is the highest summit of the Collserola mountain range in Barcelona, reaching a colossal 1680 feet (512 meters). Right at the top of the mountain, you’ll find the Church of the Sacred Heart (also known as the Temple Expiatori del Sagrat Cor or Temple of Tibidabo), which was dedicated to the Sacred Heart of Jesus. From the top of the mountain, you’ll see unbelievable panoramic views of the city, all the way out to the Mediterranean Sea. There’s a lot more where that came from too, including a hundred-year-old theme park. The first features were integrated into Parc d'Attractions del Tibidabo in 1911: an aerial railway and a funicular that brought you to the top of the mountain. Nowadays, the 70,000 square meter park is home to a mini train for transport around the park, a haunted house, an antique carousel, and some roller coasters. To polish off your time at Tibidabo, venture to the Torre de Collserola and the Museu d'Autòmats. 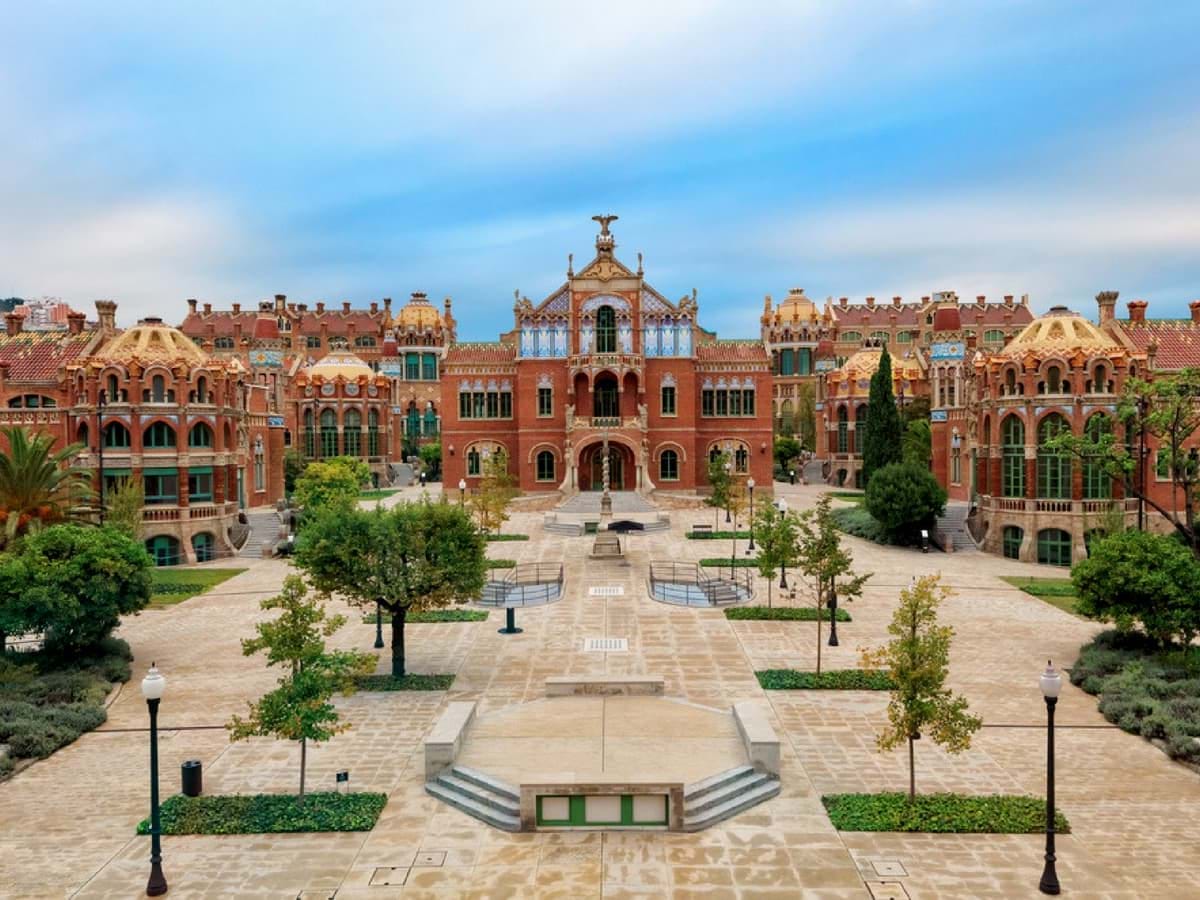 The Sant Pau Art Nouveau site was originally the Hospital de la Santa Creu I Sant Pau, fusing six of Barcelona’s hospitals back in 1401. Also known as the Hospital of the Holy Cross, it was one of Europe’s oldest healthcare centers and is currently one of Barcelona’s more prominent examples of Catalan Civil Gothic architecture. 500 years after it was initially built, the hospital became too small due to a large spurt in population growth. At the beginning of the 20th century, the construction of a new hospital began and was opened to the public in 1930. It contained 27 pavilions and was surrounded by gardens, and also featured a tunnel system used to transfer patients throughout the hospital. In 2014, the restoration work on the former hospital (12 pavilions of it) was completed, and 6 of these pavilions were re-opened as an open-air museum. To see traditional Gothic architecture with a subtly modern twist, a visit to the Sant Pau Art Nouveau site is sure to add insight to your time in Barcelona. 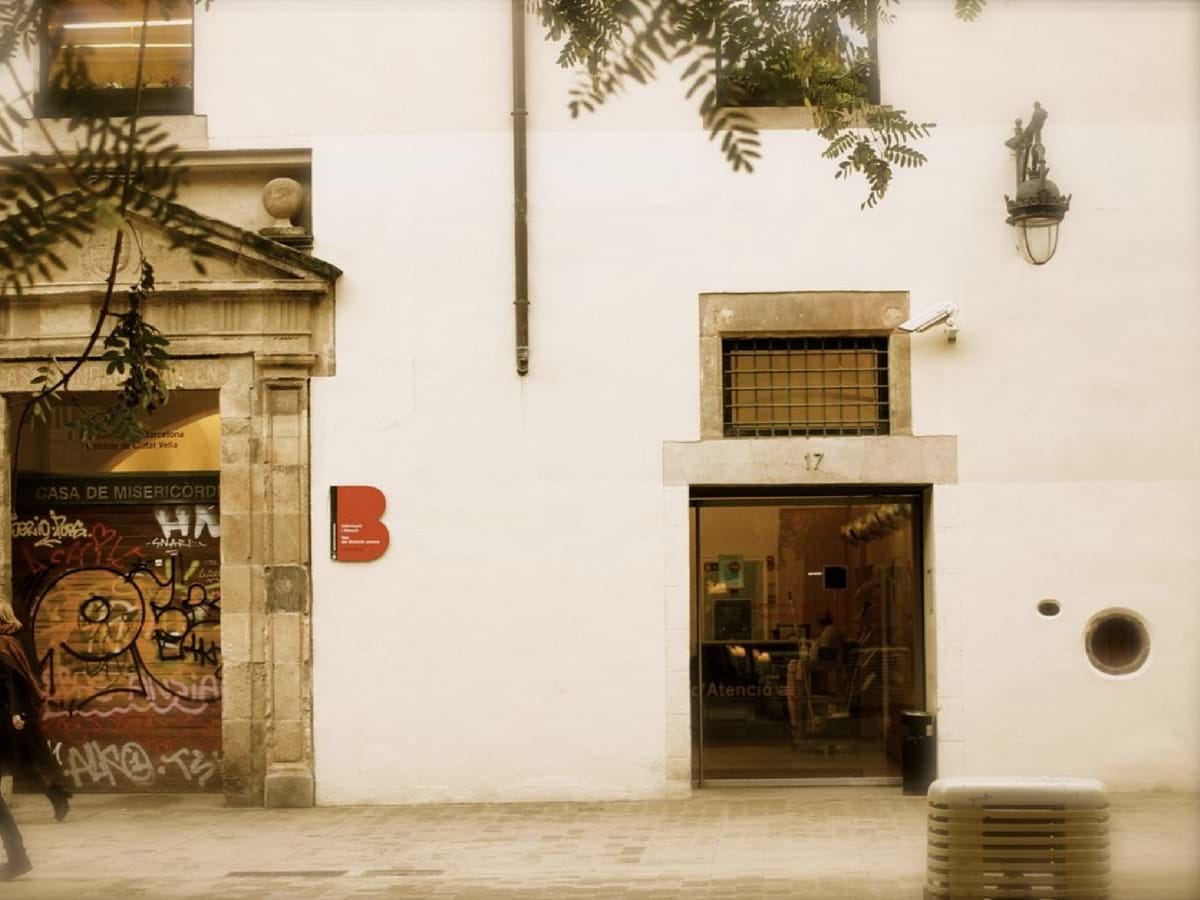 If you happen to pass by the House of Mercy, you may happen to come across a circular wooden outlet in the wall outside. It may look like a decorative element, but it was, in fact, a turntable used to drop off donations for the church. These could include groceries, monetary funds, and unwanted babies. This was most popular between 1853 and 1931 when the building became an orphanage and parents who could or did not want to care for their children would deliver them to the House of Mercy. During this period, the Industrial revolution was rampant, as was the poverty that came with it. The social and religious stigma around illegitimate children was more prevalent than ever, so this could’ve been seen as an easy fix of sorts for many families. The rounded wooden turntable can still be seen today outside 17 Carrer de les Ramelleres in Barcelona. 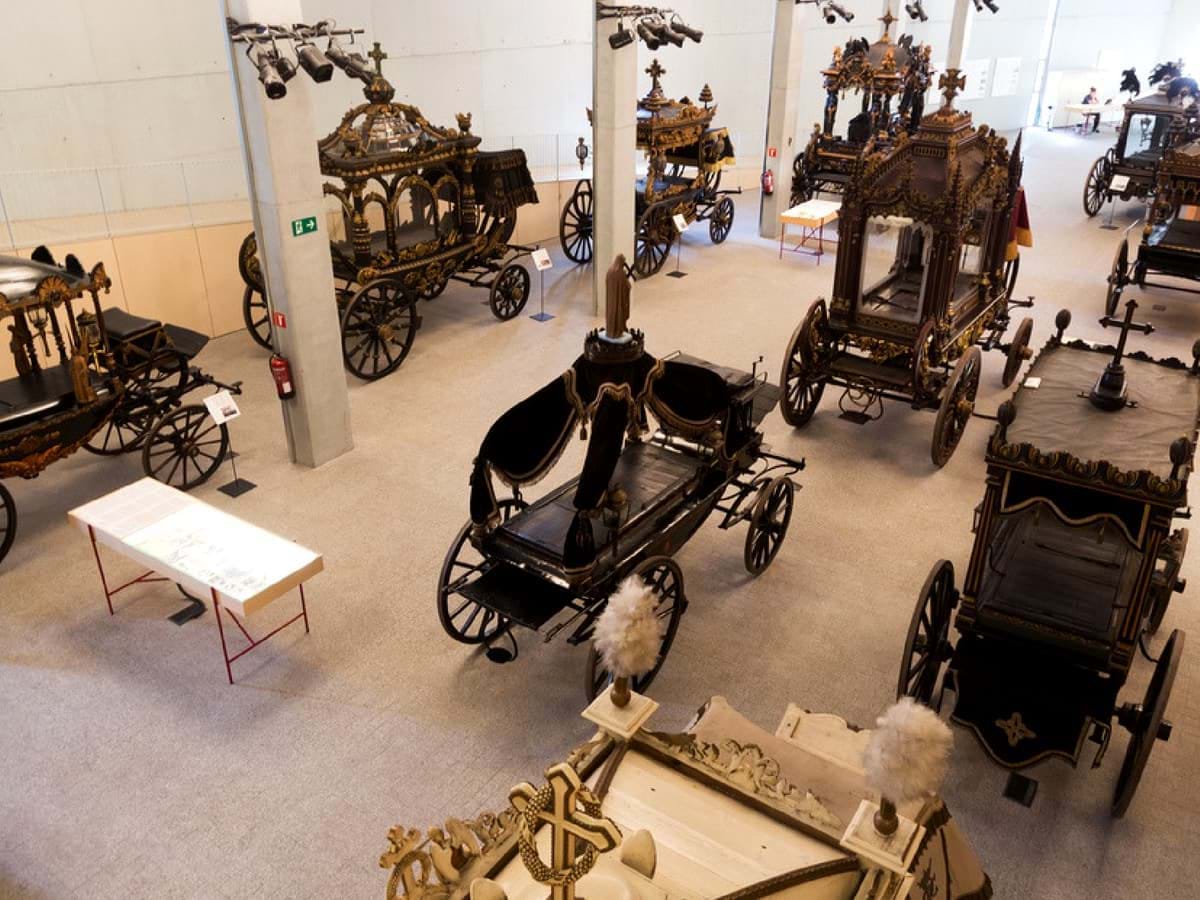 Museu de Carrosses Fúnebres, or the Collection of Hearses are other names for Barcelona’s Funeral Carriage Museum. Created in 1970, the collection presented 19 original pieces, varying between horse-drawn carriages, accompanying cars and motor hearses. As the only collection of hearses in Europe, it aims to show how the transportation of the deceased has changed and developed over the centuries. The exhibition is updated semi-regularly, usually with new technologies and web applications. Located within the Montjuïc Cemetery, it’s one of Barcelona’s unique museums, despite not being as well-known as some of the city’s other attractions. If delving into Barcelona’s more niche historical traditions takes your fancy, then we can’t help but recommend a visit to the Funeral Carriage Museum.

More unusual things to do in Barcelona:

And for some Barcelona favorites, take a peek at our list of extensive tours!

Cocktails with a View - the Most Scenic Drinking Spots in Paris