New Year’s Eve is an exciting celebration - for many it marks the end of the holiday season and signifies and a new year. It’s an opportunity to celebrate in style with friends, family and neighbors whether you’re dancing the night away or having a more laid-back evening. If you plan to visit Barcelona, London, Rome or elsewhere in Europe over New Year’s Eve this year, then here’s how you can celebrate… 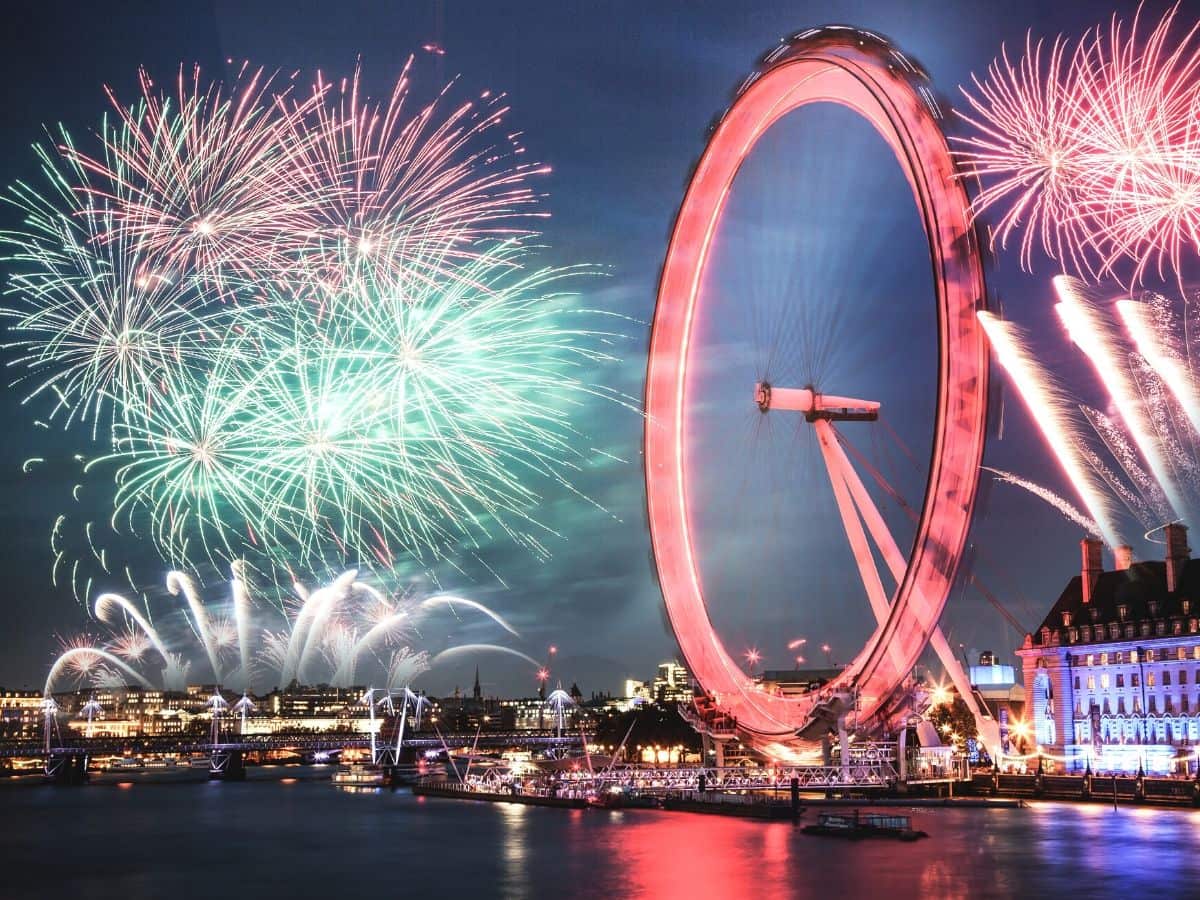 The main way to celebrate New Year’s Eve in London is to attend the firework display along the Victoria Embankment and South Bank areas of the River Thames. Underneath Big Ben and the London Eye, crowds gather to count down until midnight - accompanied by the famous clock’s chimes, too! In recent years, a digital countdown has been projected onto the side of the Shell Center. The fireworks are always absolutely magical, a spectacle of color that welcomes in the new year in style - a London city tour can you show you the sights, and you’ll be able to see them lit up as the new year begins.

There are other ways to celebrate, though. Silent Sounds are hosting a NYE Silent Disco at The Secret Warehouse, which kicks off at 9pm and is open to over 18s only. The event is ticketed and looks to be something fun and a bit different! If you do still want to see the Thames midnight fireworks but fancy a bit of a party too, Pukka Up have planned a river cruise complete with house music, bubbly, outdoor areas and an after party. Also ticketed and 18+, this is a brilliant way to escape the hordes of people and still have some fun. 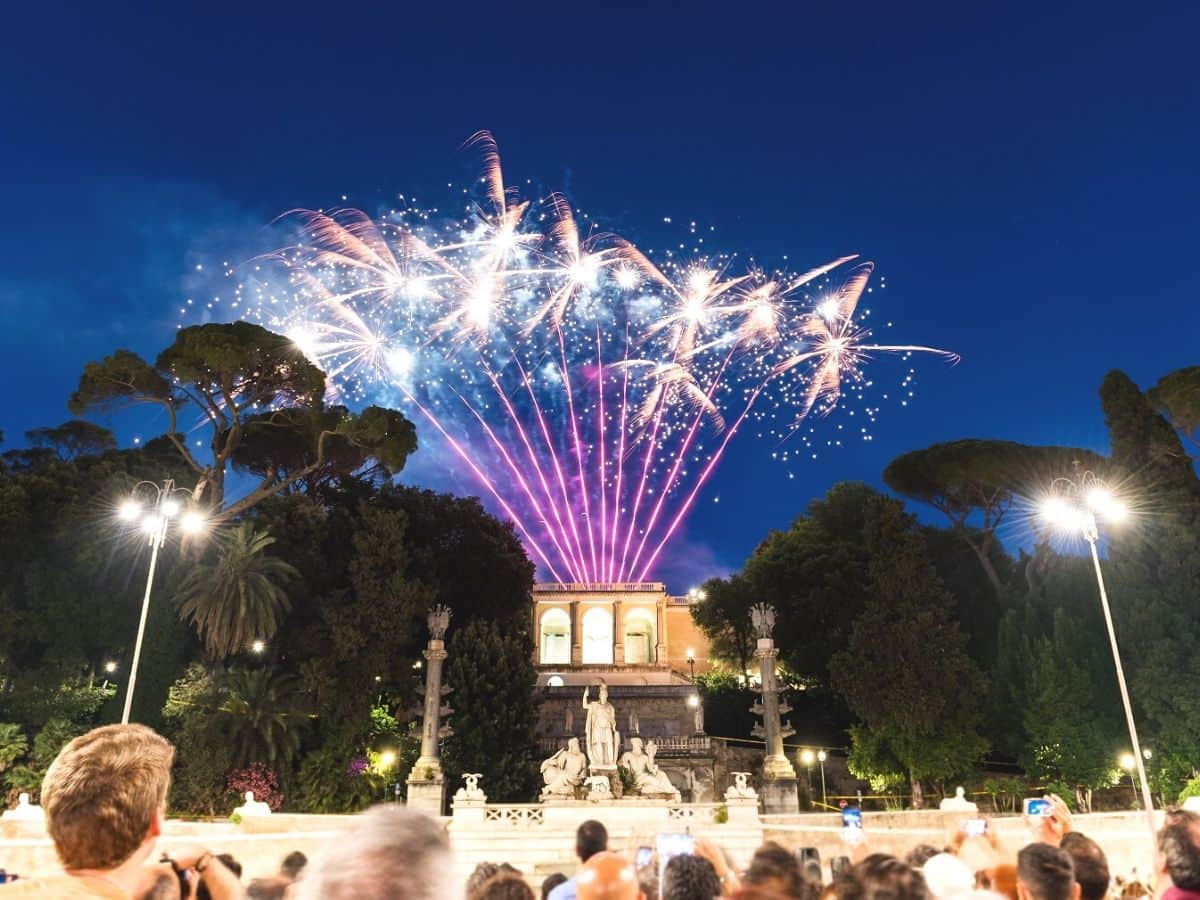 If you happen to be spending the new year in Rome, you can also catch an amazing firework display. The biggest and best take place in three different locations:

Head to one of the seven hills you can see during your tour of Rome or a rooftop bar to catch the best views out across the city, meaning you can see all of the sparkling fireworks as the clock strikes midnight. However, if you want to party alongside the fireworks then Circus Maximus is your best bet: storytelling, an orchestra, acrobatics and a post-midnight DJ set from British pop icon Skin.

For something more traditional, you might want to attend the New Year’s Eve concert by The Three Tenors. This is ticketed and will take place at the Oratory of St. Francies Xavier del Caravita at 9pm. 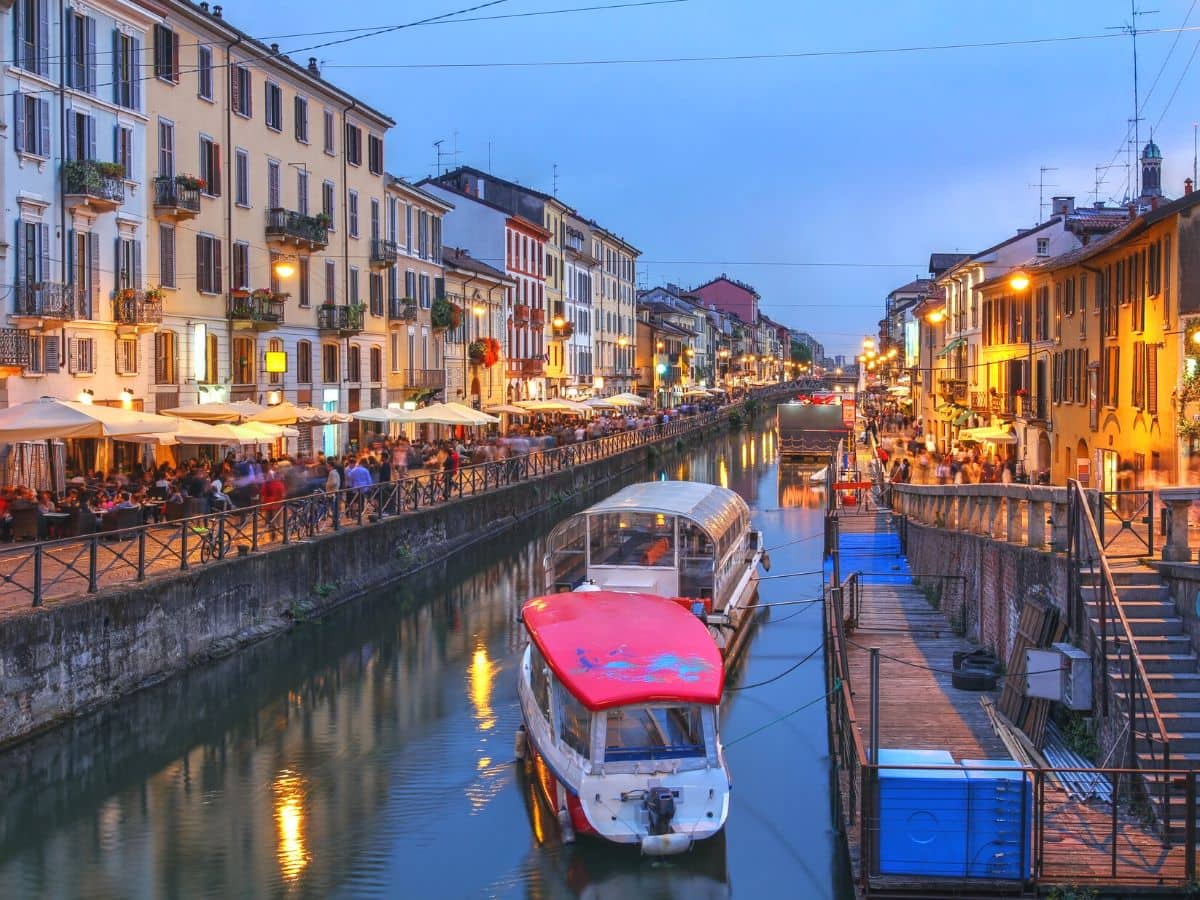 Being in the beautiful city of Milan over the new year is bound to be special. There are two main celebrations taking place on New Year’s Eve, in Piazza Duomo and Piazza Castello. You’ll be able to scope both of the squares out on one of our Milan tours! In Piazza Duomo on New Year’s Eve you can enjoy a free performance from various Italian musicians, which starts at 8pm, before they set off the fireworks from Piazza Castello. The two squares are within walking distance of each other, too.

Bars, restaurants and club across the cosmopolitan city are hosting swanky New Year’s Eve parties. Most are free and some require pre-paid tickets, but all have a glamorous edge to them! 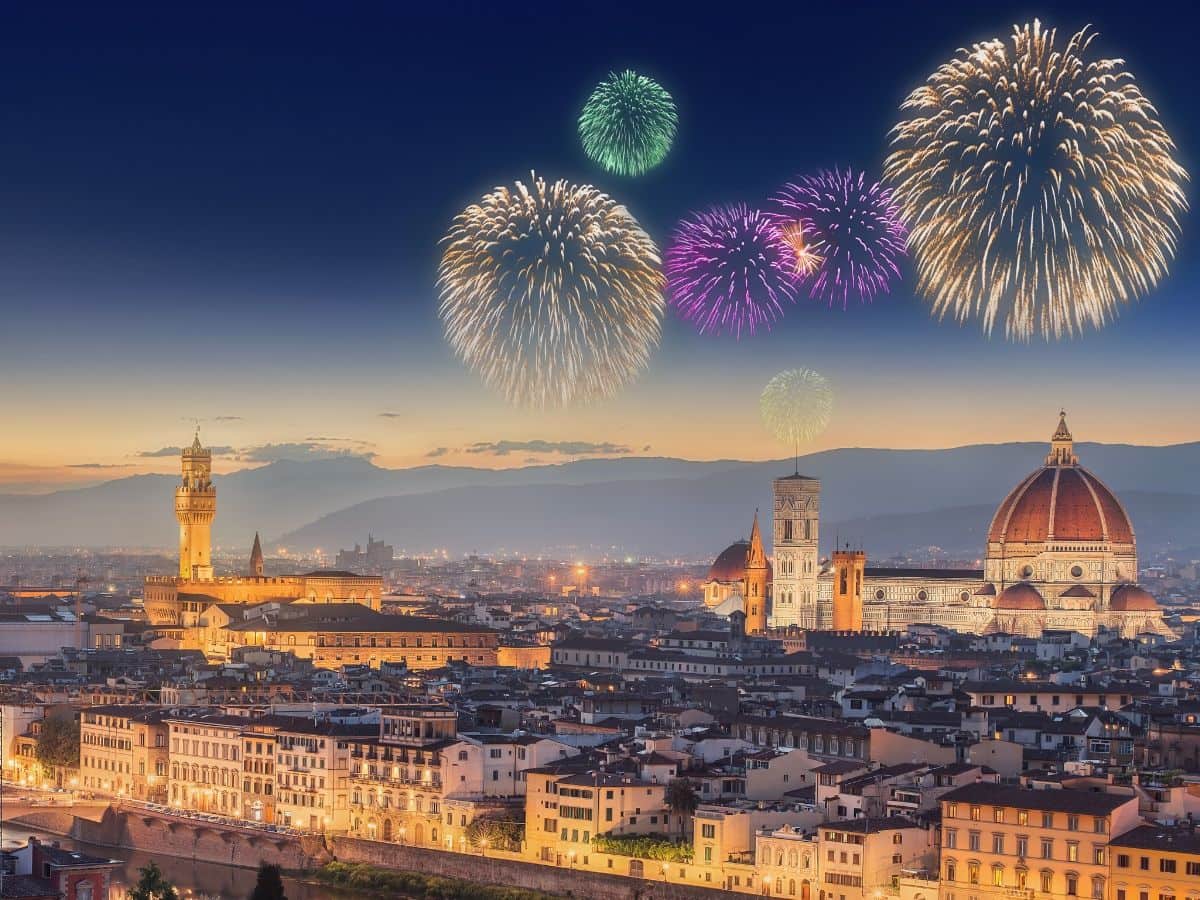 The capital of Tuscany, Florence is a bit more laid back than other Italian cities. Celebrations will take place in Piazzale Michelangelo (including live music, DJs, and fireworks) and many bars, hotels and restaurants have entertainment and special menus to help you celebrate in style. You may spot somewhere while on a tour of Florence that looks like the perfect place to see in 2020!

Day trips from Rome to Florence are popular, and it can be nice to get away from the hustle and bustle to enjoy more peaceful celebrations. 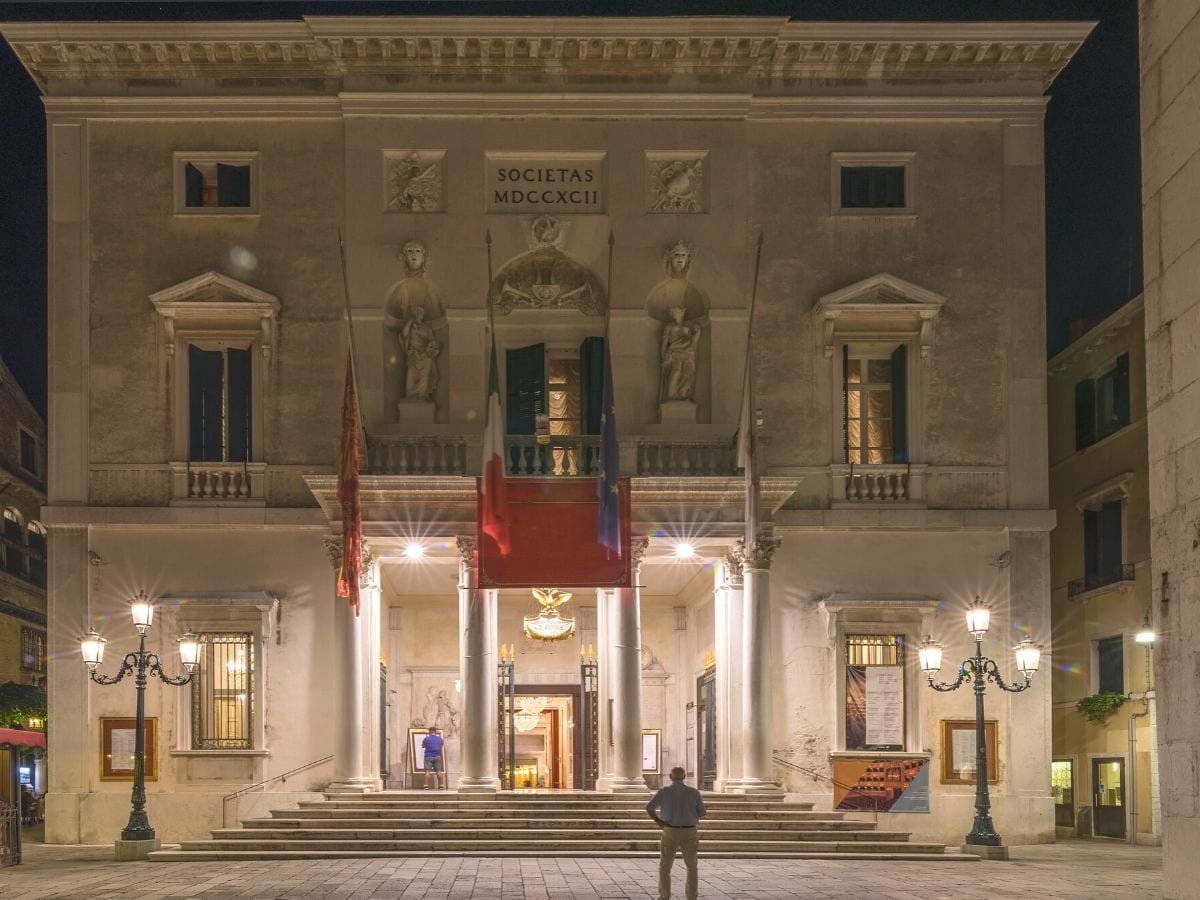 If Venice is calling your name over the holiday season, then you have plenty of options to choose from to celebrate New Year’s Eve. The main one, of course, is the variety of boat parties taking place across the city’s canal network. Complete with dinner, music and dancing, many of the boat parties head to St. Mark’s Bay just before midnight. This allows everyone to see the beautiful firework display that takes place to bring in the new year from St. Mark’s Square. You’ll have likely visited the square during a walking tour of Venice, so this is a great opportunity to catch it from a different angle. There will also be a feast following the fireworks, and public transport services have been extended until later than usual for those not staying in the city center.

If fireworks aren’t your thing, consider heading to an orchestral concert at La Fenice Theater. With instrumental sections and a choir too, it promises to be a beautiful evening. Bars and restaurants across the city also offer a lovely way to bring in the new year! If you want to scope some places out beforehand, the best Venice tours will help you find the perfect spot. 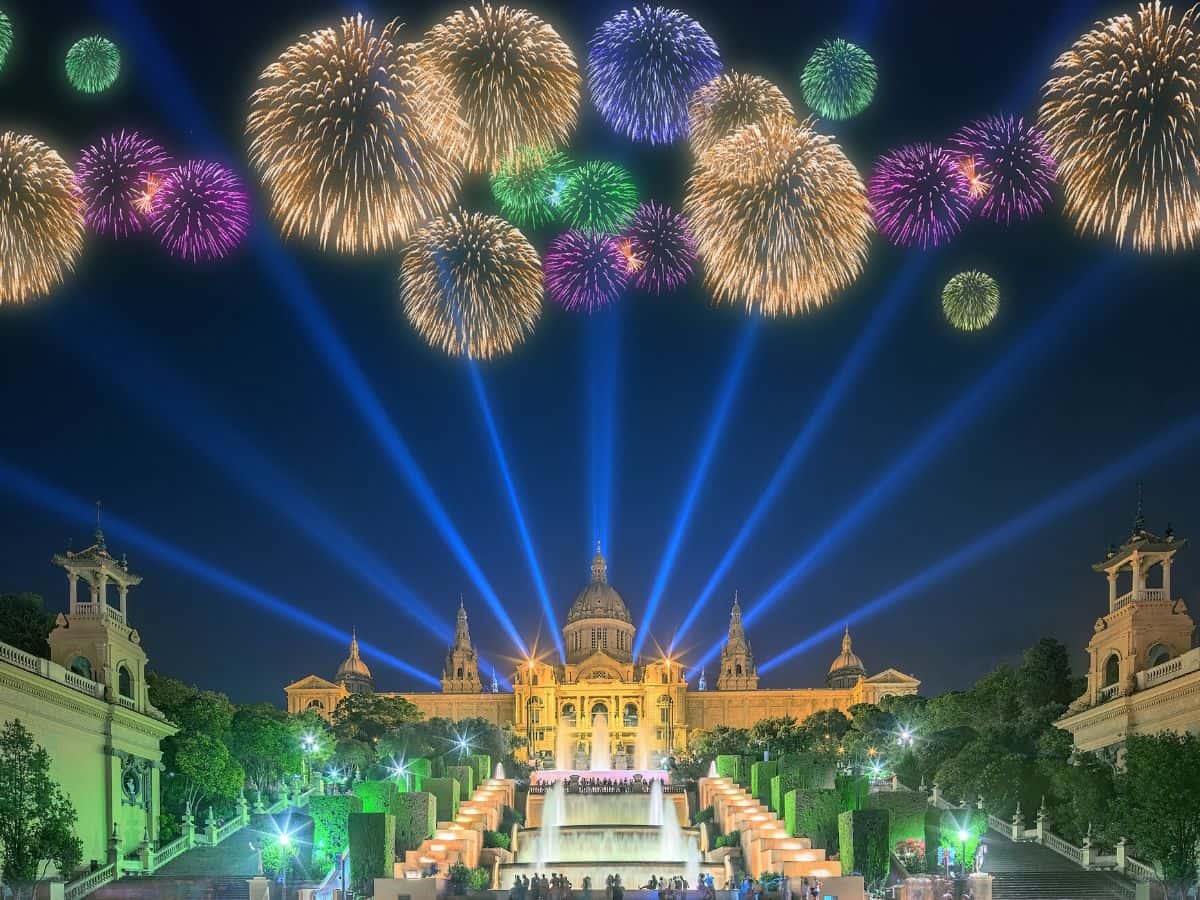 For an unmissable firework display in Barcelona on New Year’s Eve, head to Plaça d’Espanya or spread out along Avinguda de la Reina Maria Cristina towards the foot of Montjuïc. With live music and other performances, and the aforementioned fireworks, if you want to ring in 2020 with locals and other visitors then this is the perfect place to do so! A tour of Barcelona beforehand will help you get your bearings, too.

Barcelona has a local tradition, too: eating 12 grapes before the 12 strokes of midnight end - so be sure to join in with that wherever you are. Poble Espanyol, the open-air architecture museum in the city, hosts New Year’s Eve celebrations as well which are popular with a younger crowd.

The French capital host their countdown at the Champs-Elysée, though it extends across the city - just before midnight a beautiful light show is projected onto the Arc de Triomphe ahead of the fireworks when the clock strikes twelve. Paris tours will help you get your bearings on the city and choose the perfect place to watch the celebrations.

Other options if you’re planning to visit Paris this winter include a river cruise or going to watch a cabaret show - these are less crowded but equally as special ways to say goodbye to 2019 and see in the new year.

There are so many ways to celebrate the new year across Europe; whether you take one of our London tours and then head to the Thames to watch the fireworks, or go on the best Florence tour followed by a relaxing evening in the city, there is bound to be something exciting going on that suits you.

A Guide to Architecture at the Vatican

Why You Need to Visit Paris